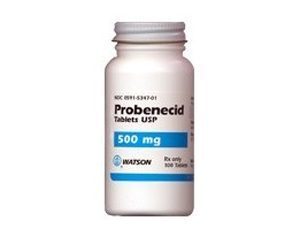 Pharmacopoeias. In China, Europe, International, Japan and US.

Probenecid may cause nausea, vomiting, anorexia, headache, sore gums, flushing, alopecia, dizziness, anaemia, and urinary frequency. Hypersensitivity reactions, with fever, dermatitis, pruritus, urticaria, and, rarely, anaphylaxis, and Stevens-Johnson syndrome have occurred. There have been reports of leucopenia, hepatic necrosis, nephrotic syndrome, and aplastic anaemia. Haemolytic anaemia has also occurred, and may be associated with G6PD deficiency. When used in chronic gout, and particularly during the first few months of therapy, probenecid may precipitate acute attacks. Uric acid renal calculi, with or without haematuria, costovertebral pain and renal colic may occur.

In massive overdosage probenecid causes stimulation of the CNS, with convulsions and death from respiratory failure. Severe overdosage should be managed by lavage and symptomatic treatment.

Probenecid therapy should not be started during an acute attack of gout; however treatment is usually continued when acute attacks occur in patients already receiving the drug, and the acute attack is treated separately. Probenecid is also unsuitable for the control of hyperuricaemia secondary to cancer or cancer chemotherapy. Probenecid should not be given to patients with a history of uric acid renal calculi or blood disorders. It should be used with caution in patients with a history of peptic ulceration. Probenecid should not be used as an antibacterial adjunct in patients with known renal impairment, and it is ineffective in gout in patients with severe renal impairment. To reduce the risk of uric acid renal calculi in patients with gout an adequate fluid intake (2 to 3 litres daily) is required, and, if necessary, especially during the first few months of treatment, sodium bicarbonate or potassium citrate may be given to render the urine alkaline. A reducing substance has been found in the urine of some patients taking probenecid, and may give false positive results with some tests for glucose in the urine. Probenecid reduces the excretion of some iodinated contrast media and may interfere with laboratory tests by decreasing the excretion of aminohippuric acid, phenolsulfonphthalein, and sulfobromophthalein.

Abuse. It has been alleged that some athletes using banned anabolic steroids have taken probenecid in an attempt to inhibit the urinary excretion of steroid metabolites in order to avoid detection by urine screening tests.

Porphyria. Probenecid is considered to be unsafe in patients with porphyria although there is conflicting experimental evidence of porphyrinogenicity. 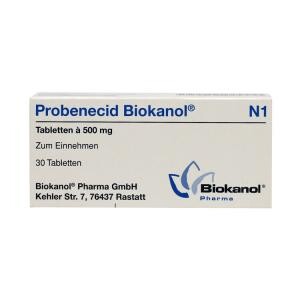 The dose of probenecid may need to be increased if patients are also given drugs, such as diuretics or pyrazinamide, that increase the blood concentration of uric acid. Salicylates, including aspirin, and probenecid are mutually antagonistic and should notbe given together. Probenecid may also affect many other drugs. By inhibiting renal tubular secretion, it has the potential to increase the toxicity and/or to enhance the therapeutic efficacy of drugs excreted by that route. In some instances a reduction in dose is essential to counteract an increase in toxicity, as is the case with methotrexate. Some combinations, such as that with ketorolac, should be avoided. Conversely, probenecid may be given with some antibacterials such as the penicillins and cephalosporins to increase their effects.

Altered excretion may also increase serum concentrations of other antibacterials (aminosalicylic acid, conjugated sulfonamides, dapsone, meropenem, some quinolones, rifampicin), some antivirals (aciclovir, ganciclovir, zalcitabine, zidovudine, and possibly famciclovir), some benzodiazepines (adinazolam, lorazepam, and nitrazepam), some ACE inhibitors (captopril and enalapril), some NSAIDs (diflunisal, indometacin, ketoprofen, meclofenamate, naproxen), paracetamol, and sulfonylurea hypoglycaemic drugs. The clinical significance of such interactions is not entirely clear although the possibility of the need for a reduction in dosage of these drugs should be borne in mind.

Reducing the urinary concentration of some drugs could diminish their activity in certain diseases as might happen with nitrofurantoin or some quinolones in urinary-tract infections and penicillamine in cystinuria.

Allopurinol. Probenecid may increase the clearance of allopurinol despite an increased hypouricaemic effect when these 2 drugs are given together (see Antigout Drugs, under Allopurinol).

Probenecid is completely absorbed from the gastrointestinal tract with peak plasma concentrations achieved 2 to 4 hours after a dose. It is extensively bound to plasma proteins (85 to 95%). The plasma half-life is dose-dependent and ranges from less than 5 to more than 8 hours. Probenecid crosses the placenta. It is metabolised by the liver, and excreted in the urine mainly as metabolites. Excretion of unchanged probenecid is increased in alkaline urine.

Probenecid has no analgesic or anti-inflammatory action and is of no value in acute gout. Initially it may increase plasma concentrations of urate and uric acid by dissolving deposits. This can trigger or exacerbate acute attacks, hence probenecid should not be started until an acute attack has completely subsided, and an NSAID or colchicine may be given during the first few months.

It is usual to start treatment for gout with oral doses of 250 mg twice daily increased after a week to 500 mg twice daily and later, if the therapeutic effects are inadequate, by increments of 500 mg every 4 weeks, up to 2 g daily. Probenecid may not be effective in chronic renal impairment particularly when the glomerular filtration rate is less than 30 mL/minute. An adequate fluid intake is required to reduce the risk of uric acid renal calculi.

When the patient has been free from acute attacks for at least 6 months, and provided that the plasma-urate concentration is within acceptable limits, the daily dose may be gradually reduced, by 500 mg every 6 months, to the lowest effective maintenance dose which is then given indefinitely

Probenecid may also be used as an adjunct to antibacterial therapy particularly when treating severe or resistant infections. It reduces the tubular excretion of penicillins and most cephalosporins and may increase their plasma concentrations up to fourfold. The usual dosage for reducing tubular excretion of penicillins and cephalosporins is 500 mg four times daily, or less in elderly patients with suspected renal impairment. When renal impairment is sufficient to retard the excretion of antibacterials, probenecid should not be given. The dosage for children over 2 years of age and weighing less than 50 kg is 25 mg/kg (700 mg/m) initially, followed by 10 mg/kg (300 mg/m) every 6 hours.

Single oral doses of probenecid 1 g are given with a suitable oral antibacterial, or at least 30 minutes before an injected antibacterial, in the single-dose treatment of gonorrhoea.

The United States Pharmacopeia 31, 2008, and Supplements 1 and 2: Ampicillin and Probenecid for Oral Suspension; Probenecid and Colchicine Tablets; Probenecid Tablets.

The symbol ¤ denotes a preparation which is discontinued or no longer actively marketed.