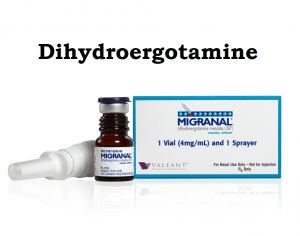 Pharmacopoeias. In Europe , Japan, and US.

European Pharmacopoeia, 6th ed., 2008 and Supplements 6.1 and 6.2 (Dihydroergotamine Mesilate). Colourless crystals or a white or almost white crystalline powder. Slightly soluble in water and in alcohol; sparingly soluble in methyl alcohol. A 0.1% solution in water has a pH of 4.4 to 5.4. Protect from light.

European Pharmacopoeia, 6th ed., 2008 and Supplements 6.1 and 6.2 (Dihydroergotamine Tartrate). Colourless crystals or a white or almost white crystalline powder. Very slightly soluble in water; sparingly soluble in alcohol. A 0.1 % suspension in water has a pH of 4.0 to 5.5. Protect from light.

As for Ergotamine Tartrate, although vasoconstriction may be less pronounced and the frequency of nausea and vomiting lower with dihydroergotamine mesilate than with ergotamine tartrate. Dihydroergotamine does not appear to produce physical dependence. 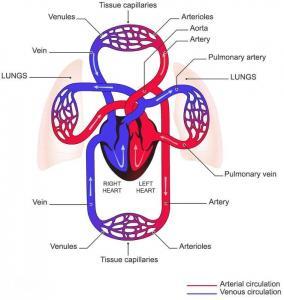 Effects on the cardiovascular system. There are conflicting reports on the risk of vasospasm in patients given dihydroergotamine with heparin for thromboembolism prophylaxis. Vasos-pastic or necrotic reactions have been reported on several occasions during such therapy. In an Austrian study of 147 290 patients given drug prophylaxis for thromboembolism, complications attributable to ergotism were seen in 142 of 61 092 (0.23%) who received dihydroergotamine and heparin. Others, however, observed only 1 case of vasospasm in 5100 trauma patients (0.02%) given the combination. In 1989 the Swedish Adverse Drug Reactions Advisory Committee reported that up to the end of September 1987 the manufacturer had received 201 reports of vasospastic reactions associated with the use of Orstanorm (dihydroergotamine + lidocaine) with heparin. Permanent damage occurred in 59% of these patients. Vasospastic reactions had occurred more frequently in patients who had undergone surgery for trauma and the prognosis for such patients was generally poorer than for others. Since the risk of permanent damage appeared to be related to treatment length the Committee recommended that this preparation should not be given for more than 7 days. The possibility of such reactions and the contra-indications of dihydroergotamine should be borne in mind when using this form of prophylaxis (see Venous Thromboembolism, under Uses, below).

Fibrosis. For reference to flbrosis associated with the administration of dihydroergotamine, see Methysergide Maleate.

Porphyria. Dihydroergotamine has been associated with acute attacks of porphyria and is considered unsafe in porphyric patients.

Use with other vasoconstrictive drugs, including supplementary antimigraine treatment with ergotamine or sumatriptan, should be avoided.

Dihydroergotamine is a semisynthetic ergot alkaloid that has weaker oxytocic and vasoconstrictor effects than ergotamine. Its activity as a 5-HT1 agonist is believed to contribute to its antimigraine action. It is used in the treatment of migraine and cluster headache, and in the treatment of orthostatic hypotension. It has also been used for the prophylaxis of venous thromboembolism (see below).

Dihydroergotamine is commonly used as the mesilate by subcutaneous, intramuscular, or intravenous injection, although it may also be given as a nasal spray or orally.

For the treatment of migraine and to terminate an acute attack of cluster headache, dihydroergotamine mesilate is usually given by subcutaneous or intramuscular injection in doses of 1 mg repeated, if necessary, after 30 to 60 minutes up to a maximum daily dose of 3 mg. If a more rapid effect is desired it may be given intravenously in doses of 0.5 or 1 mg up to a maximum daily dose of 2 mg. The total weekly dose given by any route of injection should not exceed 6 mg. The usual nasal dose of dihydroergotamine mesilate for an acute attack of migraine is 500 micrograms sprayed into each nostril as a 0.4% solution followed after 15 minutes by an additional 500 micrograms in each nostril. A total intranasal dose of 2 mg per attack should not be exceeded. In the USA, the maximum dose in 24 hours is 3 mg and in a 7-day period is 4 mg, while maximum daily doses of up to 4 mg with a maximum dose of 12 mg in a 7-day period have been given in other countries. In some countries it is given orally; up to 10 mg daily has been given orally for the treatment of acute attacks of migraine. Lower oral doses have been given in some countries for migraine prophylaxis.

Dihydroergotamine mesilate has also been used alone or with etilefrine hydrochloride (p. 1284) in the treatment of orthostatic hypotension, in usual oral doses of up to 10 mg daily in divided doses. Doses of up to 40 to 60 mg have been used in some patients.

Dihydroergotamine tartrate has been used for indications similar to those of the mesilate.

Orthostatic hypotension. Dihydroergotamine may be of use in patients with refractory orthostatic hypotension. It is sometimes used in preparations with sympathomimetics such as etilefrine. After parenteral dihydroergotamine, standing blood pressure is increased, but total peripheral resistance and supine blood pressure are also increased. It does not prevent postprandial hypotension, presumably because it does not constrict the splanchnic veins, although use with caffeine may overcome this problem. The main disadvantage of dihydroergotamine, however, is that it is ineffective, or at best weakly effective, when given by mouth, although there has been some evidence that oral ergotamine tartrate may be of value.

Venous thromboembolism. Standard prophylaxis for surgical patients at high risk of venous thromboembolism is usually with heparin or low-molecular-weight heparin. Dihydroergotamine can reduce venous stasis by vasoconstriction of capacitance vessels and has enhanced postoperative prophylaxis when used with heparin. Doses of dihydroergotamine mesilate 500 micrograms with heparin 5000 units, both given subcutaneously 2 hours before surgery, have been used. This regimen has then been given every 8 to 12 hours for 5 to 14 days depending on the risk of thrombosis. The use of dihydroergotamine with low-molecular-weight heparin has been shown to be of similar efficacy to dihydroergotamine with heparin but might offer a more convenient dosing schedule. However, although dihydroergotamine might enhance the effect of heparin, a US National Institutes of Health consensus conference warned of the potential risk associated with its vasoconstrictive effects, and the contraindications to its use. In 1989 the Swedish Adverse Drug Reactions Advisory Committee recommended that dihydroergotamine with heparin should not be given for more than 7 days (see Effects on the Cardiovascular System, under Adverse Effects, above).

The United States Pharmacopeia 31, 2008, and Supplements 1 and 2: Dihydroergotamine Mesylate Injection.