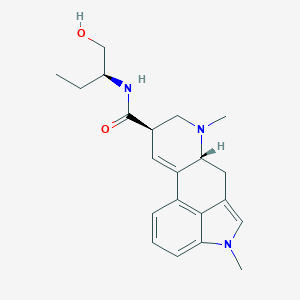 Pharmacopoeias. In British and US.

British Pharmacopoeia 2008 (Methysergide Maleate). A white or almost white crystalline powder which may have a yellow or pink tinge; odourless or almost odourless. Slightly soluble in water and in methyl alcohol; practically insoluble in chloroform and in ether. A 0.2% solution in water has a pH of 3.7 to 4.7. Store at a temperature of 2° to 8°. Protect from light.

The United States Pharmacopeia 31, 2008, and Supplements 1 and 2 (Methysergide Maleate). A white to yellowish-white or reddish-white, crystalline powder. Is odourless or has not more than a slight odour. Soluble 1 in 200 of water and 1 in 165 of alcohol; soluble 1 in 3400 of chloroform; practically insoluble in ether. pH of a 1 in 500 solution is between 3.7 and 4.7. Store in airtight containers at a temperature of 2° to 8°. Protect from light.

Gastrointestinal effects such as nausea, vomiting, heartburn, and abdominal pain are common on initial treatment with methysergide maleate, as are dizziness and drowsiness. Other CNS effects reported include ataxia, insomnia, weakness, restlessness, lightheadedness, euphoria, and hallucinations. Peripheral or localised oedema, leg cramps, and weight gain have occurred and there have been occasional reports of skin rashes, loss of hair, joint and muscle pain, neutropenia, and eosinophilia. Orthostatic hypotension and tachycardia have been observed. There have been isolated reports of myocardial infarction particularly in patients with ischaemic heart disease or when given with other va-soconstrictive drugs, both of which are contra-indications for methysergide therapy.

Arterial spasm has occurred in some patients, and may present as paraesthesia of the extremities or anginal pain, as with ergotamine; if such symptoms occur methysergide should be withdrawn, although rebound headaches may be experienced if it is withdrawn suddenly. Vascular insufficiency of the lower limbs may represent arterial spasm or fibrotic changes. Treatment should be stopped at the first signs of impaired peripheral circulation. Retroperitoneal fibrosis, with obstruction of abdominal blood vessels and ureters, pleuropulmonary fibrosis, and fibrotic changes in heart valves have occurred in patients on long-term treatment. Methysergide must be withdrawn immediately if fibrosis occurs. Retroperitoneal fibrosis is usually reversible, but other fibrotic changes are less readily reversed.

Fibrosis. Fibrosis has been associated with the long-term use of methysergide maleate. In one early report in 27 patients retroperitoneal fibrosis was attributed to use of methysergide for periods of 9 to 54 months in doses ranging from 2 to 28 mg daily. There was partial or complete regression of fibrosis in 13 of the patients whose treatment was withdrawn. Improvement usually began within a few days, in some cases with the aid of pred-nisone. The other 14 patients were treated by surgery; those few who continued taking methysergide had difficult postoperative courses. Cardiac murmurs occurred in 7 patients, and regressed wholly or partially in 3 after therapy was stopped. Fibrotic changes affecting the aorta, heart valves, and pulmonary tissues occurred in a few of the patients. Others have reported the development of endocardial fibrosis indicated by cardiac murmurs in 48 patients receiving methysergide. The murmurs gradually regressed in 27 when methysergide was stopped. Retroperitoneal fibrosis was present in 9 patients and pleuropulmonary fibrosis in 2. A patient with fibrosis of the iliac vein has been described.

Methysergide maleate should be withdrawn immediately if fibrosis develops. Corticosteroids have been used to treat fibrosis, although surgery may be required.

In addition, methysergide maleate is contra-indicated in valvular heart disease, pulmonary and collagen diseases, diseases of the urinary tract, phlebitis and cellulitis of the lower extremities, and debilitated states. It should be used with caution in patients with peptic ulcer disease because it may increase gastric acidity. Patients should be closely supervised. Methysergide should not be given continuously for more than 6 months and should normally be withdrawn gradually (see Uses and Administration, below). However, it should be withdrawn immediately if symptoms of fibrosis or arterial spasm develop.

Porphyria. Methysergide is considered to be unsafe in patients with porphyria because it has been shown to be porphyrinogenic in animals or in-vitro systems.

Interactions involving those ergot alkaloids used primarily in the management of migraine are discussed under ergotamine. References specific to methysergide may be found there under the headings Antimigraine Drugs and Beta Blockers.

Methysergide maleate is rapidly absorbed from the gastrointestinal tract with maximum plasma concentrations being obtained within about one hour of ingestion. It is 66% bound to plasma proteins. Methysergide undergoes extensive first-pass hepatic metabolism to methylergometrine. About 50% of an oral dose is excreted in the urine as unchanged drug and metabolites. The elimination of methysergide is biphasic; half-lives of about 2.7 hours and 10 hours have been reported for the 2 phases respectively.

Methysergide maleate is a semisynthetic ergot alkaloid. It is a potent serotonin antagonist and, compared with ergotamine, has only weak vasoconstrictor and oxytocic effects. It may be used to prevent severe recurrent migraine and headache attacks during cluster periods, although its use has declined because of adverse effects. It is ineffective in the treatment of acute attacks.

Methysergide is given orally as the maleate but doses are often expressed in terms of the base; 1.33 mg of methysergide maleate is equivalent to about 1 mg of methysergide. A usual dosage is 2 to 6 mg daily given in divided doses with meals. It is suggested that treatment should be started with 1 mg at bedtime and doses increased gradually over about 2 weeks; the minimum effective dose should be used. In some other countries doses are expressed in terms of the maleate, a usual dose of which is 4 to 8 mg daily. Careful and regular observation of the patient is essential because of the high incidence of adverse effects and it is recommended that treatment should only be carried out under hospital supervision. If treatment still proves to be ineffective after 3 weeks, further use is unlikely to be of benefit. Treatment should not be continued for more than 6 months, after which it should be gradually withdrawn over 2 or 3 weeks and then stopped for at least a month for reassessment. Some have considered that treatment courses should not exceed 3 months without a break. Methysergide maleate has also been used to control diarrhoea associated with carcinoid syndrome in high doses equivalent to 12 to 20 mg of methysergide daily. As a serotonin antagonist, methysergide might be expected to help reverse the serotonin syndrome.

The United States Pharmacopeia 31, 2008, and Supplements 1 and 2: Methysergide Maleate Tablets