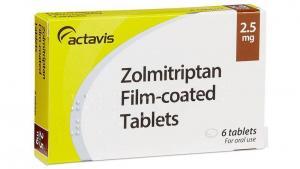 Zolmitriptan should also be avoided in patients with Wolff-Parkinson-White syndrome or arrhythmias associated with accessory cardiac conduction pathways. It should be given with caution in patients with moderate to severe hepatic impairment.

Ischaemia. A spinal cord lesion related to the use of zolmitriptan has been reported in a 50-year-old woman; clinical features suggested that the lesion was an ischaemic infarct.

Beta blockers. Propranolol increased plasma-zolmitriptan concentrations in a study in 12 healthy subjects, but the changes were not thought to be clinically important enough to warrant dosage adjustment during concomitant use. 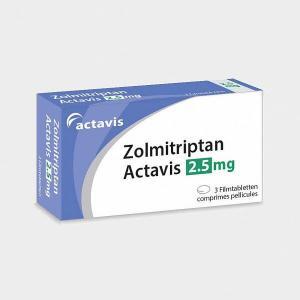 The absolute bioavailability of zolmitriptan after oral and intranasal doses is about 40%, and peak plasma concentrations are achieved in about 1.5 to 3 hours after oral doses, depending on the formulation, and in about 3 hours with the intranasal spray. Plasma protein binding is about 25%. Zolmitriptan undergoes hepatic metabolism, principally to the indole acetic acid, and also the N-oxide and N-desmethyl analogues. The N-desmethyl metabolite (183C91) was more active than the parent compound in animal studies, and would be expected to contribute to the therapeutic effect of zolmitriptan. The primary metabolism of zolmitriptan is mediated mainly by the cytochrome P450 isoenzyme CYP1A2 while monoamine oxidase type A is responsible for further metabolism of the N-desmethyl metabolite. Over 60% of a dose is excreted in the urine, mainly as the indole acetic acid, and about 30% appears in the faeces, mainly as unchanged drug. The elimination half-life is 2.5 to 3 hours, and is prolonged in patients with liver disease. Distribution into milk has been found in studies in rats.

Zolmitriptan is a selective serotonin (5-HT1) agonist with actions and uses similar to those of sumatriptan. It is used for the acute treatment of migraine attacks. Zolmitriptan should not be used for prophylaxis.

A maximum oral dose of 5 mg in 24 hours is recommended by licensed product information in the UK in patients with moderate to severe impairment. A dose of less than 2.5 mg is recommended in the USA.

Migraine and cluster headache. For comparison of the relative benefits of different triptans in migraine, see under Sumatriptan.