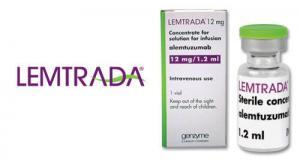 Note. The name FluCam has been used for a regimen of alemtuzumab with fiudarabine. Distinguish from Flucam, which is ampiroxicam.

Alemtuzumab commonly causes bone marrow depression, which may be severe and prolonged; fatalities have occurred. Auto-immune anaemia and autoimmune thrombocytopenia and haemolytic anaemia have been reported less commonly; however, fatalities have been reported. Single doses greater than 30 mg, or cumulative weekly doses greater than 90 mg should not be used, because of the increased incidence of pancytopenia. Complete blood and platelet counts should be measured weekly during alemtuzumab therapy, and more frequently if anaemia, neutropenia, or thrombocytopenia occur. Treatment should be interrupted if severe myelosuppression or evidence of haematological toxicity are seen and stopped permanently if autoimmune anaemia or auto-immune thrombocytopenia develops. Lymphopenia may be profound with alemtuzumab therapy, and opportunistic infections are common, and occasionally life-threatening. Antimicrobial prophylaxis is recommended from the start of therapy until after completion; if serious infection occurs, treatment should be interrupted. Recovery of lymphocyte counts may take 6 months or longer after stopping treatment.

Alemtuzumab commonly causes an acute cytokine release syndrome. The reaction usually includes rigors, fever, nausea and vomiting, hypotension, rash, urticaria, pruritus, shortness of breath, headache, and diarrhoea. Rarer, more serious reactions may include bronchospasm, syncope, pulmonary infiltrates, acute respiratory distress syndrome, respiratory arrest, myocardial infarction, and cardiac arrest. Cardiac adverse effects have been fatal in some instances. These infusion-related reactions are most common at the start of therapy: the dose must be increased gradually when beginning treatment, or if it is interrupted for 7 days or more. Pre-medication with an oral or intravenous cor-ticosteroid, oral antihistamine, and analgesic should also be used, particularly before the first dose, and with dose increases. If acute infusion reactions persist, the infusion time may be extended to 8 hours from the time ofreconstitution.

Other adverse effects include fatigue, anorexia, asthenia, malaise, arthralgia, myalgia, bone pain, back pain, chest pain, hypertension, cyanosis, and bradycardia or tachycardia. Localised oedema, stomatitis, mucositis, and abdominal pain have been reported, as have dizziness, paraesthesia, tremor, and taste loss. Confusion, insomnia or somnolence, depression, or anxiety may occur. Electrolyte disturbances include hyponatraemia and hypocalcaemia. Coughing, haemoptysis, sinusitis, bronchitis, and pharyngitis have been reported. Alemtuzumab is contra-indicated for patients with active systemic infection, or underlying immunodeficiency

Infection. Reactivation of hepatitis B and CMV has been reported with the use of alemtuzumab. Patients who have been pre-treated with purine analogues or those with advanced disease and not responding to alemtuzumab therapy appear to be at highest risk for infectious complications. Recommendations for screening and prophylaxis and guidelines for management have been published. Six infection-related deaths have been reported after previously untreated patients with B-cell chronic lymphocytic leukaemia were treated with fiudarabine and rituximab, followed by alemtuzumab. These deaths may have resulted from a prolonged period of immunosuppression due to the sequencing of these drugs without sufficient recovery time. In the EU, alemtuzumab is licensed for use in patients for whom fiudarabine combination chemotherapy is not appropriate.

There are no formal interaction studies with alemtuzumab; however, it is recommended that it should not be given within 3 weeks of other chemotherapy drugs, and that patients should not receive live viral vaccines for at least 12 months after receiving alemtuzumab.

In patients with B-cell chronic lymphocytic leukaemia, distribution of alemtuzumab is mainly to the extracellular fluid and plasma. Over 12 weeks, clearance has been found to decrease with repeated dosing, with consequent accumulation in plasma, and the rate of elimination to approach zero-order kinetics. The half-life is reported to be 8 hours after a first dose of 30 mg, and 6 days after the last 30 mg dose. Steady-state concentrations are reached after about 6 weeks of therapy.

Alemtuzumab is a humanised derivative of campath-1G, a rat monoclonal antibody to the CD52 antigen found on lymphocytes. Alemtuzumab is used in the treatment of B-cell chronic lymphocytic leukaemia. The dose of alemtuzumab must be increased gradually to avoid infusion-related reactions (see above). Alemtuzumab should be diluted in 100 niL sodium chloride 0.9% or glucose 5%. The initial dose is 3 mg daily, given as an intravenous infusion over 2 hours (it may be increased up to 8 hours in some patients, see above). This dose should be repeated daily until it is tolerated; the dose should then be increased to 10 mg daily. When this dose is tolerated, the maintenance dose of 30 mg can be started; this dose escalation usually takes 3 to 7 days. A maximum maintenance dose of 30 mg given three times weekly on alternate days can then be used for up to 12 weeks. The dose should be modified according to haematological toxicity.

Administration. Subcutaneous use of alemtuzumab has been investigated as a means of reducing adverse infusion reactions associated with intravenous dosage. Studies have found it to be safe and effective. Similar blood concentrations are achieved to those after intravenous use, although accumulation in the blood took longer to achieve with subcutaneous use, and higher cumulative doses were required. Prolonged treatment with subcutaneous low-dose alemtuzumab (10 mg three times weekly for 18 weeks) has been reported to be as effective as intravenous infusion in patients with chronic lymphocytic leukaemia and a poor prognosis.

The symbol ¤ denotes a preparation which is discontinued or no longer actively marketed.