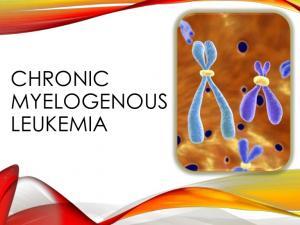 Following the entrance of the protein tyrosine kinase inhibitor imatinib (Novartis’ s Gleevec/Glivec) into the chronic myelogenous leukemia marketplace in 2001, the agent dramatically transformed the market, and protein tyrosine kinase inhibitors have dominated research and development in the field ever since. Since 2001, imatinib has entirely replaced interferon-a as the agent against which all potential newcomers are measured. Several agents that were trialed against interferon-a prior to the launch of imatinib have had to be reevaluated for synergism with imatinib or for activity in imatinib-refractory patients — indeed, the high and durable response rates imatinib has achieved have caused several companies to discontinue development of competing therapies. However, imatinib’s shortcomings define the nature and extent of unmet needs in the treatment of chronic myelogenous leukemia.

Other drugs in development for the treatment of chronic myelogenous leukemia include rapamycin analogues, histone deacetylase inhibitors (HDACIs) such as suberoylanilide hydrox-amic acid (SAHA), and anti-bcl-2 antisense oligonucleotides.

A preclinical study has reported that the mammalian target of rapamycin (mTOR) inhibitor, rapamycin, synergized with imatinib against BCR-ABL-positive myeloid and lymphoid cells and increased survival in a murine chronic myelogenous leukemia model. In addition, rapamycin + imatinib combinations inhibited imatinib-resistant mutants of BCR-ABL.

The possibility of combining HDACIs with the HSP-90 antagonist 17-AAG was raised in a recent study as a novel strategy against BCR-ABL-positive leukemias, including those resistant to imatinib.

Companies developing agents for chronic myelogenous leukemia may apply for orphan drug status for their molecule in any of the major markets. Orphan drug status was introduced in 1983 to give pharmaceutical companies a financial incentive to develop products to treat rare diseases. In the United States, a condition is considered rare if it affects fewer than 200,000 people in the country. Manufacturers of compounds with orphan drug status receive several benefits: seven years of market exclusivity if the product is subsequently approved, a federal tax credit for clinical research costs, exemption from the FDA registration fee, and protocol assistance. They may also be eligible for additional grants. The introduction of orphan drug status has dramatically increased the number of drugs being developed to treat rare conditions.

aAgent may be in later stages of development for other indications.

The long median survival of patients with chronic-phase chronic myelogenous leukemia means that initial response rates to investigational drugs are frequently used as surrogate measures of efficacy in clinical trials. These initial response rates have historically been the ability to achieve a complete hematologic response (a white blood cell count between 4,000 and 11,000 per mm3) or complete cytogenetic response (the absence of cells expressing the Philadelphia chromosome). However, because of the success of imatinib at achieving these endpoints, measuring molecular response (a reduction in quantities of BCR-ABL transcripts, as detected by polymerase chain reaction [PCR], is becoming increasingly important for evaluating novel therapies. A complete molecular response occurs when there is no evidence of BCR-ABL transcripts, indicating disease eradication.