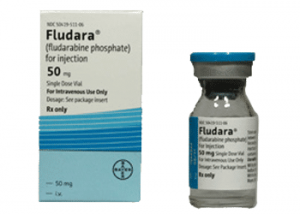 Note. The name FluCam has been used for a regimen of fludarabine with alemtuzumab. Distinguish from Flucam, which is ampiroxicam.

Pharmacopoeias. In Europe and US.

European Pharmacopoeia, 6th ed., 2008 and Supplements 6.1 and 6.2 (Fludarabine Phosphate). A white or almost white, hygroscopic, crystalline powder. Slightly soluble in water; very slightly soluble in dehydrated alcohol; freely soluble in dimethylformamide. Store in airtight containers at a temperature of 2° to 8°. Protect from light. 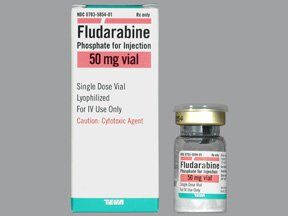 Bone-marrow suppression from fludarabine is dose-limiting, manifesting as neutropenia, thrombocytopenia, and anaemia; the nadir of the white cell and platelet counts usually occurs after about 13 to 16 days. Myelosuppression can be severe and cumulative; prolonged lymphopenia with concomitant risk of opportunistic infections may occur. Bone marrow hypoplasia or aplasia resulting in pancytopenia may sometimes be fatal.

Exacerbation of existing skin cancer lesions as well as new onset of skin cancer has been reported in some patients. Transfusion-associated graft-versus-host disease has been seen after transfusion of non-irradiated blood in patients treated with fludarabine, and fatalities have occurred; patients should only receive irradiated blood.

Dosage should be reduced in renal impairment (see below). It should also be avoided in patients with decom-pensated haemolytic anaemia.

Carcinogenicity. A study in patients with chronic lymphocytic leukaemia who were treated with fludarabine found that there was no significantly increased risk of secondary malignancy following therapy, despite the immunosuppressive properties of this drug. A review of this and other studies concluded that no significant increase in the risk of secondary malignancy had been shown, but also that long-term follow-up of patients treated with fludarabine was needed.

Effects on the lungs. Pulmonary toxicity manifest as dyspnoea, fever, hypoxaemia, and radiographic evidence of interstitial and alveolar infiltrates was diagnosed in 9 patients of a cohort of 105 treated with fludarabine. Lung biopsies were performed in 6 patients and showed diffuse chronic interstitial inflammation and fibrosis. Patients with chronic lymphocytic leukaemia appeared to be at greater risk of developing this complication than those with non-Hodgkin’s lymphoma.

Effects on the nervous system. High doses (of the order of 100mg/m daily intravenously) of fludarabine are associated with severe, life-threatening neurotoxicity. However, a few cases of progressive multifocal leukoencephalopathy have also been reported in patients given fludarabine in usual doses. The prolonged immunosuppression caused by fludarabine might increase the risk of developing this fatal demyelinating disease, which is caused by opportunistic JC virus infection. Ocular toxicity, including irreversible loss of vision, has also been reported occasionally, including with low-dose regimens.

Infection. A review of patients treated with fludarabine-containing regimens showed that therapy was associated with serious infections including listeriosis, pneumocystis pneumonia, mycobacterial infections, and opportunistic fungal and viral infections. The risk was exacerbated by previous or current corticosteroid therapy. Prophylactic therapy with co-trimoxazole, triazole antifungals, aciclovir, and colony-stimulating factors was recommended in at-risk patients. A high incidence of herpesvirus infections was also found in another review of patients treated with fludarabine. Combination therapy using chlorambucil and fludarabine resulted in more infections than when either was used alone, but single-agent fludarabine was associated with more major infections and herpesvirus infections than chlorambucil alone. The frequency of serious infection has also been reported to be increased in patients after their conditions became refractory to fludarabine and they were being treated with conventional chemotherapy.

For reports of progressive multifocal leukoencephalopathy caused by opportunistic JC virus infection in patients receiving fludarabine, see Effects on the Nervous System, above.

Aminoglycosides. Severe ototoxicity occurred when a short course of gentamicin was given to a patient who had recently completed a course of fludarabine.

Corticoste raids. For a suggestion that use of fludarabine with corticosteroids may increase the risk of infection, see Infection, above.

Intravenous fludarabine phosphate is rapidly dephosphorylated to fludarabine which is taken up by lymphocytes and rephosphorylated to the active triphos-phate nucleotide. Peak intracellular concentrations of fludarabine triphosphate are seen about 4 hours after a dose. Fludarabine has a bioavailability of about 50 to 65% after oral doses of the phosphate. Clearance of fludarabine from the plasma is triphasic with a terminal half-life of about 20 hours. Elimination is mostly via renal excretion: 60% of a dose is excreted in the urine. The pharmacokinetics of fludarabine exhibit considerable interindividual variation.

Fludarabine is a fluorinated nucleotide analogue of the antiviral vidarabine; it acts as a purine antagonist antimetabolite. It is used for its antineoplastic properties in the treatment of chronic lymphocytic leukaemia. Fludarabine phosphate is given by bolus injection or by intravenous infusion over 30 minutes in a usual dose of 25 mg/m daily for 5 consecutive days. Alternatively it may be given orally in a dose of 40 mg/m daily for 5 consecutive days. Courses may be repeated every 28 days, usually for up to 6 cycles. Haematological function should be monitored regularly; the dosage may need to be reduced, or further courses delayed, if blood counts indicate severe or persistent myelosuppression (see also Bone-marrow Depression). Doses should be reduced in renal impairment (see below).

Malignant neoplasms. Fludarabine is the preferred second-line therapy for chronic lymphocytic leukaemia once initial alkylating agent therapy fails, and may also be used for initial therapy. It has also been tried in other malignancies. Listed below are some references to the use of fludarabine phosphate for the treatment of chronic lymphocytic leukaemia, and its potential activity against a variety of other malignancies, including indolent low-grade non-Hodgkin’s lymphoma, mycosis fungoides, heavy chain disease, prolym-phocytic leukaemia, hairy cell leukaemia, and Walden-strom’s macroglobulinaemia.

United States of America (US and USA): Fludara;