Home > Asthma > The Asthma in the Elderly: Drug Treatment

Improved knowledge of how asthma operates as an inflammatory disease has led to a major change in the way medications are used to relieve bronchospasm and remove mucous. Doctors are moving away from an emphasis on relatively short-acting agents to using long-term strategies with inhaled corticosteroids to prevent and eradicate airway inflammation. 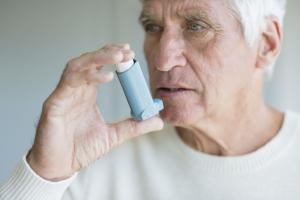 Elderly asthmatic patients are prone to the same factors that worsen asthma in younger sufferers: viral respiratory infections, paint and household cleaning product fumes, cold air, exposure to smoke, etc. The pharmacological management of asthma does not differ very much in the elderly from what is used at any age, except in three ways: the elderly are likely to experience significant side effects from medications; they are more likely to develop drug interactions with other medications they may be required to take; and they are more likely to rely on medications over many years.

Because of these factors, another problem arises: elderly patients are less likely to take their medications regularly — or at all — either because of the side effects, or because they simply don’t want to admit to being ill. Furthermore, while some elderly asthmatic patients have only mild and occasional symptoms of wheezing and cough, most have almost continual symptoms. Doctors have been investigating ways to tailor medications to these individual needs.

The two main types of drugs used to treat asthma are bronchodilators, which are used as short-term treatment (a matter of minutes or hours) for symptoms such as wheezing, and anti-inflammatory agents which stop inflammation and are used primarily for prevention. Treatment with either of these classes of drugs has pros and cons that doctors need to weigh when prescribing medications for their elderly patients.

Taking a beta2-adrenergic agent is the most effective way to open up obstructed airways in a hurry. It works by activating beta2 receptors in the lungs (found on the airway smooth muscle cells or inflammatory cells) resulting in the relaxation of bronchial smooth muscle. Inhaled types are commonly prescribed, including albuterol, bitolterol, salbutamol and terbutaline, to name a few. Long-acting, effective oral treatment, such as bambuterol, is available only in certain countries. So far, there seems to be no particular advantage in taking the oral forms; since the inhaled forms have fewer side effects, they are preferred.

Concerns have been raised recently about the possible effects of long-term use of beta2-adrenergic (also called beta-agonist) drugs, and about the association of their excessive use with high asthma death rates. A Saskatchewan study discovered this latter link, but the key word here is “excessive” — that is, exceeding the recommended dosage is dangerous, possibly because the beta2 receptors become desensitized with excessive use. The additional effect of aging on beta2 receptor responsiveness may also be a factor in long-term beta-agonist use. Some, but not all, investigators have found decreased responsiveness to these agents with advanced age.

Common side effects of these drugs include racing heart (tachycardia), a drop in serum potassium (which can increase cardiac problems) and tremor, all of which cause special problems for elderly patients. In addition, the elderly sometimes have trouble using metered dose inhalers and spacers — such cases make getting the right dose problematic. Instead, for acute asthma attacks, beta2-agonist drugs can be inhaled in wet nebulizer form.

The most prescribed oral methylxanthine is theophylline, which is no longer used as first-line asthma therapy. It has a limited scope of action which, in some cases, makes it useful as add-on therapy, especially if patients are not getting good asthma control despite maximum use of anti-inflammatory agents and inhaled bronchodilators. Side effects at lower blood levels include nausea and upset stomach; higher blood levels can produce life-threatening seizures and cardiac arrhythmias, which occur many times more frequently in the elderly than in younger patients.

As anti-inflammatory drugs, corticosteroids are extremely effective in the prevention and treatment of asthmatic symptoms. In their inhaled form, they can reduce or eliminate the need for brochodilators and oral corticosteroids. Unfortunately, many elderly patients require oral corticosteroids (prednisone is most common in North America) to control symptoms without interrupting their normal levels of activity. Corticosteroids have numerous side effects when taken in their oral form, including insomnia, emotional disturbances, diabetes mellitus and cataracts. For elderly patients, the risk of rib and vertebral fractures rises dramatically, and osteoporosis is a serious problem that requires aggressive, early preventive treatment using calcium supplements and exercise.

Asthma treatment in the elderly is challenging, especially when complications such as those that can occur with oral corticosteroids become severe and life-threatening. But effective treatment is available. Many studies are currently underway to increase our understanding of asthma — all the better to develop successful drug treatment strategies for the elderly.