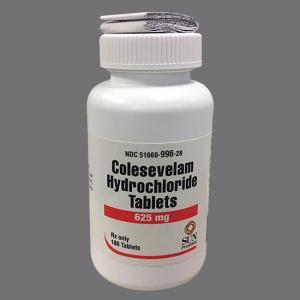 Bile acids are formed from cholesterol in a series of reactions regulated by the enzyme 7-alpha- hydroxylase. During normal digestion, bile acids are secreted into the intestine. A major portion of bile acids are then absorbed from the intestinal tract and returned to the liver via the enterohepatic circulation. Colesevelam is a hydrophilic, water-insoluble polymer that is not hydrolyzed by digestive enzymes and is not absorbed (less than 0.05% absorption) from the GI tract. It binds bile acids in the intestine, impeding their reabsorption and facilitating elimination. As the bile acid pool becomes depleted, the hepatic enzyme cholesterol 7-alpha-hydroxylase is upregulated, increasing the conversion of cholesterol to bile acids. This causes an increased demand for cholesterol in the liver cells, resulting in both increased transcription and activity of the cholesterol biosynthetic enzyme, HMG-CoA reductase, and increased numbers of hepatic low-density lipoprotein (LDL) receptors. These compensatory effects result in increased clearance of LDL-C from the blood, thereby decreasing serum LDL-C levels. Furthermore, studies have shown that the combination of colesevelam and an HMG-CoA reductase inhibitor is effective in further lowering serum total-C and LDL-C levels beyond that achieved by either agent alone.

The effectiveness of colesevelam in lowering LDL-C has been demonstrated in a number of controlled clinical trials involving approximately 1,400 patients who were treated for 4–50 weeks. Colesevelam taken alone was found to be effective for patients with mild-to-moderate hypercholesterolemia, producing a maximum therapeutic response within two weeks; this effect was maintained during long-term therapy. In a study in patients with LDL-C between 130 and 220 mg/dL (mean 158 mg/dL), colesevelam was given for 24 weeks in divided doses with the morning and evening meals. In this study, the mean LDL-C reductions were 15% with a 3.8 g dose of colesevelam and 18% with a 4.5 g dose. The mean total-C reductions were 7% and 10%, respectively, and the mean Apo B reductions were 12% in both treatment groups. Colesevelam at both doses also resulted in a 3% increase in HDL-C. There were also small increases in triglycerides (TG) at both colesevelam HCl doses but these were not statistically different from placebo. 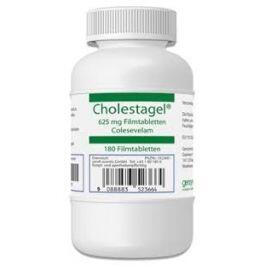 In a study of nearly 100 patients with LDL-C between 145 and 250 mg/dL (mean 169 mg/dL), 3.8 g of colesevelam was given for six weeks as a single dose with breakfast, a single dose with dinner, or as divided doses with breakfast and dinner. The mean LDL-C reductions were 18%, 15%, and 18% for the three dosing regimens, respectively. The reductions with these three regimens were not statistically different from one another. Coadministration of colesevelam and an HMG-CoARI (atorvastatin, lovastatin, or simvastatin) produced an additive reduction of LDL-C in several clinical studies. Colesevelam doses of 2.3 g to 3.8 g resulted in additional 8% to 16% reductions in LDL-C above that seen with the HMG-CoARI alone. It should be noted that the specific effects of colesevelam, either alone or with an HMG-CoA reductase inhibitor, on cardiovascular morbidity and mortality have not been determined at this time.

Based on these studies, colesevelam, administered alone or in combination with an HMG-CoA reductase inhibitor, is indicated as adjunctive therapy to diet and exercise for the reduction of elevated LDL-C in patients with primary hypercholesterolemia who are at significant increased risk for atherosclerotic vascular disease. Prior to initiating colesevelam therapy, it is necessary to first exclude secondary causes of hypercholesterolemia, such as poorly controlled diabetes mellitus, hypothyroidism, nephrotic syndrome, dysproteinemias, obstructive liver disease or other drug therapy. Also, a lipid profile should be obtained to assess total-C, HDL-C, and TG and periodic serum cholesterol levels, determined as outlined in the National Cholesterol Education Program (NCEP) guidelines to confirm a favorable initial and long-term response. Colesevelam should be used with caution in patients with gastrointestinal disorders (e.g., dysphagia, swallowing disorders, severe gastrointestinal motility disorders, or major gastrointestinal tract surgery) since the safety and efficacy of this drug has not been established in such patients.