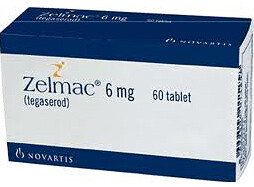 Irritable bowel syndrome (IBS) is a very common disorder characterized by frequent diarrhea or alternating bouts of diarrhea and constipation. It is more than twice as common in women as in men. In February 2000, the FDA approved the drug Lotronex (alosetron) for the treatment of women whose primary irritable bowel syndrome symptom is diarrhea.

Zelmac (tegaserod) improves bowel function by acting on specific receptors in the colon called serotonin receptors. Clinical trials assessing the effectiveness of Zelmac showed that patients who took this medication experienced improved bowel function as early as the first day and significant improvement of symptoms in the first week – relief that was sustained throughout the entire 12-week study period. Zelmac increased the number of bowel movements per day and decreased the number of days with no bowel movements. The most common side effect associated with Zelmac (tegaserod) was diarrhea, which occurred in 12% of patients. However, only 1.6% of patients stopped taking the drug for this reason.

“While all irritable bowel syndrome symptom sufferers experience pain, it is important to understand that the majority of patients also have constipation as a primary symptom,” said Dr. Marvin M. Schuster, Professor of Medicine at Johns Hopkins University of Medicine. “The prevalence of constipation makes the potential availability of Zelmac (tegaserod) attractive for treating the multiple symptoms of irritable bowel syndrome symptom patients.”