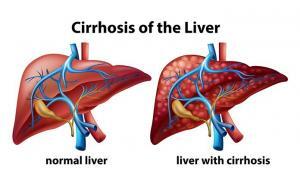 Cirrhosis is a disease state that is the consequence of a wide variety of chronic, progressive liver diseases. These result in diffuse destruction of hepatic parenchyma and its replacement with collagenous scar tissue and regenerating nodules with disruption of the normal hepatic lobular and vascular architecture. Regardless of etiology, the triad of parenchymal necrosis, regeneration, and scarring is present in all cirrhotic patients.

Morphologic classification seldom permits the determination of the specific etiology. However, micronodular cirrhosis is most commonly seen as the consequence of alcoholic liver disease, and macronodular and mixed cirrhosis are the result of most other inflammatory or infiltrative diseases of the liver. 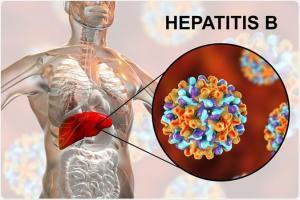 A specific diagnosis generally requires a combination of history, physical findings, laboratory tests, and the identification of characteristic histologic features.

Most symptoms found in patients with cirrhosis are nonspecific. Fatigue, malaise, and loss of vigor are common. There may be other symptoms caused by a complication of the disease leading to cirrhosis or of cirrhosis itself. These are discussed in the corresponding chapters or sections.

Physical examination. No physical abnormality establishes the diagnosis of cirrhosis.

The liver in most patients with cirrhosis is enlarged and palpable below the costal margin. The left lobe often extends to the left upper quadrant below the xiphoid process. A small, hard, shrunken liver is a sign of very advanced cirrhosis. The liver edge in most patients with cirrhosis feels firm. Occasionally, regenerating nodules may be palpable in macronodular cirrhosis. Micronodules are not palpable.

Pathogenesis. The normal adult liver is perfused by about 1500 mL of blood/minute. Two thirds of this blood flow and one half of the oxygen supply are provided by the portal vein, the rest by the hepatic artery. Normally, the pressure in the portal vein is low, because the vascular resistance in the hepatic sinusoids is also low. A sustained elevation of portal venous pressure above the normal of 6 to 10 mm Hg is called portal hypertension. There are many causes of portal hypertension, but cirrhosis is the most common cause in the United States. Portal venous pressure is primarily a function of volume of and resistance to the blood flow. Factors contributing to distortion of the portal venous bed resulting in increased resistance to blood flow in cirrhosis include the following:

Deposition of collagen in the space of Disse with consequent narrowing of the sinusoids.

Distortion of sinusoids and the hepatic venous system by regenerating nodules.

The distortion of the hepatic parenchyma results in not only the development of portal hypertension but also intrahepatic intravascular shunts between portal venules through sinusoids to hepatic venules. Up to one third of the hepatic blood flow may bypass the functioning liver tissue because of these shunts.

The current classification (Table CLASSIFICATION OF PORTAL HYPERTENSION(A PARTIAL LISTING) of portal hypertension is based on the major location of increased vascular resistance. Anatomically, the obstruction to portal blood flow can occur at three levels:

Major sites of collateral flow include the following:

The left gastric vein and short gastric veins join with intercostal, diaphragm esophageal, and azygos veins of the caval system. This results in the formation of esophageal and gastric varices.

Remnants of the umbilical circulation of the fetus present in the falciform ligament may form a large paraumbilical vein (caput medusae.)

Varices. The thin-walled varices in the lower esophagus and upper stomach may bleed extensively and constitute the major complication of portal hypertension. Variceal bleeding occurs without an obvious precipitating cause and presents usually as a painless massive hematemesis or melena.

Portal hypertension and obstruction to portal flow may cause enlargement and engorgement of the spleen. The resulting hypersplenism causes sequestration and destruction of all or some of the blood cells, leading to decreased red cell survival, neutropenia, and thrombocytopenia. These hematologic abnormalities are usually not severe and do not require specific therapy.

In patients with thrombocytopenia who require a surgical procedure, a normal bleeding time is a good index of adequacy of hemostasis. If it is abnormal, cryoprecipitate and platelet transfusions should be administered prior to surgery. Splenectomy is not routinely recommended for patients with hypersplenism. The effect of surgical portal decompression on hypersplenism is unpredictable.