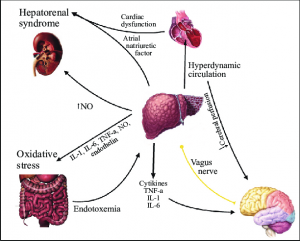 The shunting of blood from the gut directly to the systemic circulation, bypassing the liver, due to portal hypertension and the poor function of the diseased liver, allows the accumulation of various «toxins» leading to deranged cerebral function. The various toxins and states implicated in the pathogenesis of hepatic encephalopathy include ammonia, Оі-aminobutyric acid (GABA), mercaptan, short-chain fatty acids, false neurotransmitters, an imbalance of excitatory and inhibitory neurotransmitters, and the reversed ratio of serum aromatic amino acids to branched-chain amino acids.

Several pathogenetic mechanisms involving neurotransmitter systems have been proposed to explain hepatic encephalopathy, including the following:

Moreover, in these patients, other metabolic disturbances such as azotemia, electrolyte abnormalities, acid-base disorders such as hypokalemic alkalosis, and infections may also contribute to the cerebral dysfunction. In addition, in patients with cirrhosis and portosystemic encephalopathy, the central nervous system appears to be very sensitive to the sedative effects of drugs. Decreased hepatic drug metabolism with subsequent accumulation of the drug, decreased binding of the drug to decreased plasma proteins (making more free drug available to penetrate the altered, «more porous» blood-brain barrier), and enhanced cerebral receptor sensitivity to sedative drugs such as benzodiazepines and barbiturates probably combine to increase susceptibility of the patient to development of encephalopathy and coma.

Clinical presentation. The diagnosis of hepatic encephalopathy is clinical and depends on documentation of the presence of mental status changes, fetor hepaticus, and asterixis in a patient with parenchymal liver disease. Fetor hepaticus refers to the feculent-fruity odor of the breath in these patients. Asterixis is a flapping motion of the hands caused by intermittent loss of extensor tone. It is best elicited by asking the patient to outstretch his or her arms, with hands extended at the wrist and fingers separated. The flap is maximal with sustained posture. The motor disturbance can also be detected in tightly closed eyelids, pursed lips, and protruded tongue. Asterixis is not specific for hepatic encephalopathy. It can also occur in patients with uremia, severe pulmonary disease, and sedative overdose.

Stages. Hepatic encephalopathy can be subclinical or overt; the overt form can be classified roughly into four stages of increasing severity as follows:

Stage intravenous. Patients are in deep coma, usually with no response to stimuli. Muscle tone may be totally absent, limbs flaccid, and reflexes depressed.

The neurologic signs in hepatic encephalopathy are caused by metabolic abnormalities and in most instances are transient, changing, and potentially reversible.

Laboratory abnormalities found in patients with hepatic encephalopathy may include abnormal liver chemistry tests, which reflect the state of the underlying parenchymal liver disease. Respiratory alkalosis with central hyperventilation is usually present. In 90% of the patients with hepatic encephalopathy, the arterial ammonia concentration is increased. The arterial ammonia level does not correlate linearly with the depth of the coma. However, serial measurements are helpful in following the course of the hepatic encephalopathy in individual patients. Since the brain does not have a urea cycle, the removal of ammonia depends on glutamine synthesis. Thus the spinal fluid glutamine is a more sensitive test than arterial ammonia and correlates closely with the depth of the coma.

In patients with portosystemic encephalopathy, blood levels of free fatty acids are elevated. There is also an increase in the aromatic amino acids and methionine in the blood, whereas branched-chain amino acid levels are decreased.

The treatment of portosystemic encephalopathy includes the following:

Reduction of the «influx» of the putative cerebral «toxins.» Most of the putative toxins implicated in portosystemic encephalopathy such as ammonia, GABA, and mercaptans are protein breakdown products from the gut. Due to portal hypertension and portal-systemic shunting, these toxins are more available to the «sensitive» central nervous system in these patients. The reduction of the formation and influx of these toxins into the central nervous system is accomplished by the following:

Supportive care is crucial in these patients. Catabolism of patients’ own endogenous protein should be prevented by providing adequate calories (1,800-2,400 per day) in the form of glucose or carbohydrates. Vitamins and minerals such as magnesium, calcium, phosphorus, and zinc may be deficient and should be replenished. Electrolytes, acid-base imbalances, and prerenal azotemia should be corrected. Gastrointestinal bleeding and infections should be meticulously searched for and treated.

Restriction of dietary protein. The degree of restriction of dietary protein depends on the severity of the mental status changes. Dairy and vegetable proteins are much better tolerated than animal protein. In most patients who can eat, the dietary protein is initially restricted to 40 g per day. Since these patients require protein for hepatic regeneration and protein synthesis (anabolism), complete withdrawal of protein should be brief. As the mental status improves, protein should be reintroduced, preferably in the form of vegetable protein, and advanced to 60 to 110 g as tolerated. Amino acid mixtures, rich in branched-chain amino acids and low in aromatic amino acids and methionine, such as Hepatamine or Hepatic-Aid may be used as protein source or supplement.

Intestinal cleansing, especially if there is gastrointestinal bleeding. Bowel cleansing is initially accomplished by enemas or intestinal lavage solutions such as GoLYTELY or Colyte. However, these patients require prolonged bowel cleansing to eliminate the contents as well as the organisms that break down proteins and «convert» them to the putative toxins. This is accomplished by the use of antibiotics or nonabsorbable sugars.

Neomycin is a nonabsorbable aminoglycoside given orally in doses of 2 to 6 g per day or as a 1% enema if the patient has ileus. Its effect is thought to be by the inactivation of gut bacteria. About 1% to 3% of the drug is absorbed and excreted by the kidneys. Prolonged use of the drug may lead to renal failure as well as eighth cranial nerve damage.

Vancomycin has been shown to be effective in the management of resistant hepatic encephalopathy, but its high cost is prohibitive.

Metronidazole has become the oral antibiotic of choice for acute management of hepatic encephalopathy when lactulose alone does not achieve adequate results. It must be used with caution in this setting because the drug is cleared by the liver and thus is likely to accumulate in patients with chronic liver disease. The recommended dosage is 250 mg by mouth three or four times daily. Use of metronidazole beyond 7 to 10 days is not advisable.

Lactulose is a nonabsorbable disaccharide (galactosidofructose). It is given orally in dosages of 60 to 120 mg of syrup per day. The goal is initially to achieve diarrhea, then to produce two to three soft bowel movements per day. The mechanism of action of lactulose is multifactorial:

It causes an osmotic diarrhea, providing for a rapid evacuation of nitrogenous toxins from the bowel.

It is broken down in the colon by gut bacteria to short-chain fatty acids, which lower the pH of stool. The low pH promotes ammonia (NH3) to ammonium (NH4+) as well as the -NH2 group of other amines, thus making them less lipid soluble and less apt to cross cell membranes of enterocytes to be absorbed into the circulation. Also, the low pH promotes the growth of low-ammonia producing gut bacteria.

It serves as a substrate for bacteria in utilizing ammonia.

Lactisol is similar to lactulose but has a less sweet taste (hence is less likely to cause aversion and noncompliance). It is as effective as lactulose but is not yet available in the United States.

Lactulose and neomycin or metronidazole. Since lactulose has no toxicity, it is usually preferred over neomycin or metronidazole. In some patients, the two types of drugs may be used concomitantly for further therapeutic benefit. As long as the stool pH remains less than 5, the antibiotic is not interfering with the action of lactulose. Thus the stool pH should be checked periodically to ensure that the addition of neomycin does not prevent bacterial action required to reduce lactulose to the active organic acids.

Branched-chain amino acid (BCAA)-enriched formulas. No consensus has been reached on whether the use of intravenous BCAA-enriched formulas leads to more rapid resolution of hepatic encephalopathy. The results of oral BCAA regimens have strongly suggested that this dietary strategy may be useful. Since the cost of these formulations is very high, they may be reserved for patients in whom other measures have failed.

Zinc. Zinc deficiency has been suggested to play a role in hepatic encephalopathy, but few data are available to support this hypothesis. Zinc sulfate and zinc acetate supplementation have been studied in limited trials. Zinc histidine holds promise as a superior oral preparation to use in future trials.

Benzodiazepine receptor antagonists such as flumazenil (Romazicon) have been used in several trials. Sixty to seventy percent of patients improved after intravenous flumazenil administration. Larger trials are under way at this time.