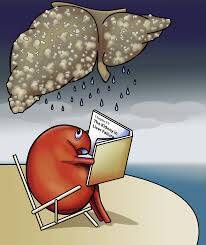 Hepatorenal syndrome is a progressive, functional renal failure that occurs in patients with severe liver disease. Most of these patients have decompensated cirrhosis and tense ascites. Similar syndromes may be seen in metastatic liver disease and fulminant hepatitis from viral, alcoholic, or toxic causes.

The kidneys are anatomically and histologically normal and capable of normal function. The functional integrity of the renal tubules is maintained during the renal failure, as manifested by relatively normal capacity for both sodium resorption and urine concentration. When transplanted into patients without liver disease, these kidneys have been shown to function normally. Conversely, normal function has returned when liver transplantation is carried out successfully.

Pathogenesis. The exact pathogenesis of hepatorenal syndrome is unclear. Most evidence suggests that the primary abnormality in the kidneys is altered blood flow. Hepatorenal syndrome is presently viewed as a perturbation of renal hemodynamics characterized by vasoconstriction of arterioles of the outer renal cortex with shunting of blood to the renal medulla, which results in decreased glomerular filtration rate and urine flow.

The renal hemodynamic alterations in hepatorenal syndrome are thought to be a consequence of decreased «effective» blood volume and increased sympathetic tone, increased intraabdominal and renal venous pressure, and alteration of the normal balance of vasoactive humoral agents such as renin-angiotensin, prostaglandins, thromboxanes, kinins, endotoxins, and renal kallikrein. Newer studies suggest the involvement of endothelin-1 and endothelin-3 in hepatorenal syndrome. Other studies focus on the florid systemic hemodynamic disturbances that accompany this syndrome. These include a hyperdynamic circulation, increased heart rate and cardiac output, and decreased blood pressure and systemic vascular resistance. The identity of the «excess» vasodilator has not been elucidated. Nitric oxide, a vasodilator synthesized from L-arginine and released from vascular endothelium, has been proposed as the mediator for both the hyperdynamic circulation and renal failure. Nitric oxide synthetase can be induced by bacterial lipopolysaccharide endotoxin and leads to peripheral vasodilatation, tachycardia, and a decline in blood pressure.

Diagnosis. Hepatorenal syndrome is characterized by progressive azotemia (serum creatinine > 2.5 mg/dL) oliguria (urine volume < 500 mL per day), a concentrated urine with a urine-plasma osmolality ratio greater than 1.0, urinary sodium concentration less than 10 mEq/liter, and normal urine analysis. The urine may contain small amounts of protein, hyaline, and granular casts. The oliguria may occur spontaneously but usually follows diuretic-therapy diarrhea, paracentesis, gastrointestinal hemorrhage, or sepsis. Hyponatremia, hyperkalemia, hepatic encephalopathy, and coma may precede or accompany the renal functional deterioration. A modest decrease in systemic blood pressure is present, but profound hypotension is not part of the syndrome.

Hepatorenal syndrome must be differentiated from other types of renal failure that can occur in patients with liver disease. These include renal failure from exposure to toxins such as acetaminophen, nonsteroidal antiinflammatory drugs, and carbon tetrachloride; infections; acute tubular necrosis due to hypotension or exposure to aminoglycoside or angiographic dyes; and obstructive uropathy.

The prognosis of hepatorenal syndrome is very poor with an associated mortality greater than 90%.

The management of these patients should include the identification, removal, and treatment of any factors known to precipitate renal failure. Diuretics should be stopped, blood volume lost due to hemorrhage or dehydration should be replaced, serum electrolyte abnormalities (hyponatremia and hypokalemia) corrected, and infections promptly treated. Drugs that inhibit prostaglandin synthesis such as aspirin and nonsteroidal antiinflammatory drugs should not be given to patients with severe liver disease, because these drugs may precipitate renal failure.

All patients should undergo a trial of fluid challenge to increase the «effective» plasma volume, using saline with salt-poor albumin or plasma. Administration of fluid should be closely monitored, preferably with measurement of the central venous pressure to document adequacy of the fluid replacement as well as to prevent congestive heart failure. If diuresis does not occur, the fluid challenge should be stopped.

There is no effective treatment for hepatorenal syndrome. Numerous agents have been tried in a limited number of patients to reverse the renal vasoconstriction, including phentolamine, papaverine, aminophylline, metaraminol, dopamine, phenoxybenzamine hydrochloride, and prostaglandin E. No consistent benefit has been observed with any of these agents. The current treatment of hepatorenal syndrome remains conservative with supportive measures.

It is advisable to use dialysis for patients with potentially reversible liver disease, such as fulminant hepatitis, to allow the liver to heal with the hope that renal function will benefit. Spontaneous reversion of the syndrome, although infrequent, occurs when the liver disease begins to improve.

There are a few reports of recovery from hepatorenal syndrome following portacaval shunt or liver transplantation. However, these major surgical interventions are inapplicable to most patients with this disorder. Reversal of the hepatorenal syndrome after insertion of a peritoneovenous shunt has been reported.