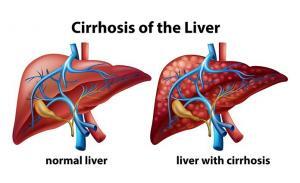 Primary biliary cirrhosis is one of the more common forms of chronic liver disease. The estimated prevalence is four to 14 cases per 100,000 people. It is characterized by chronic inflammation and destruction of small interlobular intrahepatic bile ducts, leading to chronic cholestasis, cirrhosis and portal hypertension. Primary biliary cirrhosis is a multisystem, autoimmune disease that primarily affects the liver. It is also called «dry gland syndrome» because ductular epithelium is damaged in the pancreas, salivary and lacrimal glands, and liver.

Primary biliary cirrhosis primarily (> 90%) is a disease of middle-aged women. The disease has not been seen in children. The age of onset ranges from 20 to 80 years with a mean age of 50. It affects all races and socioeconomic classes and seems to be associated with HLA-DR8 haplotype.

Histopathology of Primary biliary cirrhosis includes gradual destruction of interlobular bile ducts with a lymphocytic and plasma cell rich inflammatory reaction, leading to progressive cholestasis, disappearance of bile ducts, portal fibrosis, and ultimately cirrhosis. The disease can be divided histologically into four stages of increasing severity. However, because the inflammation is patchy throughout the liver and the typical changes of all four stages sometimes can be found in a single liver biopsy specimen, it is often difficult to follow the course of the disease or the efficacy of a treatment program.

In stage I, there is a florid destruction of small bile ducts with mononuclear cell infiltrate. The cells damaging the bile ducts are cytotoxic (OKT8) cells that are surrounded by OKT4 helper/inducer cells. The infiltrate is confined to the portal tracts. Granulomas may be seen.

In stage II, the lesion is more widespread with inflammation spilling into the periportal parenchyma. There is loss of bile ducts with few remaining irregular-appearing ones.

Stage intravenous represents the end stage with frank cirrhosis and absence of bile ducts in portal tracts. Hepatic copper accumulation occurs due to chronic cholestasis, and levels of hepatic copper may be higher than those found in patients with Wilson’s disease.

Clinical presentation. In 50% to 60% of patients, the disease presents insidiously with fatigue and pruritus. Usually, jaundice follows months or years later. In 25% of patients, jaundice may be the presenting symptom.

Darkening of the skin, hirsutism, anorexia, diarrhea, and weight loss may also be present. Less commonly, patients may present with a complication of portal hypertension, such as variceal bleeding or ascites, or have the disease identified during the workup of an accompanying connective tissue disease such as Surgren’s syndrome, scleroderma or CREST syndrome, systemic lupus erythematosus, or thyroiditis or during routine blood screening. In fact, up to 50% of the patients are asymptomatic when initially diagnosed. Physical findings are variable and depend on the extent of the disease. Hepatomegaly, splenomegaly, spider angiomata, palmar erythema, hyperpigmentation, hirsutism, and xanthomata may be present.

Serum tests. Serum alkaline phosphatase level is usually elevated markedly (2-20 times normal). The values for 5’-nucleotidase and Оі-glutamyltranspeptidase parallel those for alkaline phosphatase. Serum transaminase levels are slightly elevated (1-5 times normal). The serum bilirubin level usually rises with the progression of the disease and is a prognostic indicator of the disease. Serum albumin and the prothrombin time are normal early in the course of the disease. A low serum albumin level and prolonged prothrombin time that are not corrected by vitamin K therapy indicate advanced disease: Both findings are poor prognostic signs. Serum lipid levels may be strikingly elevated. Patients with early Primary biliary cirrhosis tend to have slight elevations of low-density lipoproteins (low-density lipoprotein) and very-low-density lipoproteins (VLDL) and striking elevations of high-density lipoproteins (HDL). Patients with advanced disease have marked elevations of low-density lipoprotein and decreased HDL; lipoprotein X is present in patients with chronic cholestasis. These changes in serum lipoprotein composition appear to be due to inhibition of hepatic lipase activity in early Primary biliary cirrhosis and decreased cholesterol esterification in advanced disease. Serum ceruloplasmin is normal or elevated in contrast to Wilson’s disease.

Diagnosis of Primary biliary cirrhosis is not difficult in a middle-aged woman presenting with pruritus, an elevated alkaline phosphatase level, and the presence of antimitochondrial antibody in the serum. Pathopneumonic findings in the liver biopsy confirm the diagnosis. However, if atypical features are present, such as absence of the mitochondrial antibody, male gender, or young age, other possibilities need to be excluded.

The anatomy of the extra- and intrahepatic ducts may be satisfactorily demonstrated with endoscopic retrograde cholangiography to rule out the first three of these possibilities.

The treatment of Primary biliary cirrhosis can be divided into three areas: (a) management of symptoms, (b) specific drug treatments to halt the progression of the disease, and (c) hepatic transplantation.

Pruritus is the most distressing symptom of Primary biliary cirrhosis. The cause of pruritus is not known. It may be related to the retention of bile salts in the skin, or it may be immunologically mediated.

Cholestyramine. Oral cholestyramine is the treatment of choice. By binding and removing bile salts in the intestine, it interrupts the enterohepatic circulation and thus decreases the blood levels of bile salts. The usual dosage is 4 g before and 4 g after breakfast. Many patients require another 8 g with the evening meal. Cholestyramine reduces vitamin A, D, E, and K absorption and may contribute to worsening of osteoporosis, osteomalacia, and hypoprothrombinemia.

Rifampin, a potent inducer of hepatic drug metabolizing enzymes, also relieves itching. Cholestipol, naloxone, naltrexone, cimetidine, UVB light, and metronidazole have also been reported to be of benefit in some patients. 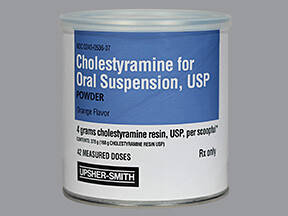 Hyperlipidemia. Skin xanthomas and xanthelasmas are likely to occur when the total serum lipids exceed 1800 mg/dl. Cholestyramine, 12 to 16 g per day, is the treatment of choice. Treatment with corticosteroids, phenobarbital, and plasmapheresis also has been reported to result in regression of the lipid deposits. Repeated plasmapheresis or plasma exchange may relieve symptoms of xanthomatous neuropathy. Clofibrate therapy of hypercholesterolemia is contraindicated in Primary biliary cirrhosis.

Malnutrition. Steatorrhea is common and may reach levels as high as 40 g of fat per day in patients with Primary biliary cirrhosis. In such patients, nocturnal diarrhea, weight loss, and muscle wasting may be prominent. Malabsorption in Primary biliary cirrhosis is multifactorial. The progressive bile duct lesion in these patients reduces bile salt concentrations in the small intestine and markedly decreases micelle formation and fat absorption. Also, the incidence of celiac sprue is increased in this patient population, which adds to the malabsorption.

Patients should be screened for fat-soluble vitamin deficiency. Oral vitamin A (25,000-50,000 units per day) should be given to patients with advanced Primary biliary cirrhosis to prevent night blindness, with monitoring of serum levels to prevent toxicity. Some patients may require oral zinc supplementation for improved dark adaptation. Vitamin E deficiency is also common in patients with Primary biliary cirrhosis, but routine supplementation is not indicated. Vitamin K deficiency and hypoprothrombinemia may be monitored by following the prothrombin time. Oral vitamin K supplementation usually corrects this deficiency.

Ursodeoxycholic acid at doses of 12 to 15 mg/kg of body weight per day is now used as the initial therapy of Primary biliary cirrhosis. It improves the serum alkaline phosphatase, aminotransferase, IgM, and bilirubin levels. Histologic improvement is less impressive, but the rate of worsening is slowed. Also, the need for cholestyramine is decreased in patients with pruritus. It appears that ursodeoxycholic acid is safe, effective, well tolerated and its efficacy is maintained for up to 10 years. It also significantly prolongs the time before liver transplantation is required.

Colchicine, an antiinflammatory and anticollagen agent at doses of 0.6 mg daily or twice daily, has been shown to decrease mortality from liver disease and improve serum levels of bilirubin, albumin, alkaline phosphatase, aminotransferases, and cholesterol. After 2 to 4 years, however, there is no improvement in histology, symptoms, or physical findings. Except for diarrhea in a few patients, there is no toxicity. Colchicine slows the progression of Primary biliary cirrhosis but does not stop it. It seems likely that colchicine is of some benefit to patients with Primary biliary cirrhosis.

Methotrexate. Low-dose oral pulse methotrexate 0.25 mg/kg per week induces striking improvement in biochemical tests, fatigue, and pruritus. In some patients, histologic improvement also has been seen. In one study 15% of patients with Primary biliary cirrhosis treated with methotrexate developed interstitial pneumonitis. This high incidence has not been seen in other studies. At this time, methotrexate is best reserved for patients with Primary biliary cirrhosis who do not respond to Ursodeoxycholic acid  and/or colchicine and are noted to be clinically worsening.

Most patients with Primary biliary cirrhosis are initially treated with Ursodeoxycholic acid  12 to 15 mg/kg body weight per day. In patients whose liver chemistry tests do not normalize in 6 months and/or whose liver biopsies fail to improve or worsen after one year of treatment with Ursodeoxycholic acid , colchicine is added to the treatment regimen. Methotrexate is added if the liver biopsy does not improve or worsens after one year of treatment with Ursodeoxycholic acid  and colchicine. It is reported that using this individualized approach of stepwise combination therapy more than 80% of patients with precirrhotic Primary biliary cirrhosis has responded by improvement of their symptoms, normalization of the liver chemistry tests and improvement of the liver histology.