Variceal bleeding primarily reflects portal hypertension. The role of acid reflux and its contribution to initiation of variceal bleeding is not clear. Even though there is no clear agreement as to whether bleeding correlates with the severity of portal hypertension, it is generally accepted that hemorrhage usually is seen with a portal pressure above 12 mm Hg and is more likely in patients with large varices. 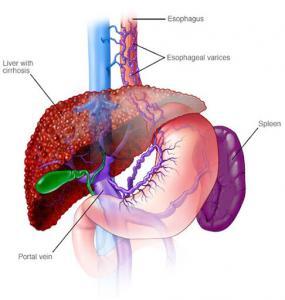 The presence of varices may be detected by barium swallow and upper gastrointestinal  series (40% sensitivity), angiography, and endoscopy. Upper gastrointestinal endoscopy is preferred; it not only shows the presence and size of the varices but also reveals whether they are the sites of bleeding. Forty percent of the bleeding in patients with cirrhosis with known varices has a nonvariceal source. Congestive or portal hypertensive gastropathy is a major source of bleeding in these patients.

Once esophageal varices are diagnosed, the risk of bleeding ranges from 25% to 35% within one year of diagnosis of large varices. Risk factors for variceal bleeding include size of varices, severity of liver disease, and presence of active alcohol consumption. The overall mortality of variceal bleeding is 70% to 80% in patients with cirrhosis. The prognosis is dependent on the patient’s nutritional status, presence or absence of ascites, encephalopathy, bilirubin level, albumin level, and prothrombin time (see modified Child’s criteria in Table MODIFIED CHILD’S CLASSIFICATION).

Prompt care of the patient with massive hematemesis or melena from bleeding esophageal or gastric varices requires coordinated medical and surgical efforts.

The first step is to ensure adequate circulation with transfusion of blood, fresh-frozen plasma, and, if necessary, platelets. Because patients with liver disease often have deficiency of clotting factors, the infusion of fresh blood or fresh-frozen plasma is important.

After the vital signs are stabilized, the site and cause of the bleeding should be established by endoscopy. If bleeding is too brisk and endoscopic diagnosis is not possible, angiography may be performed to determine the site of bleeding and the vascular anatomy of the portal circulation.

Choice of therapeutic method. Once the diagnosis of active variceal bleeding is made, there are several therapeutic options. The treatment of choice is endoscopic sclerotherapy or endoscopic variceal banding.If these methods are not immediately available, medical drug therapy, balloon tamponade, or transhepatic variceal obliteration may be used. Surgical therapy with portal-systemic shunting carries a very high mortality but may be lifesaving. Transjugular introduction of an expandable stent (transjugular intrahepatic portal-systemic shunt) into the liver may create a portal-systemic shunting with much less morbidity or mortality.

Endoscopic sclerotherapy, the direct injection of a sclerosing agent into the esophageal varices, is effective in the immediate control of variceal bleeding. This technique is preferentially used as an initial therapy before the infusion of vasopressin or balloon tamponade. The sclerosants most commonly used are tetradecyl, sodium morrhuate, and ethanolamine oleate. The sclerosing agent is injected directly into the variceal wall or into the mucosa between the varices. It causes clotting of the varices and a severe necrotizing inflammation of the esophageal wall followed by a marked fibrotic reaction.

Endoscopic banding of esophageal varices has been shown to be as effective or slightly more effective than injection sclerotherapy in the initial treatment of bleeding esophageal varices. The technique requires expertise and a cooperative patient. Tracheal intubation and sedation of the patient may be necessary.

Drug therapy. Although endoscopic banding or sclerotherapy is widely accepted as the treatment of choice for acutely bleeding esophageal varices, drug therapy may be a useful adjunctive treatment, particularly in severe hemorrhage and when bleeding is present from sites inaccessible to sclerotherapy (e.g., portal hypertensive gastropathy, gastric fundal varices, varices in the more distal gastrointestinal tract). Several agents have been evaluated in the setting of acute portal hypertensive bleeding: vasopressin and its analogs with or without short- acting nitrates and somatostatin and its analog octreotide.

Vasopressin (Pitressin). Parenteral vasopressin results in constriction of the splanchnic blood flow and subsequent decrease in portal venous pressure. There is no clear evidence that direct infusion of vasopressin into the superior mesenteric artery is more effective or less toxic than intravenous (intravenous) administration of the drug. The intravenous route is preferred initially.

A continuous infusion of 0.4 U/min (or up to 0.9 U/min if necessary) is given for 4 to 12 hours with subsequent gradual decrease in the dose for duration up to 36 to 48 hours. The complications of vasopressin therapy are generalized vasoconstriction leading to myocardial and peripheral ischemia, lactic acidosis, cardiac arrhythmias, and hyponatremia (antidiuretic hormone effect).

Somatostatin. Somatostatin appears to be highly selective in its ability to reduce splanchnic blood flow and hence reduce portal pressure. It has been shown to be as effective as vasopressin with considerably fewer hemodynamic effects. It can be administered for prolonged periods. The possible side effects are nausea, abdominal pain, and minor disturbances in glucose tolerance with prolonged use. Octreotide, the synthetic somatostatin analog, appears to be as effective as somatostatin. The dosages are as follows: somatostatin: 250-Вµg intravenous bolus followed by 250 Вµg per hour intravenous continuous infusion up to 5 days; octreotide: 50-mg intravenous bolus followed by 50 mg per hour intravenous. In cases of severe bleeding, the bolus dose may be repeated and the dose of somatostatin or octreotide in the continuous infusion may be doubled.

Octreotide has replaced vasopressin in the treatment of bleeding esophageal varices.

Balloon tamponade. The Sengstaken-Blakemore (SB) and the Minnesota tube consist of two balloons, an elongated esophageal and a round gastric balloon, with orifices in the tube to suction the stomach and upper esophagus of collecting secretions. Variceal tamponade with the SB tube stops the bleeding, at least temporarily, in more than 90% of patients. Many difficulties that have been associated with the procedure can be avoided if the patient is monitored in an intensive care unit. The proper procedure requires inserting the tube through either the mouth or the nose, inflating the gastric balloon with 250 to 300 mL of air, and positioning the balloon tightly against the gastroesophageal junction. In most patients, this procedure alone stops the bleeding. If the bleeding persists, the esophageal balloon must be inflated to a pressure of 30 to 40 mm Hg. The main complications of the SB tube are esophageal or gastric ischemia, rupture, and aspiration. Because the chance for complications from the SB tube increases with the length of time the balloon is kept inflated, the balloon should be deflated after 24 hours. If bleeding has stopped, the SB tube may be removed in another 24 hours.

Percutaneous transhepatic obliteration of the varices with either a sclerosant or embolization controls active variceal bleeding 70% of the time. However, bleeding usually recurs. It should be used only as a secondary approach after other therapy has failed or for bleeding gastric varices in patients who are poor surgical risks.

Emergency Portal-systemic shunts have been compared with endoscopic sclerotherapy in the treatment of patients with severely decompensated alcoholic liver disease and active variceal bleeding. Subsequent recurrence of bleeding may be less frequent in the shunted patients, but liver failure and encephalopathy were greater in this group. The survival was comparable in the two groups.

Insertion of a prophylactic Portal-systemic shunt prior to bleeding is not recommended for patients with cirrhosis and varices. The resultant overall survival is not improved. There is evidence to suggest that prophylactic endoscopic sclerotherapy and obliteration of large esophageal varices prevents bleeding.

Transjugular intrahepatic portal-systemic shunts. Partial portal decompression may be achieved by creating a channel between the hepatic vein and the portal vein via a percutaneous transjugular approach.

Elastic recoil of the liver parenchyma occluding the shunt lumen is prevented by the use of an expandable metallic endoprosthesis. With use of TIPS, portal pressure has been reduced from 34 mm Hg to 22 mm Hg, with effective control of variceal bleeding. Shunt patency is 90% up to 6 months afterward and may be restored by shunt dilatation or restenting. Late complications of TIPS are encephalopathy and ascites in about 10% to 20% of the patients.

Surgical transection of the esophagus, devascularization of the distal esophagus and proximal stomach, and splenectomy have been used in patients with acute refractory variceal bleeding. These operations carry a very high mortality and are not routinely recommended.

Liver transplantation is curative for portal hypertension, but it is impractical in the acute setting of variceal bleeding. It is not necessary in patients with only moderate liver disease and should be reserved for patients with irreversible advanced liver disease.

Prevention of first variceal bleeding and rebleeding in cirrhosis. Nonselective beta-adrenergic receptor blockers (e.g., propranolol 20-180 mg twice daily [b.i.d.]–a dose that reduces the resting heart by 25%) have been shown to reduce portal hypertension and prevent the first variceal bleeding in patients with large varices or gastropathic hemorrhage and to decrease rebleeding; these drugs probably improve survival in patients with cirrhosis. Long-acting nitrates (e.g., isosorbide-5-mononitrate) have been shown to be at least as effective as propranolol in the prevention of first bleeding in cirrhosis. It has fewer side effects than propranolol and may be used as an alternative.

Beta-blockers are minimally effective in patients with decompensated cirrhosis. Propranolol also has been shown to prevent bleeding from portal hypertensive gastropathy. Beta-blocker therapy should not replace sclerotherapy or variceal band ligation in the early management of variceal bleeding. It should be considered as adjunctive therapy in the long-term management of portal hypertension.