Home > Depression > Could the Blues Increase Your Risk for Stroke? 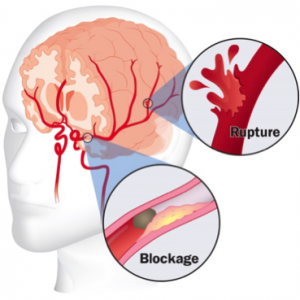 Many factors that put individuals at risk for stroke have been identified, including physical inactivity, high cholesterol, obesity, use of alcohol or cigarettes, diabetes and high blood pressure. For the first time, researchers have identified a psychological factor that also affects stroke risk — depression.

A study published in the July/August issue of Psychosomatic Medicine reports that increasingly, levels of depression are associated with increasing levels of risk for later stroke. This was true even for those who had only moderate symptoms of depression, and who might not actually be diagnosed with clinical depression.

“The suggestion of an increasingly strong relationship between level of depressive symptoms and stroke indicates that reducing depression may be important for everyone, not just those whose symptoms may have clinical implications,” stated Dr. Bruce S. Jonas of the National Center for Health Statistics in Hyattsville, Maryland, part of the Centers for Disease Control and Prevention (CDC).

Jonas and colleagues looked at a nationally representative sample of more than 6,000 adults, ages 25 to 74, when the National Health and Nutrition Examination Survey began in the early 1970s. The researchers surveyed participants periodically for an average of 18 years. They analyzed the information collected to see if symptoms of depression reported at the beginning of the study were related to incidence of stroke over the following decades. They discovered a strong relationship.

Scores on the depression questionnaire were sorted into high, medium and low. People who reported high levels of depressive symptoms were 73 percent more likely to have a stroke over the next two decades than those with low levels. Even those with moderate levels of symptoms had a 25 percent increase in risk.

To see if their findings were influenced by the other known risk factors for stroke, Jonas and colleagues tried several different analyses. However, even when they accounted for age and the existence of other risk factors, the results were similar. The researchers even tried excluding people who had strokes within a few years of completing the depression questionnaire, to see if changes that were already happening to their bodies might influence the relationship — but depression still predicted later stroke.

Jonas and colleagues also report gender and racial differences in the association between depression and stroke. Among white men, white women, and all African-Americans (there weren’t enough to group the sexes separately), higher levels of depressive symptoms were significantly related to an increased risk of stroke, regardless of whether age and other risk factors were taken into account. No differences, however, were found between those 25 to 59 years of age and those 60 to 74.

These findings do not mean that the other risk factors aren’t important, Jonas points out. “Risk factors such as baseline age, gender, smoking status, systolic blood pressure, serum cholesterol level, history of diabetes and history of heart disease remain strong predictors of developing stroke,” he explained. “However, this study indicates that depression levels may also play an important role.”

The researchers point out that depression increased the risk of stroke about as much as would a 40-point increase in systolic blood pressure.

Researchers don’t fully understand the connection between depression and stroke. The changes in brain chemical activity seen in people with depression may affect the body’s ability to regulate itself and handle stress. Other research has found that depression appears to alter the hormonal and immune systems. Still other studies report increases in platelet activity among depressed people. Depression also appears to be a risk factor for high blood pressure and heart disease, both of which contribute directly to stroke risk.

Clearly, a lot more research is needed to understand how depression affects the risk for stroke. In the meantime, however, the current findings suggest that helping people with symptoms of depression may not only increase their immediate quality of life, but also decrease their risk of having a stroke further down the line.