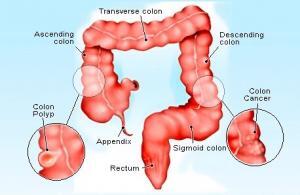 The patient underwent a colon cancer staging evaluation, including computed tomography scan of the abdomen and pelvis that showed no signs of distant metastases. Based on the patient’s age, family history, and cancer histology, Hereditary non-polyposis colorectal cancer was strongly suspected. Further testing of the tumor specimen revealed that the ascending colon cancer exhibited the microsatellite instability-high phenotype. The patient was referred for genetic counseling and a germline mutation was detected in MLH1.

Colorectal cancer treatment is determined largely by TMN stage and may include surgical intervention, chemotherapy, and/or radiation therapy. Surgical resection is generally the mainstay of colorectal cancer therapy, unless contraindicated by tumor stage, patient co-morbidities, or other factors. At least 12 regional lymph nodes should be removed along with the primary tumor for definitive pathologic staging. Anastamotic site recurrence rates for all colorectal cancer are 2-4% but may be as much as 10 times higher for rectal cancers, due to differences in surgical technique and/or tumor biology. Resection of isolated liver and lung metastases appears to improve the survival rate for some patients. 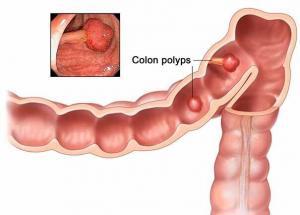 Postoperative (also known as “adjuvant”) chemotherapy is routinely recommended for stage III CRCs and may be considered for select stage II CRCs , using one of several combination regimens including 5-fluorouracil (5-FU), leucovorin, and oxaliplatin (collectively referred to as FOLFOX). In a large, randomized, controlled trial of subjects with stage II or III colorectal cancer, adjuvant FOLFOX therapy improved the 3-year disease free survival rate from 72.9 to 78.2%. On average, treating 19 patients with FOLFOX instead of 5-FU and leucovorin would prevent one additional colorectal cancer recurrence at 3 years. However, the added benefit of oxaliplatin is counter-balanced by possible drug-induced toxicities, such as peripheral neuropathy.

An array of chemotherapy options exists for patients with metastatic colorectal cancer. First-line combination therapy with either FOLFOX or FOLFIRI (substituting irinotectan for oxaliplatin) appears to provide a response rate (denned as a composite of either complete disappearance of all detectable disease or as a decrease in tumor size by RECIST criteria) of 31-56%, with a median progression-free survival of 7-8 months. Further benefits might be achieved by adding a biologic agent such as bevacizumab.

Patients who develop bowel obstruction or other complications of locally advanced or metastatic disease may benefit from palliative chemotherapy or radiation therapy. Palliation through mechanical stenting and decompression techniques is also feasible.