A 28-year-old woman is referred to a gastroenterologist by her primary care physician for evaluation and management of abdominal pain and constipation for the past year. The patient reports having intermittent abdominal pain and bloating that are associated with feeling constipated. Her constipation symptoms include hard stools, difficulty evacuating stools, and sensation of incomplete evacuation. She has a bowel movement every 1 to 2 days. Her abdominal pain and bloating improve after having a bowel movement. She has had similar symptoms since college, which she associated with stress, but they were milder and she never sought care for them. Now her symptoms, especially the pain and bloating, make it difficult for her to concentrate on her work, and she misses work 1-2 days per month. Her sleep is sometimes disturbed, particularly when her symptoms are worse and she feels tired during the day. She has tried increasing her fluid intake and different over-the-counter laxatives and fiber supplements. While these medications help to loosen her stool, she does not like taking them. The discomfort and urgency caused by the laxatives are very bothersome, and she still has pain and bloating which is sometimes increased with the medication. She denies unintentional weight loss, blood in the stool, and a family history of colon cancer. She has annual pelvic examinations by her gynecologist and they have been normal. Her physical examination is normal except for a mildly distended lower abdomen which is tender to palpation without rebound. A rectal examination is normal without paradoxical pelvic floor contraction during bear down command. The diagnosis of irritable bowel syndrome with constipation is discussed with the patient. She is reassured that while the symptoms can be debilitating and difficult to treat, they can be managed with appropriate care. Educational materials are given to the patient. After several regular visits with her provider, her symptoms have improved by avoiding certain food triggers and starting lubiprostone. Although her abdominal pain, bloating, and sensation of incomplete evacuation are improved, she continues to be bothered by these symptoms. A low dose of a tricyclic antidepressant as well as a probiotic are recommended.

Assessing severity and impact of the symptoms on the patient’s HRQOL is important, as this will shape a management strategy. Although irritable bowel syndrome is characterized by altered stool frequency and/or consistency, the astute clinician will not assume that the patient seeks care primarily for the relief of these symptoms. Some patients seek care out of fear that they have a life-threatening illness such as colon cancer. These patients may find relief in receiving a positive diagnosis, reassurance, and education and may not require pharmacotherapy. However, patients with moderate to severe symptoms often require pharmacological and/or psychological therapies.

A good health-care provider-patient relationship is the cornerstone of effective care of irritable bowel syndrome. The quality of this relationship has been shown to improve patient outcomes. Additionally, addressing psychosocial factors may improve health status and treatment response ,

Diet. While in most patients symptoms cannot be completely relieved through diet alterations alone, including elimination diets, diet-related exacerbations can be minimized. Trigger foods may be identified if the patient keeps a food and symptom diary. Common food triggers include high-fat foods, raw fruits and vegetables, and caffeinated beverages.

Psychotherapy and Hypnotherapy. There are several psychological and behavioral treatments for which there is convincing evidence of efficacy. Cognitive-behavioral therapy is a short-term, goal-oriented form of psychotherapy that focuses on the role that thoughts play in determining behaviors and emotional responses. Gut-directed hypnotherapy is hypnosis that is directed towards relaxation and control of intestinal motility by repeated suggestion of control over symptoms followed by ego-strengthening.

Pharmacologic therapies are summarized in Table Agents available to treat irritable bowel syndrome by predominant symptom, which is designed to be a practical clinical reference and includes recommended dosages, pertinent information, and numbers needed to treat where available.

Bulking Agents. Bulking agents include psyllium, meth-ykellulose, corn fiber, and ispaghula husk. Fiber supplementation has often been used as initial management of irritable bowel syndrome. Fiber may increase stool frequency in irritable bowel syndrome-C, but this may not be well-correlated with relief of pain or other symptoms. Additionally, bulking agents in quantities that are therapeutic can cause adverse effects including bloating and abdominal pain and discomfort, and therefore it may be helpful to recommend a gradual initiation of the dose to minimize side effects, particularly in those who have relatively little fiber in their diets or those with predominant bloating. Soluble fiber (psyllium, ispaghula, calcium polycarbophil) is more effective than insoluble fiber (corn, wheat bran). 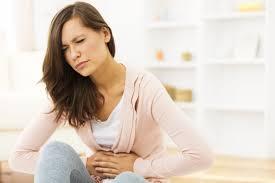 Antispasmodics. Antispasmodics work by either by a direct effect on intestinal smooth muscle (e.g., mebever-ine, pinaverine) or via their anticholinergic or antimusca-rinic properties (e.g., dicyclomine, hyoscamine). A recent meta-analysis suggests good efficacy for antispasmodics for global relief of irritable bowel syndrome symptoms although most of the studies are not of high quality. An unfavorable side-effect profile, including dry mouth, constipation, urinary retention, and visual disturbances, may preclude treatment at therapeutic doses in some patients.

Serotonergic Agents. Tegaserod is a selective 5HT4 partial agonist that stimulates gut transit and may also have an effect on visceral sensation. Several large and well-designed trials have shown tegaserod to be more efficacious than placebo in improving symptoms of irritable bowel syndrome-C in women. In 2007, tegaserod was suspended and subsequently withdrawn by the FDA based on a small but statistically significant increase in the incidence of cardiovascular ischemic events in patients taking tegaserod compared to those taking placebo (0.1% vs. 0.01%). All of these patients had a history of cardiac disease or risk factors. It is currently only available through the FDA on an emergency basis.

Alosetron is a 5HT3 receptor antagonist that is currently available under a restricted use program and is approved only for women with severe irritable bowel syndrome-D who have failed conventional therapy. This restriction is due to the occurrence of gastrointestinal-related adverse events including ischemic colitis and serious complications of severe constipation. A systematic review concluded that there is a significantly increased rate of ischemic colitis among alosetron-using patients compared to placebo-using patients (0.15% vs. 0.0%), but no significant difference in the rate of serious complications of constipation. All of the alosetron-using patients with ischemic colitis had a reversible colopathy without long-term sequelae and most cases occurred within the first month of treatment. The restriction notwithstanding, alosetron has been proven efficacious in multiple clinical trials for relief of abdominal pain or discomfort and urgency.

A recent meta-analysis of placebo-controlled trials of selective serotonin reuptake inhibitors in irritable bowel syndrome suggests good efficacy for these agents although most studies have small sample sizes. Selective serotonin reuptake inhibitors have an effect on the physical component of HRQOL, symptom frequency and abdominal pain, and these effects appear to be independent of effects on mood ,

Probiotics are hypothesized to work by several mechanisms. These include a shift from a proinflammatory to an anti-inflammatory cytokine profile and enhanced epithelial barrier function. While many species of probiotics subjectively reduced flatulence and bloating, the best evidence for global improvement in irritable bowel syndrome symptoms is for formulations containing species of Bifidobacterium.

Because even the most effective treatments for irritable bowel syndrome do not help all patients, many turn to Complementary and Alternative Medicine in search of other treatment options. Additionally, Complementary and Alternative Medicine treatments often provide a more holistic approach and meaningful clinician-patient relationship than western medicine. Acupuncture is popular therapy for irritable bowel syndrome patients. The authors of a recent Cochrane review concluded that acupuncture was likely no better than sham acupuncture, but may have been better than usual care; however, more research is required to make any recommendations. Other alternative or herbal medicines that have been studied are Chinese herbal medicine, peppermint oil, extract of artichoke, carmint, the herbal mixture STW 5, and melatonin.