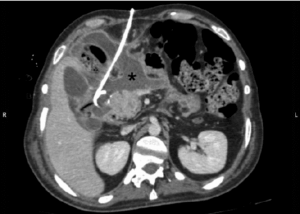 A 44-year-old woman presented with severe epigastric pain requiring administration of narcotic agents. Abdominal ultrasound revealed multiple small gall stones. The common bile duct was not dilated. Serum amylase and lipase values were five times the upper limit of normal. Contrast-enhanced computed tomography scan showed an enlarged pancreas with heterogeneous enhancement and considerable fluid around the pancreas. She was started on fluid replacement at a rate of 200ml/h. Twenty-four hours after admission, her hematocrit was noted to be increased from 48 to 50 and blood urea and nitrogen (BUN) from 17mg/% to 24mg/%. Because of labored respiration and deterioration of oxygenation, she was transferred to an intensive care unit, intubated with assisted ventilation, and eventually needed dialysis for acute renal failure. She was also treated prophylactically with imipenem and received total parenteral nutrition. A computed tomography scan obtained weekly showed evolution from necrotizing pancreatitis to walled-off pancreatic and peripancreatic necrosis involving 85% of the pancreas. She gradually improved, was extubated, and her renal function returned to normal. However, during the next several weeks, she developed abdominal pain each time she tried to consume a low fat diet such that her caloric intake remained unsatisfactory.

The therapy of interstitial pancreatitis is supportive. Fluid resuscitation and careful monitoring of oxygen saturation are key. Organ failure occurs in less than 10% of cases and is usually transient. 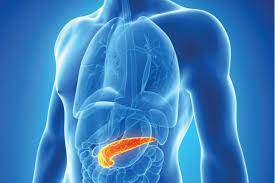 Patients who will be without oral nourishment for several weeks should be started on nasojejunal feeding. If this is ineffective, total parenteral nutritional will be needed.

Nasojejunal feeding is currently thought to be safer and less expensive than total parenteral nutrition, but has not as yet been proven to reduce the severity of acute pancreatitis. Several recent randomized prospective placebo-controlled trials have failed to establish benefit of prophylactic antibiotics to prevent the development of infected necrosis. The use of antibiotics should be restricted to those who have an infection, and at times during a prolonged hospitalization, a patient may require brief courses of antibiotics for well-documented infection, such as pneumonia, urinary or respiratory track infection. Antibiotics should be discontinued once infections are properly treated. At other times, a patient may appear septic, may be placed on broad-spectrum antibiotics for a few days while appropriate cultures are obtained. If a source of infection is not discovered, the antibiotics should be discontinued.

The role of endoscopic sphincterotomy in severe biliary pancreatitis remains somewhat controversial. In general, if there is strong suspicion of a retained stone in the common bile duct and persistent organ failure that could reflect ascending cholangitis, an endoscopic biliary sphincterotomy is recommended.

In the case under consideration, early transfer to an intensive care unit was required when there was evidence of organ failure that required more intensive supervision. Her fluid resuscitation of only 200ml/h was clearly inadequate in view of the increased hematocrit and increased BUN during the first 24h of hospitalization. The patient was placed on total parenteral nutrition rather than nasojejunal feeding. The patient was also given imipenem as a prophylactic antibiotic. A biliary sphincterotomy was not performed because there was no evidence of ascending cholangitis, her common bile duct was not dilated, and her liver function tests returned to normal within 48h. Because she developed severe abdominal pain each time she tried to eat, she underwent a surgical cystojejunostomy with aspiration of the fluid and debridement of necrotic pancreatic tissue and left the hospital 1 week after the surgery, receiving insulin for diabetes mellitus and pancreatic enzymes for steatorrhea.