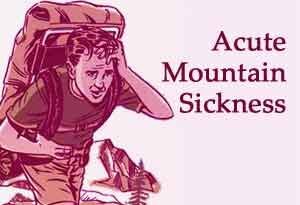 Rapid ascension and exposure to altitudes greater than 8,000 feet without appropriate acclimatization is an environmental malady risked by many outdoors enthusiasts. Initiating within 1 to 2 days, this spectrum of symptoms has collectively been termed Altitude Sickness (AS) or Acute Mountain Sickness (AMS). As elevation increases, the partial pressure of oxygen decreases, causing climbers to experience hypoxemia. At 11,500 feet, the oxygen in the air is about 65% of the amount available at sea level, which forces the body to struggle to maintain normal levels of oxygenation. Ventilation may decrease further as one sleeps, potentiating the hypoxemia (Table 1).

The compensatory respiratory response to hypoxemia involves an increase in minute ventilation, which may lead to respiratory alkalosis. The hypoxic condition can increase capillary permeability and leakage of fluid into the surrounding interstitium, leading to the more severe disorders of high altitude pulmonary edema (HAPE) and high altitude cerebral edema (HACE). These conditions are more serious, require emergency medical attention, and are beyond the scope of this review.

Acute mountain sickness is the most common of the high altitude pathologies. It manifests as influenza-like symptoms, including headache, malaise, and anorexia. It usually becomes clinically apparent 6 to 48 hours after rapid ascent to high altitudes (>8,000 feet). This syndrome occurs in about 25% of people at 8,000 feet but increases in incidence as the elevation increases. The most effective prevention is slow ascent or a 2- to 4-day acclimatization at intermediate altitudes (6,000 to 8,000 feet) followed by gradual ascent. Worsening of symptoms warrants descent to at least 1,650 feet lower than the altitude at which symptoms began. It should be noted that despite the importance of keeping physically fit, training (at lower levels) will not facilitate the adaptive process, nor will it minimize one’s chances of getting AMS.

It is important for pharmacists to be able to counsel and educate prospective recreationists regarding drugs that should be avoided or ones that may precipitate AMS. These include CNS depressants and drugs that may decrease ventilation and worsen hypoxia (e.g., ethanol, benzodiazepines).

Acetazolamide (Diamox and others) can be used in the treatment or prevention of acute mountain sickness. A carbonic anhydrase inhibitor, acetazolamide decreases both the incidence and the severity of AMS by causing a sodium and bicarbonate diuresis, preventing fluid retention, decreasing alkalosis, and causing a metabolic acidosis. The acidosis stimulates ventilation, decreasing hypoxemia during sleep. The effective treatment dose is 125 to 250 mg every 12 hours beginning within 24 hours of symptom onset and continuing with descent. Total doses up to 1.5 grams have been used. The drug can cause transient myopia and tingling of the fingers, toes, and lips, but it is generally well tolerated. Because of the diuretic effect and the problem associated with dehydration mentioned above, it is imperative that an acute awareness of fluid intake and balance be maintained. Acetazolamide also belongs to the sulfonamide drug class; thus, skin eruptions and photosensitivity should be a component of the counseling. An allergy to sulfa precludes its use.

Some medical wilderness experts also advocate dexamethasone (4 to 8 mg loading dose, followed by 4 mg every six hours orally or intramuscularly) by itself or in addition to acetazolamide. Treatment trials with dexamethasone have demonstrated marked improvement within 12 hours. Descent is usually required if dexamethasone is used. Discontinuation of the drug without descent usually leads to recurrence of symptoms.

Furosemide has been shown to be useful in the treatment of HAPE, but extensive evaluations in treating acute mountain sickness are lacking. If peripheral edema is prominent, diuretics (e.g., furosemide, thiazides) can be successfully used, as well as nonpharmacological treatment (i.e., salt restriction). Spontaneous diuresis usually occurs after descent to lower altitudes. The use of diuretics warrants that attention be paid to hydration status.

Adjunctive agents include analgesics such as ibuprofen, which was shown to be superior to placebo in reducing high altitude headache severity and speed of relief in one randomized controlled crossover trial of military personnel. Researchers theorized that a prostaglandin-induced increase in cerebral microvascular permeability may be a component of the pathology of AMS; thus, prostaglandin inhibitors may be of benefit. Acetaminophen is also recommended by some experts for mild headaches; however, the 5HT1D agonist sumatriptan was shown to be inferior to ibuprofen in a controlled trial and is not recommended at this point. Phenothiazines such as prochlorperazine (5 to 10 mg IM or orally) or promethazine (50 mg orally or rectally) may be beneficial for nausea and vomiting.

The prevention of acute mountain sickness should include a graded ascent that pivots around avoiding rapid ascent to sleeping altitudes above 8,000 feet and spending 2 to 3 days at 8,000 to 9,000 feet before going higher. Several agents have been studied to prevent AMS. Acetazolamide, 125 mg to 250 mg orally twice daily, starting 24 hours prior to ascent, has been shown to be effective in preventing acute mountain sickness. One study demonstrated that 500 mg of acetazolamide in sustained-release formulation taken once daily was as effective as 250 mg of immediate-release acetazolamide taken twice daily, but had fewer side effects. It is recommended that acetazolamide be continued for 2 to 5 days at high altitude while one acclimates. Taken prophylactically, acetazolamide has been shown to decrease the frequency of AMS by about 30% to 50%.

Dexamethasone has been evaluated in varied randomized trials and has demonstrated similar efficacy to acetazolamide in reducing the incidence of acute mountain sickness. Zell, et al. studied the combination of dexamethasone acetate (4 mg orally four times daily) and acetazolamide (250 mg twice daily), finding the combination to be significantly superior to either agent alone. Rock, et al. found that dexamethasone in a dosage as low as 4 mg every 12 hours was effective in reducing AMS symptoms. Johnson and Rock also suggest a preventative dose of dexamethasone 2 to 4 mg orally every 6 hours starting the day of ascent and continuing for 3 days at the higher altitude, then tapering the regimen off over 5 days. Some experts recommend reserving dexamethasone only for treatment of acute mountain sickness or for prophylaxis in people who are intolerant or allergic to acetazolamide.

The literature reveals few data in regard to spironolactone (25 mg four times daily) use in AMS, suggesting it may have efficacy comparable to acetazolamide in preventing the symptoms of acute mountain sickness. This has not been confirmed with large randomized trials; thus, no recommendations can be forwarded.

Nifedipine, a calcium channel blocker, has also been studied, albeit less frequently. In the only randomized trial for prophylaxis of AMS, nifedipine was effective in reducing pulmonary arterial pressures, but not in oxygen exchange or the manifestations of acute mountain sickness. Most experts suggest it may be of use in HAPE (high altitude pulmonary edema), but do not recommend it for prevention of AMS.