A 62-year-old man is being managed in the intensive care unit following a large anterior wall MI. He has been appropriately managed with oxygen, aspirin, nitrates, and P-adrenergic receptor blockers but has developed recurrent episodes of ventricular tachycardia. During these episodes he remains conscious but feels dizzy, and he becomes diaphoretic and hypotensive. He is given an IV bolus of lidocaine and started on an IV lidocaine infusion.

To what class of antiarrhythmic does lidocaine belong?

What is lidocaine’s mechanism of action?

Summary: A 62-year-old man develops symptomatic ventricular tachycardia after an MI. He is begun on IV lidocaine.

Class of antiarrhythmic to which lidocaine belongs: Ib.

Lidocaine is a common treatment for ventricular tachycardia in a patient who is symptomatic and remains conscious. It works by blocking Na+ channels and is highly selective for damaged tissue. This makes it useful for the treatment of ventricular ectopy associated with an MI. It is administered as an IV bolus followed by a continuous drip infusion. It is metabolized in the liver and undergoes a large first-pass effect. It has many neurological side effects, including agitation, confusion, and tremors, and can precipitate seizures.

Approach to pharmacology of the antiarrhythmics

1. Know the classes of antiarrhythmic agents and their mechanisms of action.

2. Know the indications for the use of antiarrhythmic agents.

3. Know the adverse effects and toxicities of the antiarrhythmic agents.

Heart block: Failure of normal conduction from atria to ventricles.

Arrhythmias arise as a result of improper impulse generation or improper impulse conduction. The abnormal action potentials cause disturbances in the rate of contraction or in the coordination of myocardial contraction. The molecular targets of antiarrhythmics are ion channels in the myocardium or conduction pathways; these may be direct or indirect effects.

There are four ion channels of pharmacologic importance in the heart: 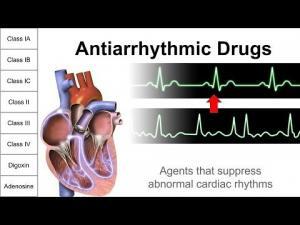 Most antiarrhythmic drugs either bind directly to sites within the pore of a channel or indirectly alter channel activity. There are approximately 20 antiar-rhythmics approved for use today. They are classified according to which of the ion channels they affect and their mechanism of action (Table Selected antiarrhythmic agents). The major arrhythmias of clinical concern are ventricular arrhythmias, atrial arrhythmias, bradycardias, and heart blocks. There is also the pharmacologic need to convert an abnormal rhythm to normal sinus rhythm (cardioconver-sion). The class of antiarrhythmics used for any particular arrhythmia depends on the clinical circumstances. The treatment of acute, life-threatening disease, in contrast with the long-term management of chronic disease, requires a different selection of antiarrhythmics.

** Moricizine blocks Na+ channels and is usually considered a class 1 antiarrhythmic, but it has properties of Ia, Ib, and Ic drugs.

Depolarization. Damaged tissues tend to be depolarized because of K+ leakage — many class I antiarrhythmics preferentially bind to depolarized tissues.

pH. Ischemic tissues are more acidic, and many class I antiarrhythmics preferentially bind to membranes at low pH.

Inactivation frequency. During arrhythmias, Na+ channels undergo more rapid cycles of activation/inactivation. At any given time there will be an increase in the number of inactive channels compared to normal tissues in a normal rhythm. Class I antiarrhythmics generally bind preferentially to Na+ channels in the inactive state.

The subclasses a, b, and c of class I antiarrhythmics are distinguished based on their ability to inhibit K+ channels.

Class Ia. Procainamide is a prototype class la antiarrhythmic that suppresses the activity of Na+ and also suppresses K+-channel activity. Administered IV, it is used for the acute suppression of supraventricu-lar and ventricular arrhythmias and for suppressing episodes of atrial flutter and atrial fibrillation. It may be administered orally for the long-term suppression of both supraventricular and ventricular arrhythmia, but toxicity limits this application. Procainamide can suppress sinoatrial (SA) and AV nodal activity, especially in patients with nodal disease, and cause heart block. Prolonged use of procainamide is associated with increased risk of ventricular tachycardias. Procainamide has some ganglionic blocking activity and can cause hypotension and decreased myocardial contractility. A limiting adverse effect of procainamide is the development of lupus-like syndrome characterized by skin rash, arthritis, and serositis. All patients on procainamide will develop antinuclear antibodies within 2 years. Procainamide is metabolized to IV-acetyl procainamide (NAPA), which has K+-channel-blocking effects. NAPA is excreted by the kidney, and plasma levels of procainamide and NAPA should both be monitored especially in patients with renal disease.

Class Ib. Lidocaine is very specific for the Na+ channel and it blocks both activated and inactivated states of the channel. It must be administered parenterally. Lidocaine has been used extensively to suppress ventricular arrhythmias associated with acute MI or cardiac damage (surgery). It has been used prophylactically to prevent arrhythmias in patients with MI, but there is controversy as to the overall benefit in decreasing mortality. Lidocaine is metabolized in the liver and has relatively short half-life (60 minutes). This limits its adverse effects which generally are mild and rapidly reversible. Overdose can produce sedation, hallucinations, and convulsions.

Class Ic. Flecainide inhibits both Na+ and K+ channels but shows no preference for inactivated Na+ channels. It delays conduction and increases refractoriness. It is effective for the control of atrial arrhythmias and it is very effective in suppressing supraventricular arrhythmias. A recent large clinical trial with patients with ischemic heart disease demonstrated that flecainide is associated with increased mortality. Currently its use is restricted to patients with atrial arrhythmias without underlying ischemic heart disease.

• Beta blockers have been shown to reduce mortality and second cardiovascular events by 25-40% in patients with post-MI.

There are a large number of beta blockers approved for use as antiarrhythmics. Two of particular interest are

1. d,l-sotalol, which is particularly effective as an antiarrhythmic agent because it combines inhibition of K+ channels with beta-blocker activity

2. Metoprolol, a specific β1 antagonist, which reduces the risk of pulmonary complications

d,l-sotalol is a racemic mixture; 1-sotalol is an effective, nonselective β-adrenergic antagonist; and d-sotalol is a class III antiarrhythmic that inhibits K+ channels. It is an oral agent with a long half-life (20 hours) that can maintain therapeutic blood levels with once a day dosing. d,l-sotalol is useful for the long-term suppression of ventricular arrhythmias, especially in patients at risk of sudden death. It is also used to suppress atrial flutter and fibrillation and paroxysmal atrial tachycardia. It is a valuable adjunct in the use of implantable cardiac defibrillators, decreasing the number of events that require defibrillation. At low doses, the P-adrenergic-blocking activity, and associated adverse effects, predominates. At higher doses, the K+-channel inhibitory effects predominate with the risk of developing ventricular tachycardia.

Drugs in this class include bretylium, dofetilide, and amiodarone. These agents act predominantly to inhibit cardiac K+ channels (IKr). This lengthens the time to repolarize and prolongs the refractory period. Amiodarone is also a potent inhibitor of Na+ channels and has α- and β-adrenergic antagonist activity.

Amiodarone has an unusual structure related to thyroxine. It can be administered IV or orally, but its actions differ depending on route of administration. IV-administered amiodarone has acute effects to inhibit K+-channel activity, slowing repolarization, and increasing the refractory period of all myocardial cell types. Administered orally in a more chronic setting, it leads to long-term alterations in membrane properties with a reduction in both Na+-and K+-channel activity and decrease in adrenergic receptor activity. Amiodarone is used extensively for ventricular and atrial arrhythmias and has little myocardial depressant activity, allowing it to be used in patients with diminished cardiac function. Administered IV, amiodarone is effective in treating ventricular tachycardia and to prevent recurrent ventricular tachycardia, and to suppress atrial fibrillation. Oral amiodarone is useful for arrhythmias that have not responded to other drugs (such as adenosine) and for long-term suppression of arrhythmias in patients at risk of sudden cardiac death.

Amiodarone has little myocardial toxicity, does not impair contractility, and rarely induces arrhythmias. Most of the adverse effects of amiodarone result from its long half-life (13-103 days) and poor solubility. Amiodarone deposits in the lung and can cause irreversible pulmonary damage. Similarly, amiodarone can be deposited in the cornea causing visual disturbances or in the skin where it can cause a bluish tinge.

The class IV antiarrhythmics act by directly blocking the activity of L-type Ca2+ channels. Verapamil and diltiazem are the major members of this class, and they have a similar pharmacology. Verapamil blocks both active and inactive Ca2+ channels and has effects that are equipotent in cardiac and peripheral tissues. The dihydropyridines such as nifedipine have little effect on Ca2+ channels in the myocardium, but are effective in blocking Ca2+ channels in the vasculature. Verapamil has marked effects on both SA and AV nodes because these tissues are highly dependent on Ca2+ currents. AV node conduction and refractory period are prolonged and the SA node is slowed. Verapamil and diltiazem are useful for reentrant supraventricu-lar tachycardias and can also be used to reduce the ventricular rate in atrial flutter or fibrillation. The major adverse effect of verapamil is related to its inhibition of myocardial contractility. It can cause heart block at high doses.

Activation of these receptors leads to increased potassium conductance and decreased in calcium influx. This results in hyperpolarization and a decrease in Ca2+-dependent action potentials. The effect in the AV node is marked with a decrease in conduction and an increase in nodal refractory period. Effects on the SA node are smaller. Adenosine is nearly 100 percent effective in converting PAT to sinus rhythm. Adenosine must be given IV, and because of its short half-life, it has few adverse effects. Flushing and chest pain are frequent but typically resolve quickly.

Digoxin blocks Na+-K+-ATPase and indirectly increases intracellular Ca2+. In the myocardium this causes an increase in contractility; in nerve tissue the predominant effect is to increase neurotransmitter release; and the parasympathetic system (vagus) is affected more than the sympathetic system. The increased vagal tone results in increased stimulation of mus-carinic acetylcholine receptors that slow conduction in the AV node. Digoxin is very effective controlling the ventricular response rate in patients with atrial fibrillation or flutter. Digoxin can be administered IV to acutely treat atrial arrhythmias or orally for long-term suppression of abnormal atrial rhythms. Digitalis is less effective than adenosine in PAT and should not be used in Wolff-Parkinson-White syndrome.

Atropine is a muscarinic antagonist that can be used in some brady-cardias and heart blocks. It can be administered to reverse heart block caused by increased vagal tone such as an MI or digitalis toxicity. Atropine is administered IV, and it exerts its effect within minutes.

[1] Which of the following is the most effective agent for converting paroxysmal atrial tachycardia to normal sinus rhythm?

[2] Which of the following best describes a pharmacologic property of amiodarone?

[3] A 45-year-old man is noted to have dilated cardiomyopathy with atrial fibrillation and a rapid ventricular rate. An agent is used to control the ventricular rate, but the cardiac contractility is also affected, placing him in pulmonary edema. Which of the following agents was most likely used?

[1] A. Adenosine is nearly 100 percent effective in converting PAT. Digoxin could be used but is less effective.

[2] D. Amiodarone blocks both Na+ and K+ channels and has α- and β-adrenoreceptor antagonist activities. The latter would indirectly decrease Ca2+-channel activity.

[3] D. Verapamil is a calcium-channel-blocking agent that slows conduction in the AV node, but it also has a negative inotropic effect on the heart.

Amiodarone is typically the first choice in acute ventricular arrhythmias.

Adenosine is the best choice to convert PAT to sinus rhythm.

Long-term benefit of using class I antiarrhythmics is uncertain, but mortality is not decreased.

Beta blockers have been shown to reduce mortality and second cardiovascular events by 25-40% in patients post-MI.