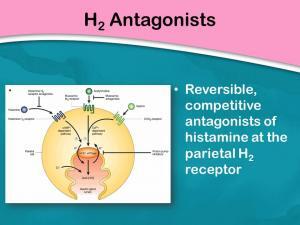 Antisecretory drugs are used in the treatment and prophylaxis of peptic ulcer disease (below) some are also employed in other disorders associated with gastric hyperacidity such as gastro-oesophageal reflux disease and dyspepsia (below). They may be divided into:

• Proton pump inhibitors, which act by blocking the enzyme system responsible for active transport of protons into the gastrointestinal lumen, namely the hydrogen/potassium adenosine triphosphatase (H+/K+ ATPase) of the gastric parietal cell, also known as the ‘proton pump’. Those described in mis site include lansoprazole, omeprazole, pantoprazole, and rabepra-zole.

• Prostaglandin analogues, which inhibit gastric acid secretion by a direct action on the parietal cell and may also inhibit gastrin release and possess cytoprotective properties. Misoprostol is an example.

Described in this site are: