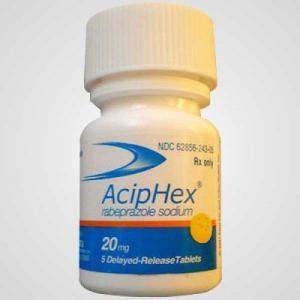 Rabeprazole sodium is a proton-pump inhibitor that suppresses gastric acid secretion by blocking acid (proton) pump within gastric parietal cells. It is indicated in short-term treatment in healing and symptomatic relief of duodenal ulcers and erosive or ulcerative gastroesophageal reflux disease (GERD); maintaining healing and reducing relapse rates of heartburn symptoms in patients with GERD; and treatment of daytime and nighttime heartburn and other symptoms associated with GERD; long-term treatment of pathological hypersecretory conditions, including Zollinger-Ellison syndrome and in combination with amoxicillin and clarithromycin to eradicate Helicobacter pylori.

The most potent suppressors of gastric acid secretion are inhibitors of the gastric H+K+-ATPase (proton pump). In typical doses, these drugs diminish the daily production of acid (basal and stimulated) by 80 to 95%. Five proton pump inhibitors are available for clinical use: omeprazole (Prilosec, Rapinex, Zegerid) and its S-isomer, esomeprazole (Nexium); lansoprazole (Prevacid), rabeprazole (Aciphex); and pantoprazole (Protonix). These drugs have different substitutions on their pyridine and / or benzimidazole groups but are remarkably similar in their pharmacological properties. Omeprazole is a racemic mixture of R- and S-isomers; the S-isomer, esomeprazole (S-omeprazole), is eliminated less rapidly than R-omeprazole, which theoretically provides a therapeutic advantage because of the increased half-life. Despite claims to the contrary, all proton pump inhibitors have equivalent efficacy at comparable doses.

Proton-pump inhibitors are prodrugs that require activation in an acid environment. After absorption into the systemic circulation, the prodrug diffuses into the parietal cells of the stomach and accumulates in the acidic secretory canaliculi. Here, it is activated by proton-catalyzed formation of a tetracyclic sulfenamide, trapping the drug so that it cannot diffuse back across the canalicular membrane. The activated form then binds covalently with sulfhydryl groups of cysteines in the H+K+-ATPase, irreversibly inactivating the pump molecule. Acid secretion resumes only after new pump molecules are synthesized and inserted into the luminal membrane, providing a prolonged (up to 24- to 48-hour) suppression of acid secretion, despite the much shorter plasma half-lives (0.5 to 2 hours) of the parent compounds. Because they block the final step in acid production, the proton-pump inhibitors are effective in acid suppression regardless of other stimulating factors.

To prevent degradation of proton-pump inhibitors by acid in the gastric lumen, oral dosage forms are supplied in different formulations: (1) enteric-coated drugs contained inside gelatin capsules (omeprazole, esomeprazole, and lansoprazole); (2) enteric-coated granules supplied as a powder for suspension (lansoprazole); (3) enteric-coated tablets (pantoprazole, rabeprazole, and omeprazole); and (4) powdered drug combined with sodium bicarbonate (omeprazole). The delayed-release and enteric-coated tablets dissolve only at alkaline pH, whereas an admixture of omeprazole with sodium bicarbonate simply neutralizes stomach acid; both strategies substantially improve the oral bioavailability of these acid-labile drugs. Until recently, the requirement for enteric coating posed a challenge to the administration of proton-pump inhibitors in patients for whom the oral route of administration is not available. These patients and those requiring immediate acid suppression now can be treated parenterally with pantoprazole or lansoprazole, both of which are approved for intravenous administration in the United States. A single intravenous bolus of 80 mg of pantoprazole inhibits acid production by 80 to 90% within an hour, and this inhibition persists for up to 21 hours, permitting once-daily dosing to achieve the desired degree of hypochlorhydria. The FDA-approved dose of intravenous pantoprazole for gastroesophageal reflux disease is 40 mg daily for up to 10 days. Higher doses (e.g., 160 to 240 mg in divided doses) are used to manage hypersecretory conditions such as the Zollinger-Ellison syndrome. The control of acid-peptic disease represents a major triumph for modern pharmacology. Proton pump inhibitors are considered superior for acid suppression in most clinically significant acid-peptic diseases, including gastroesophageal reflux disease, peptic ulcers, and nonsteroidal antiinflammatory drug (NSAID)-induced ulcers. Proton-pump inhibitors also are employed in combination with antibiotics to eradicate infection with H. pylori and thereby play a role in preventing recurrent peptic ulcers. These agents largely have replaced the use of misoprostol and sucralfate, although the latter still is a low-cost alternative for prophylaxis against stress ulcers. The delay in maximal inhibition of acid secretion with the proton-pump inhibitors (3 to 5 days) makes them less suited for use on an as-needed basis for symptom relief. In this setting, H2-receptor antagonists, though less effective than proton pump inhibitors in suppressing acid secretion, have a more rapid onset of action that makes them useful for patient-directed management of mild or infrequent symptoms.