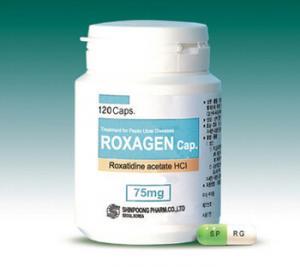 Stability. The stability of roxatidine acetate hydrochloride in parenteral nutrition solutions was influenced by storage temperature and amino acid content and composition.

Unlike cimetidine roxatidine does not appear to affect cytochrome P450, and therefore is considered to have little effect on the metabolism of other drugs. However, like other H2-antagonists its effects on gastric pH may alter the absorption of some other drugs.

Roxatidine acetate hydrochloride is rapidly and almost completely absorbed from the gastrointestinal tract with peak concentrations in plasma occurring about 1 to 3 hours after doses by mouth. It is rapidly hydrolysed to the active desacetyl metabolite, roxatidine, by esterases in the liver, small intestine, and serum. Over 90% of a dose is excreted in the urine as roxatidine and other metabolites. The elimination half-life of roxatidine is about 6 hours and is prolonged in renal impairment. Small amounts of roxatidine have been reported to be distributed into breast milk.

When used as a pre-anaesthetic medication, an oral dose of roxatidine acetate hydrochloride 75 mg is given in the evening on the day before surgery and repeated 2 hours before the induction of anaesthesia alternatively a single dose of 150 mg may be given the night before surgery.

Roxatidine acetate hydrochloride may also be given intravenously for the treatment of upper gastrointestinal tract haemorrhage in a dose of 75 mg twice daily by slow intravenous injection or by intravenous infusion. For dosage in renal impairment, see below.

However, results in 6 patients with chronic renal failure and CC less than 20 mL/minute indicated that giving the recommended dose of roxatidine acetate hydrochloride, 75 mg every other day, was inadequate to maintain gastric pH above 4 for more than 6 hours. Subsequent study in 8 patients showed that a dose of 75 mg daily was well tolerated and effective.