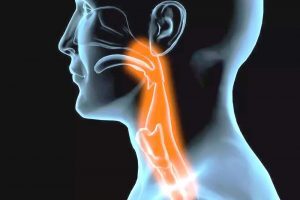 Differentiation of the major causes of dysphagia can be facilitated by eliciting the history on several critical points: consistency of the food causing symptoms, localization and duration of dysphagia, and presence of associated symptoms such as odynophagia, heartburn, cough, and weight loss.

Consistency of foods causing dysphagia. As mentioned before, a motility disorder usually causes dysphagia to both liquids and solids from the onset of the symptoms, whereas a structural disorder causes dysphagia to solids first and, if the lesion further compromises the esophageal lumen, progressively to semisolids and liquids.

The duration and constancy of the symptoms are also diagnostically pertinent. Intermittent dysphagia for solid foods only is typical of lower esophageal (Schatzki) ring. A patient with a long history of heartburn may notice its disappearance when a stricture develops, which may cause dysphagia, especially to solids. The patient with esophageal cancer typically has a more accelerated course of progressive dysphagia over several months, usually accompanied by weight loss and anorexia.

The possible presence of neurologic, muscular, connective tissue, or other systemic disorders and the use of drugs that may affect striated or smooth-muscle function of the esophagus should be determined.

The physical examination may be indirectly helpful in the diagnosis of dysphagia related to another disease such as a central nervous system, muscular, endocrine-metabolic, or connective tissue disorder. The presence of pharyngeal inflammation, a mass in the neck, an enlarged thyroid, a deviated trachea, cardiomegaly, or an epigastric mass may also be helpful in reaching the diagnosis.

The chest x-ray may be helpful indirectly in the diagnosis of the cause of dysphagia. In advanced achalasia with dilatation of the esophagus, patients may have a widened mediastinal shadow with an air-fluid level made up of food and secretions held up by the tight lower esophageal sphincter. Mediastinal masses or cardiomegaly with chamber enlargement may also be evident on a chest x-ray.

Barium swallow, cine-esophagogram, and upper gastrointestinal series are usually the first specific diagnostic studies performed in the workup of dysphagia. The patient is asked to swallow liquid barium or a piece of bread dipped in barium. The movement of the bolus is then observed by the radiologist fluoroscopically and recorded on x-ray film or videotape (cineradiography). In this way, the course of the bolus is followed from the mouth to the stomach.

The barium study is less helpful in the diagnosis of motility disorders. However, in achalasia one may see a dilated esophagus with a «parrot beak» narrowing at the gastroesophageal junction. Tertiary or corkscrew contractions may suggest the diagnosis of diffuse esophageal spasm; however, this may be a normal finding, especially in elderly patients.

Upper gastrointestinal endoscopy. The direct visualization of the mucosa and lumen of the esophagus, stomach, and proximal duodenum is possible with flexible panendoscopes. Structural and inflammatory lesions may be directly examined, and biopsies and cytologic specimens may be obtained. Intramural lesions such as leiomyomas may also be seen. Biopsies of these lesions are not recommended, since the scarred overlying mucosa may adhere to the movable tumor and prevent its easy surgical enucleation. Submucosal tumors may be examined using endoscopic ultrasonography.

Esophageal manometry is recommended when an esophageal motility disorder is suspected. In this test, intraesophageal pressures and peristaltic activity are recorded as a function of time with wet and dry swallows. This test yields information about the lower and upper esophageal sphincter function and the nature of the peristaltic wave.

The typical manometry tube consists of soft, flexible tubing that has three recording sensors arranged linearly 5 cm apart from one another in a spiral fashion at the distal end. The patient is asked to swallow the tube, which is then advanced into the stomach. As the tube is gradually withdrawn, each sensor passes through the lower esophageal sphincter, measuring its pressure. In the body of the esophagus, the peristaltic waves are recorded in a sequential manner as they progress down the esophagus, first with the proximal sensor, next with the middle, and last with the distal sensor. If peristalsis is progressive, this normal sequence is observed. If simultaneous, repetitive contractions are noted, their amplitude and duration will help in establishing the type of motility disorder. When the middle or distal sensor lies within the lower esophageal sphincter, the relationship between esophageal peristaltic contractions and sphincter relaxation can be observed. Similarly, when the upper sensor lies in the upper esophageal sphincter, the relationship between pharyngeal contractions and upper esophageal sphincter relaxation can be recorded. In patients with achalasia, a careful examination of the distal esophagus and gastroesophageal junction is essential to rule out malignancy. Even benign appearing strictures should be biopsied and brushed to look for malignant cells. Endoscopic ultrasonography may help in evaluation of strictures and give information on the extent of tissue involvement with malignant infiltration. Evaluation of the stomach and duodenum may be helpful in eliminating diseases of these organs that may coexist or give symptoms that may be confused with those of esophageal disorders.