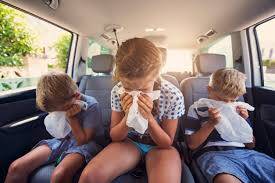 Motion sickness is thought to be caused by a conflict of messages to the brain, where the vomiting centre receives information from the eyes, the Gastrointestinal tract and the vestibular system in the ear. Symptoms of motion sickness include nausea and sometimes vomiting, pallor and cold sweats. Parents commonly seek advice about how to prevent motion sickness in children, in whom the problem is most common. Any form of travel can produce symptoms, including air, sea and road. Effective prophylactic treatments are available over the counter and can be selected to match the patient’s needs.

What you need to know

Significance of questions and answers

Motion sickness is common in young children. Babies and very young children up to 2 years seem to only rarely suffer from the problem and therefore do not usually require treatment. The incidence of motion sickness seems to greatly reduce with age, although some adults still experience symptoms. The minimum age at which products designed to prevent motion sickness can be given varies, so for a family with several children careful product selection can provide one medicine to treat all cases.

The pharmacist should ascertain which members of the family have previously experienced motion sickness and for whom treatment will be needed.

Mode of travel/length of journey

Details of the journey to be undertaken are useful. The estimated length of time to be spent travelling will help the pharmacist in the selection of prophylactic treatment, since the length of action of available drugs varies.

Once vomiting starts there is little that can be done, so any medicine recommended by the pharmacist must be taken in good time before the journey if it is to be effective. The fact that it is important that the symptoms are prevented before they can gain a hold should be emphasised to the parents. If it is a long journey, it may be necessary to repeat the dose while travelling and the recommended dosage interval should be stressed.

The pharmacist can also offer useful general advice about reducing motion sickness according to the method of transport to be used. For example, children are less likely to feel or be sick if they can see out of the car, so appropriate seats can be used to elevate the seating position of small children. This seems to be effective in practice and is thought to be because it allows the child to see relatively still objects outside the car. This ability to focus on such objects may help to settle the brain’s receipt of conflicting messages.

For any method of travel, children are less likely to experience symptoms if they are kept occupied by playing games as they are therefore concentrating on something else. However, again, it seems that looking outside at still objects remains helpful and that a simple game, e.g. ‘I spy’, is better than reading in this respect. In fact, for many travel sickness sufferers, reading exacerbates the feeling of nausea.

In addition to checking any prescription or over the counter medicines currently being taken, the pharmacist should also enquire about any treatments used in the past for motion sickness and their level of success or failure.

Prophylactic treatments for motion sickness, which can be bought over the counter, are effective and there is usually no need to refer patients to the doctor.

The only anticholinergic used widely in the prevention of motion sickness is hyoscine hydrobromide, which can be given to children over 3 years. Anticholinergic drugs can cause drowsiness, blurred vision, dry mouth, constipation and urinary retention as side-effects, although they are probably unlikely to do so at the doses used in over the counter formulations for motion sickness. Children could be given sweets to suck to counteract any drying of the mouth.

Hyoscine has a short duration of action (from 1 to 3 h). It is therefore suitable for shorter journeys and should be given 20 min before the start of the journey. Anticholinergic drugs and antihistamines with anticholinergic effects are best avoided in patients with prostatic hypertrophy because of the possibility of urinary retention and in glaucoma because the intraocular pressure might be increased.

Pharmacists should remember that side-effects from anticholinergic agents are additive and may be increased in patients already taking drugs with anticholinergic effects, such as tricyclic antidepressants (e.g. amitriptyline), butyrophenones (e.g. haloperidol) and phenothiazines (e.g. chlorpromazine). It is therefore important for the pharmacist to determine the identity of any medicines currently being taken by the patient. Table Treatments for motion sickness summarises recommended doses and length of action for the treatments discussed.

Ginger has been used for many years for travel sickness. Clinical trials have produced conflicting findings in travel sickness. No mechanism of action has been identified, but it has been suggested that ginger acts on the Gastrointestinal tract itself rather than on the vomiting centre in the brain or on the vestibular system. No official dosage level has been suggested, but several proprietary products containing ginger are available. Ginger would be worth trying for a driver who suffered from motion sickness, since it does not cause drowsiness, and might be worth considering for use in pregnant women, for whom other antiemetics such as anticholinergics and antihistamines are not recommended. Ginger has been shown to be effective in a research trial in nausea and vomiting associated with pregnancy. 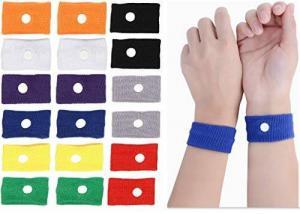 Elasticated wristbands that apply pressure to a defined point on the inside of the wrists are available. Evidence of effectiveness is equivocal. Such wristbands might be worth trying for drivers or pregnant women.