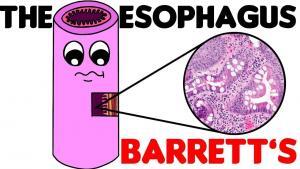 Barrett’s esophagus — A change in cell shape of the epithelial lining to columnar; associated with increased incidence of esophageal adenocarcinoma

Bernstein test — A provocative test in which acid is infused into the lower esophagus, followed by a salt solution (saline control). If symptoms appear following the acid and then disappear when the salt is added, a problem with acid reflux is indicated

Endoscopy — Use of a flexible tube inserted into the esophagus to directly visualize the lining for presence of esophagitis; considered the only reliable method for diagnosing Barrett’s esophagus; allows for tissue samples to be taken for biopsy

Erosive esophagitis — A more severe form of esophagitis in which the integrity of the mucosa is compromised; can lead to ulceration; may cause further complications

Esophagitis — Inflammation of the esophagus due to excessive acid reflux; classified according to severity as grades I–IV

Manometry — Measurement of pressures within the esophagus

Esophagitis: Esophagitis (inflammation of the esophagus) results from excessive reflux of gastric juice rather than excessive acid secretion. The epithelium of the esophagus is intolerant to repetitive exposure to gastric juice for prolonged periods. Esophagitis is classified according to severity (grades I–IV); low-grade esophagitis (grade I) is evident only by histopathological examination, whereas high-grade changes (grade IV) can be seen endoscopically. Erosive esophagitis can lead to ulceration (2%–7%). In the ensuing repair process, esophageal strictures (4%–20%) and Barrett’s esophagus (10%–15%) can develop. Hemorrhage (<2%) can also result from erosive esophagitis and can be life-threatening.

Esophageal Stricture: Characterized by narrowing of the esophagus, esophageal stricture leads to injury and scarring of the lower esophagus. Presenting complaints of stricture include dysphagia, odynophagia (pain on swallowing), and food impaction.

Often a thorough history will reveal symptoms consistent with complicated or uncomplicated gastroesophageal reflux disease (GERD). In patients with typical symptoms, such as heartburn, that are relieved by antacids, no further diagnostic testing may be necessary before initiating empiric therapy. However, for a poorly responsive patient in whom the diagnosis is unclear, for patients over 45 years of age, and for those with alarming symptoms, further definitive evaluations should be performed in order to exclude malignancy and assess the severity of esophagitis, if present.

Endoscopy, in which a small, lighted flexible tube is inserted through the sedated patient’s mouth into the esophagus and stomach, is the investigation of choice for many clinicians because it provides direct visualization of the esophageal mucosa. This inspection of the mucosa offers the opportunity to perform a biopsy and facilitates the diagnosis of esophageal carcinoma, Barrett’s esophagus or other mucosal damage. Indications for endoscopy include dysphagia, bleeding, chronic symptoms, atypical symptoms or refractory symptoms.

Because of specific histological changes attributable to GERD, an endoscopic biopsy is the most appropriate test for the diagnosis of esophagitis. Single barium swallow studies are not very accurate in the diagnosis of gastroesophageal reflux disease but may be a good preliminary study to diagnose luminal narrowing in patients with dysphagia. Because normal findings on endoscopy or biopsy do not exclude symptomatic GERD, a diagnostic test to evaluate acid exposure may be an important component of the evaluation. Ambulatory pH monitoring, in which the patient wears a small recording device while performing usual activities, is helpful in detecting the presence and amount of acid reflux. This procedure should be considered (1) in GERD patients whose response to therapy is poor, (2) in patients with atypical symptoms, and (3) when endoscopy is negative. It is also helpful in assessing patients pre- and post-operatively.

Atypical symptoms, with or without the usual symptoms of gastroesophageal reflux disease, must be differentiated from other disease states such as peptic ulcer disease, cardiac conditions and asthma. Esophageal disorders are a common cause of noncardiac chest pain, with GERD being one of the most frequent findings. Approximately 50% of patients with a history of anginal chest pain and normal coronary arteries, when studied using ambulatory esophageal 24-hour pH monitoring, showed evidence of esophageal dysfunction.

There appears to be an association between GERD and respiratory problems such as asthma and bronchitis. Reflux-induced asthma may result from either aspiration of gastric contents, with consequent bronchospasm, or activation of vagal reflex leading to bronchoconstriction. Therefore, patients with nocturnal cough or asthma with reflux symptoms should be evaluated for gastroesophageal reflux disease to determine if the syndrome is the causative factor. Hoarseness secondary to vocal cord edema and/or inflammation may also be associated with GERD; patients with these symptoms also should be evaluated.