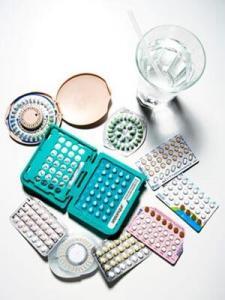 Before hormonal contraceptives are given, the woman should undergo an appropriate medical examination and her medical history should be carefully evaluated. Regular examination is recommended during use. The contraceptive effectiveness of combined and progestogen-only preparations may be reduced during episodes of vomiting or diarrhoea and extra contraceptive measures may be necessary during and for 7 days after recovery. For precautions to be taken if a ‘pill’ is missed, see Uses and Administration, below.

Combined oral contraceptives are contra-indicated in women with markedly impaired liver function or cholestasis, the Dubin-Johnson or Rotor syndromes, hepatic adenoma, oestrogen-dependent neoplasms such as breast or endometrial cancer, cardiovascular disease (see also below) including previous or current thromboembolic disorders or high risk of them, and arterial disease or multiple risk factors for it, disorders of lipid metabolism, undiagnosed vaginal bleeding, possible pregnancy, or a history during pregnancy of pruritus or cholestatic jaundice, chorea, herpes gestationis, pemphigoid gestationis, or deteriorating otosclerosis. They are also contra-indicated in severe or focal migraine (or where there are other risk factors for cardiovascular disease) and should be used with caution in other forms of migraine (for further details, see below). They should be given with caution to women with a history of clinical depression, gallbladder disease, sickle-cell disease, or conditions influenced by fluid retention. Oral contraceptive absorption, and hence efficacy, may be reduced in women with inflammatory bowel disease when there is small bowel involvement or malabsorption. They should also be used with caution in those with varicose veins (and should be avoided where the restrictions outlined under Venous Thromboembolism apply, see Cardiovascular Disease, below). Where not actually contra-indicated, they should also be used with caution in those with a risk factor for cardiovascular disease such as diabetes mellitus, smoking, obesity, hypertension, or a family history of cardiovascular disorders (see also below). Current opinion is that low-dose combined oral contraceptives may be used in women over the age of 3 5 years provided they do not smoke and have no other risk factors for cardiovascular disease, but that they should be avoided over the age of 50 years. Use by those undergoing surgery or prolonged bed rest may increase the risk of thromboembolic episodes and it is generally recommended that combined oral contraceptives should be stopped 4 weeks before major elective surgery (but see also below). Combined oral contraceptives should not be used after recent evacuation of a hydatidiform mole until urine and plasma gonadotrophin concentrations have returned to normal. Contact lenses may irritate. The use of combined oral contraceptives may influence the results of certain laboratory tests including liver, thyroid, adrenal, and renal-function tests, plasma concentrations of binding proteins and lipid/lipoprotein fractions, and fibrinolysis and coagulation parameters.

Combined oral contraceptives should be stopped immediately, and appropriate investigations and treatment carried out, if any of the following occur:

• unusual, severe, prolonged headache, sudden disturbances of vision or hearing or other perceptual disorders, collapse, marked numbness or weakness affecting one side of the body, or other signs or symptoms suggestive of cerebrovascular accident

• clear exacerbation of other conditions known to be capable of deteriorating during oral contraception or pregnancy.

Progestogen-only contraceptives, whether oral or injectable, may be used when oestrogen-containing preparations are contra-indicated but certain contra-indications and precautions must still be observed. They are contra-indicated in women with undiagnosed vaginal bleeding, possible pregnancy, severe arterial disease, hormone-dependent neoplasms, and severe liver disease such as hepatic adenoma.

Combined oral contraceptives can reduce the volume of breast milk and are therefore avoided in breast-feeding women for the first 6 weeks after birth. In general, they are not recommended for 6 months or until weaning, but some suggest that they may be considered between 6 weeks and 6 months postpartum if breast feeding is established and other contraceptive methods are unacceptable.

Very small amounts of oestrogens and progestogens from hormonal contraceptives are distributed into breast milk, but there is no indication that this adversely affects development of the breast-fed infant. The American Academy of Pediatrics has also reviewed the use of hormonal contraceptives during lactation, commenting that early information was based on the use of high-dose contraceptives. It was noted that there might be a decrease in milk production, but that there was insufficient information to confirm that there was any alteration in the composition of breast milk, and that although there had been rare cases of gynaecomastia in breast-fed infants of mothers who received high-dose contraceptives, there was no consistent evidence of long-term adverse effects on the infant. A later study of 48 children whose mothers had received high-dose combined oral contraceptives during breast feeding found no effect on these children compared with controls, up to 8 years of age. The Academy therefore considers that combined oral contraceptives are usually compatible with breast feeding.

Breast feeding itself suppresses ovulation and can be used, if started immediately postpartum, as the lactational amenorrhoea method of contraception for further details, see Contraception.

• smoking (avoid if 40 or more cigarettes are smoked daily)

• migraine, see under Migraine, below.

• family history of venous thromboembolism in first-degree relative aged under 45 years (avoid if there is a known prothrombotic coagulation abnormality such as antiphospholipid antibodies, which may occur in patients with SLE, or factor V Leiden)

The BNF also advises that women taking combined oral contraceptives may be at an increased risk of deep-vein thrombosis during travel involving prolonged periods of immobility (over 5 hours). The risk may be reduced by appropriate exercise during the journey, and possibly by wearing graduated compression hosiery.

In the light of evidence indicating an increased risk of venous thromboembolism with combined oral contraceptives containing desogestrel or gestodene (see Venous Thromboembolism, under Effects on the Cardiovascular System, above), the UK CSM advised additional precautions for these products. As well as the usual precautions, it was initially advised they should not be used by obese women (body-mass index greater than 30 kg/m), those with varicose veins, or those with a history of thrombosis of any cause. Moreover, it was also recommended that they should be used only by women who were intolerant of other combined oral contraceptives and who were prepared to accept an increased risk of venous thromboembolism. Subsequently the CSM modified its advice as follows: they recommended that these products should be avoided in women with known risk factors for venous thromboembolism. However, in women without contra-indications, the type of combined contraceptive was considered a matter of clinical judgement and personal choice, as long as the woman was fully informed of the small excess risk associated with desogestrel- and gestodene-containing products.

Lupus erythematosus. SLE is an auto-immune disease that is far more common in women than in men, and usually has a peak onset for women in their 20s and 30s. There is some evidence to suggest that oral contraceptive use may be associated with a slightly increased risk in the onset of SLE. There are also reports and studies of the effect of contraceptives on disease exacerbation, although there has been an apparent reduction in reports which has coincided with the lowering of oestrogen content in contraceptive preparations. More recently, controlled studies’ have found that disease activity and flares over 12 months in women with stable SLE were similar whether they were given a combined oral contraceptive (containing ethinylestradiol 30 or 35 micrograms), a progestogen-only oral preparation, placebo, or copper IUD. However, patients with major disease, such as lupus nephritis, could be at greater risk of exacerbation. It is also generally advised that combined oral contraceptives should be avoided in women with antiphospholipid antibodies (which includes about a third of all patients with SLE) because they are at increased risk of venous thromboembolism.

• migraine treated with an ergot derivative

It also recommends caution in migraine without focal aura and migraine controlled with a serotonin (5-HT1) agonist. A woman receiving a combined oral contraceptive should report any increase in headache frequency or the onset of focal symptoms. If focal neurological symptoms not typical of aura persist for longer than one hour the combined oral contraceptive should be discontinued and the woman referred urgently to a neurologist. Other risk factors for arterial disease should also be considered in women with a history of migraine (see Cardiovascular Disease, above).

Obesity. It has been suggested that higher body-weight or BMI might be associated with a greater risk of oral contraceptive failure. A number of cohort and case-control studies have evaluated this association, with mixed results that may have been confounded by recall bias, inaccuracy of reported body-weight, non-compliance, and change in oestrogen dose over time. Some studies have suggested that there is an increased risk of contraceptive failure, while others have found no association. In addition, some have found a weak association that was no longer statistically significant when results were adjusted for confounders such as education, income, and ethnicity. It is therefore unclear whether an association exists, but obesity is a risk factor for cardiovascular disease and combined oral contraceptives should be used with caution, or avoided, in these women (see Cardiovascular Disease, above).

Porphyria. Oral contraceptives have been associated with acute attacks of porphyria and are considered unsafe in porphyric patients. The progestogen content is considered more hazardous than the oestrogen content. A progestogen-only contraceptive may be used with extreme caution if non-hormonal contraception is inappropriate and potential benefit outweighs the risk. The risk of an acute attack is greatest in women who have had a previous attack or are under 30 years of age. Long-acting progestogen preparations should never be used in those at risk.

Pregnancy. In contrast to the numerous cases of congenital malformations reported after the use of high doses of sex hormones for hormonal pregnancy tests, there have been only a few suggestions that continued use of oral contraceptives during early pregnancy may result in congenital limb reduction deformities, and one case of neonatal choreoathetosis after prenatal exposure to oral contraceptives.

Depot intramuscular medroxyprogesterone acetate is a highly effective contraceptive, but failures do occur rarely. A review of such failures had limited data on birth outcome in 100 women who continued the pregnancy, but no abnormalities or fetal anomalies were reported.

In 25 pregnancies that were continued after the failure of levonorgestrel-based emergency contraception, there was 1 case of gastro-oesophageal reflux requiring medical treatment and 1 case of nasolachrymal duct obstruction that was surgically drained, but compared with a control group and expected baseline risk there was no increased risk of congenital or genital abnormalities.

For a discussion of the ectopic pregnancy risk in users of hormonal contraceptives, see above.

Travel. For a warning that women taking oral contraceptives may be at increased risk of deep-vein thrombosis from travel involving prolonged immobility see Cardiovascular Disease, above.