Diet and nutrition. Patients with mild symptomatic Inflammatory bowel disease usually are able to take food orally. The diet should be nutritious. Traditionally, fiber has been restricted during periods of active symptoms. Some patients cannot tolerate milk, which may or may not be related to lactase deficiency. Patients with Crohn’s disease who have terminal ileal involvement and steatorrhea may require supplemental fat-soluble vitamins, medium-chain triglycerides, and parenteral vitamin B12. Replacement iron may be indicated in patients who are iron-deficient. Patients in remission do not require any restriction of fiber or other dietary constituent except as dictated by his or her own experience.

Drugs. Because the etiology of Inflammatory bowel disease is incompletely understood, drug treatment is aimed at alleviating and reducing inflammation. 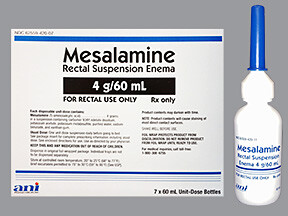 Sulfasalazine and aminosalicylates (mesalamines) (Table SULFASALAZINE AND 5-Aspirin (MESALAMINE) PREPARATIONS). Sulfasalazine (Azulfidine) has historically been the most commonly used drug in the treatment of Inflammatory bowel disease. It has been show to be efficacious in active and remitted ulcerative colitis and inactive Crohn’s disease when the colon is involved. The drug consists of sulfapyridine linked to 5-aminosalicylic acid (5-Aspirin or mesalamine) via an azo bond. Intestinal bacteria break the azo bond and release the two components. The sulfapyridine moiety is systemically absorbed and excreted in the urine and the 5-Aspirin moiety, the active component, stays in the intestinal lumen in contact with the mucosa and eventually is excreted in the feces.

Side effects. Abdominal discomfort is common and is attributed to the effects of the salicylate portion of the drug on the upper gastrointestinal tract. This problem is minimized by ingestion of the sulfasalazine after eating. Patients also may become folate-deficient because of competition between folate and sulfasalazine for absorption. Other side effects, such as skin eruptions and bone marrow suppression, are less common and are attributed to the sulfa portion.

Dosage. The initial daily dose is low (1 g) to minimize gastrointestinal side effects. A therapeutic dose of 3 to 4 g per day is appropriate. A complete blood count and liver chemistry tests should be obtained before starting therapy, every 1 to 3 months initially, and every 6 to 12 months during long-term treatment.

Maintenance treatment with sulfasalazine has been shown to reduce the frequency of exacerbations of ulcerative colitis. The usual maintenance dosage is 2 to 3 g per day in divided doses, although an occasional patient may benefit from 1 g per day (i.e., 500 mg twice daily).

Other 5-Aspirin (mesalamine) preparations. Because the serious side effects of sulfasalazine are related to the sulfa portion, there has been much interest in developing similar drugs that retain the salicylate portion but replace the sulfapyridine. Several oral 5-Aspirin preparations are available. Olsalazine (Dipentum), which consists of two 5-Aspirin molecules joined by an azo bond such as sulfasalazine, requires bacterial degradation in the colon. It is as effective against active ulcerative colitis and in maintaining remission.

Asacol is a controlled-release tablet form of 5-Aspirin, which is encapsulated by an acrylic resin that dissolves at a pH higher than 6.0. It has been shown to be effective in both active and remitted ulcerative colitis and Crohn’s disease, especially when the ileum is involved.

Pentasa is a controlled-release formulation of 5-Aspirin that is encapsulated in ethylcellulose microgranules. It is effective in active and remitted ulcerative colitis and in active Crohn’s disease regardless of disease location. Pentasa appears to help in maintaining remission in both small-bowel and colonic Crohn’s disease.

Corticosteroids. Historically, corticosteroids have been used in patients with severe ulcerative colitis or Crohn’s disease to induce a remission. Intravenous (intravenous) steroids (i.e. hydrocortisone 100 mg intravenous q6h or methylprednisolone 10-20 mg intravenous every 6 to 8 hours) are usually used in such patients. When patients can take oral medications, prednisone at doses of 40 to 60 mg per day is usually given. If symptoms improve, the drug is tapered and withdrawn over a period of several months. Steroids are not recommended for maintenance therapy of ulcerative colitis or Crohn’s disease, because steroids do not prevent relapse of Crohn’s disease or ulcerative colitis and they have major side effects. However, many patients become steroid dependent and experience recurrence of symptoms when the dose of prednisone is reduced to less than 15 mg per day. One strategy is to use azathioprine,6-mercapopurine (6-MP), or azathioprine (Imuran) for steroid-dependent patients to help to taper them off steroids.

Several corticosteroid enema preparations are available for the treatment of proctitis and distal colitis. These are usually administered once or twice a day.

Antibiotics. Most patients with mild-to-moderate Inflammatory bowel disease are successfully maintained on therapy with either sulfasalazine or 5-Aspirin and occasionally may require systemic or topical steroid therapy to treat disease relapses. However, about 20% to 25% of patients with ulcerative colitis and one third of patients with Crohn’s disease require additional therapy for refractory disease, steroid dependency, and fistulas. Bacteria is known to play an important role in the pathogenesis of Crohn’s disease and it may play a role in ulcerative colitis. In Crohn’s diseases, the indications for the use of antibiotics include perianal disease, localized peritonitis due to microperforation, bacterial overgrowth secondary to a chronic stricture, and as an adjunct to drainage therapy for abscesses and fistulas. Antibiotics should be considered in patients not responding to 5-Aspirin preparations prior to initiating of corticosteroid therapy.

Metronidazole plus ciprofloxacin hydrochloride in combination has been used in the treatment of active, refractory Crohn’s disease. In a comparison trial with steroids, the remission rate was similar. This combination may also be used in ulcerative colitis. 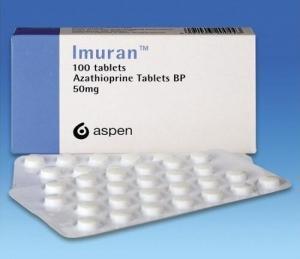 Methotrexate (1.5-7.5 mg per week by mouth [p.o.] or 25 mg per week intramuscular [intramuscular]) has been effective in the treatment of refractory and steroid-dependent Crohn’s disease but not in ulcerative colitis. Its effect on remission maintenance is not clear. Clinical response is rapid (2-8 weeks). Liver biopsy may be helpful prior to starting therapy in patients with liver chemistry abnormalities to monitor adverse effects. Monthly monitoring for bone marrow and hepatic toxicity is required: If cytopenias occur, methotrexate should be withheld for 2 to 3 weeks then restarted at a lower dose. Liver biopsy should be performed after every 1,500 mg of methotrexate administered. A minority of patients develops pulmonary fibrosis.

Cyclosporin (Neoral Sandimmune) (4 mg/kg per day intravenous; therapeutic range 250-350 mg/mL) has been used successfully in severe steroid refractory ulcerative colitis as a bridge therapy to either long-term immunomodulatory therapy (i.e., with Imuran or 6-MP) or definitive colectomy (e.g. in pregnant or young patients in whom immediate surgery is not optimal.) However, while the short-term response rates are impressive, over half of these patients must undergo colectomy during 6 months of follow-up. In patients with Crohn’s disease, cyclosporin has not been consistently effective.

Only cyclosporin at low doses ( 5mg/kg per day) is not efficacious in Inflammatory bowel disease. Higher doses (8-10mg/kg per day) of cyclosporin may be more effective, however, the side-effect profile (hypertension, and nephro- and bone marrow toxicities) limits its usefulness. Cyclosporin should not be used for remission maintenance for ulcerative colitis or Crohn’s disease.

Clinical response in patients who respond to cyclosporin therapy is rapid (within 2 weeks). The total duration of therapy should not exceed 4 to 6 months. Monitoring of nephrotoxicity is required. The dose should be adjusted downward whenever the baseline serum creatinine level increases by 30%.

Infliximab (Remicade) is a chimeric monoclonal antibody to human tumor necrosis factor-2 (tumor necrosis factor-2), a proinflammatory cytokine that plays an important role in the pathogenesis of Crohn’s disease. Controlled trials have demonstrated high efficacy for infliximab in moderate to severely active Crohn’s disease and in fistulizing Crohn’s disease with sufficient evidence for its safety. Preliminary studies suggest that it may also be of benefit in severe ulcerative colitis. Clinical response is rapid (within 1-2 weeks) and the duration of response ranges from 8 to 12 weeks per infusion. Infliximab has probably supplanted the role of cyclosporin and corticosteroids in Crohn’s disease. Infliximab is administered intravenous (5mg/kg) over 2 hours. Infusions for active or fistulizing Crohn’s disease are given as three doses at 0, 2, and 6 weeks. Infusion reactions may be minimized by pretreatment with an antihistamine and a steroid preparation. To minimize symptomatic disease recurrance, the infusions are repeated at 8 week intervals.

Toxicities observed for infliximab therapy included formation of human antichimeric antibodies, autoantibodies and a serum sickness-like delayed hypersensitivity reaction in some patients 2 to 4 years after initial treatment. The risk of development of lymphoma in treated patients is not clear. Further studies are under way to clarify the role of long-term use of infliximab in Inflammatory bowel disease. It is advisable to continue the use of 5-Aspirin, antibiotic, and other immune modularly therapy during and after infusions of infliximab.

Thalidomide has shown anti-tumor necrosis factor activity in a subset of patients with Crohn’s disease; however, due to its highly teratogenic potential, it is not suitable for routine use.

Nicotine given in enema form has shown some benefit in patients with distal ulcerative colitis but due to its side-effect profile, it is not widely used.

Antidiarrheal medications. If diarrhea does not improve with the previously described medical therapy in patients with mild-to-moderate Inflammatory bowel disease, treatment with an antidiarrheal drug may be helpful. Codeine is most effective, although loperamide (Imodium) or diphenoxylate (Lomotil) may be preferred because of their lower addictive potential. These and other opiate derivatives should not be used in patients with severe Inflammatory bowel disease because of the possibility of inducing toxic megacolon.

Bile acid-binding resins and medium-chain triglycerides. Because many patients with Crohn’s disease have involvement of the terminal ileum with consequent bile acid malabsorption, diarrhea, and steatorrhea, treatment with a bile acid-binding resin such as cholestyramine or with medium-chain triglyceride supplements may be indicated in addition to other antidiarrheal drugs.

Psychotherapy. Formal psychotherapy appears to be of little benefit in the primary treatment of Inflammatory bowel disease. However, emotional support of the patient by the physician, family, clergy, and other concerned people is important. Psychotherapy may be indicated in some patients to help them cope with living with a chronic disease.

Ulcerative colitis. The standard noncontroversial indications for surgery in ulcerative colitis include toxic megacolon perforation, abscess, uncontrollable hemorrhage, unrelieved obstruction, fulminating disease, carcinoma, and high-grade carcinoma on colonic biopsies. Usually a total proctocolectomy is performed. Historically, this operation has been accompanied by a permanent ileostomy. Currently rectal sphincter-saving operations are the norm. In this operation, the rectal mucosa is removed, but the muscular wall of the rectum is left intact. The terminal ileum is anastomosed to the anus, usually with the formation of a reservoir pouch. If the operation is performed in an acutely ill patient with severe colitis, it is usually carried out in two steps: the colectomy first and the reanastomosis several months later.

Despite increased surgical experience and patient appeal, problems with the ileal pouch-anal anastomosis remain. Technical failure occurs in approximately 5% to 8% of patients within the first 5 to 10 years. Pouchitis occurs acutely in 40% to 50% of patients. Most of these patients respond to a course of antibiotic therapy with metronidazole or ciprofloxacin hydrochloride, or both. Approximately 5% to 8% will develop chronic pouchitis and require maintenance suppressive therapy or possible pouch takedown and formation of a permanent ileostomy. There are reports of the development of neoplasia in the pouch after a number of years.

The recurrence rate after surgery of Crohn’s disease is high: 30% after 5 years, 50% after 10 years, and 70% after 15 years. Whether this is because of some deleterious effect of surgery on the bowel or merely represents the natural history of patients with severe Crohn’s disease is difficult to determine. In any event, the aim of surgery is to remove grossly diseased bowel and preserve as much normal-appearing bowel as possible. If the terminal ileum has been removed, the patient should undergo a Schilling test 3 to 6 months after surgery to survey for vitamin B12 malabsorption. Most patients will require monthly vitamin B12 injections.

Fistulas often respond to medical treatment, and even those that persist do not always require surgery. However, enterocutaneous fistulas that are poorly tolerated by the patient and all enterovesical fistulas require surgical correction. Also, fistulas between loops of bowel should be corrected surgically if clinically significant malabsorption occurs.