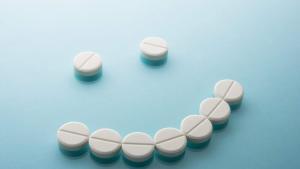 Antidepressants were initially used for patients with irritable bowel syndrome (IBS) who reported significant depressive symptoms. Because it has been shown that antidepressants are useful in the treatment of pain due to neuromodulatory and analgesic properties, the use of these agents for IBS may be considered for patients with less severe symptoms. A recent meta-analysis concluded that tricyclic antidepressants (e.g., amitriptyline, desipramine) were generally more effective than placebo in the treatment of irritable bowel syndrome (IBS). Another review of seven trials with tricyclic antidepressants (TCAs) reported that the agents improved abdominal pain and diarrhea in IBS patients. Although no randomized trials have been performed with selective serotonin reuptake inhibitors (SSRIs), they are commonly given because of their low side effect profile in comparison to TCAs. Tricyclic antidepressants tend to increase gastrointestinal (GI) transit time because of anticholinergic activity, and may be appropriate for patients with diarrhea-predominant IBS, whereas SSRIs may decrease transit time.

The therapeutic effect of antidepressants for irritable bowel syndrome (IBS) is achieved sooner and at a lower dosage than in the standard treatment of depression. A trial of three to four weeks is recommended to evaluate efficacy, and responsive patients should be treated for 3 to 12 months before tapering the dose. Because antidepressants are ineffective when used “as needed,” use is reserved for patients with chronic symptoms. Adverse events seen with TCAs include dry mouth, sedation, constipation, blurred vision, and cardiovascular effects. The SSRIs may cause nausea, diarrhea, headache, insomnia, or drowsiness.