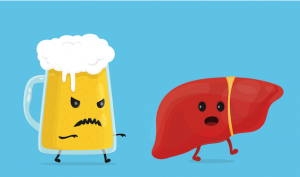 The association of alcohol abuse and liver damage has been known since the time of the ancient Greeks. The availability of alcoholic beverages, licensing laws, and economic, cultural, and environmental conditions all influence both per capita alcohol consumption and mortality from alcohol- related liver disease. Alcoholism is, in part, inherited, and aberrant alcohol-drinking behavior is genetically influenced. The risk factors that may affect the susceptibility to development of alcoholic liver disease include genetic factors, malnutrition, female gender, and viral agents (hepatitis virus B, C, and D).

Ninety to ninety-five percent of people with chronic alcohol consumption develop fatty liver. In almost all instances, this lesion is thought to be reversible on cessation of alcohol intake. A minority of individuals goes on to perivenular sclerosis (collagen deposition in and around central veins). Ten to thirty-five percent of chronic alcoholics, however, have acute liver injury that may become recurrent or chronic. Some of these patients recover, but others go on to sinusoidal, perivenular, and pericentral fibrosis and cirrhosis. Even during the inflammatory stage without the presence of cirrhosis, patients may have portal hypertension, ascites, and esophageal varices.

Relation of cirrhosis to alcohol consumption. The alcohol content of various beverages is shown in Table 50-1. The development of alcoholic cirrhosis correlates with the quantity and duration of alcohol consumption. For men, the relative risk of cirrhosis has been estimated to be six times greater when consumption is 40 to 60 g of alcohol per day than when it is up to 20 g per day, and 14 times greater at 60 to 80 g per day. The average «cirrhogenic» dose has been calculated to be 40 to 80 g of ethanol per day consumed for approximately 10 to 12 years.

In a case-controlled study in men, the relative risk for cirrhosis was 1.83 for men consuming 40 to 60 g of absolute alcohol per day compared to men consuming less than 40 g per day. The relative risk rose to 100 for men consuming more than 80 g per day. The average cirrhogenic and threshold doses are lower in women than in men. There is no valid epidemiologic or clinical evidence to suggest that drinking habits (continuous vs. periodic) and the type of alcoholic beverage influence mortality from cirrhosis.

In patients with steatosis only, abstinence from alcohol may lead to resolution of the liver injury. However, if perivenular and sinusoidal fibrosis is present, abstinence may halt further damage, but the scarring may remain.

Alcoholic hepatitis is a disease of varying severity. The overall mortality is 10% to 15%. Healing is slow, and most patients require 2 to 8 months for recovery after stopping consumption of alcohol. The disease usually worsens after the first several days, regardless of the initial presentation. Patients may have encephalopathy and other complications during this stage, such as gastrointestinal bleeding from esophageal varices, gastritis or peptic ulcers, coagulopathy or disseminated intravascular coagulation, infections especially of the urinary tract and lungs, spontaneous bacterial peritonitis, and hepatorenal syndrome. A combination of serious complications often leads to death of the patient.

Many patients with a history of chronic alcoholism have episodes of acute alcoholic hepatitis superimposed on existing cirrhosis. It is thought that repeated bouts of alcoholic liver injury, necrosis, and fibrosis lead to extensive scarring and LaГ«nnec’s cirrhosis.

Supportive therapy. The mainstay of therapy for alcoholic hepatitis is supportive. Most patients require bed rest. Seriously ill patients should be admitted to an intensive care unit. If complications of portal hypertension exist, they should be promptly treated. Infections and concomitant pancreatitis should be ruled out or appropriately treated.

Protein-calorie malnutrition is present in most patients. The energy expenditure and protein degradation are increased. Insulin resistance is a ubiquitous finding. This causes fat to be preferred over carbohydrate as an energy source. Frequent feedings with a high-carbohydrate, high-fiber, and low-fat diet may decrease insulin resistance and improve nitrogen balance. In patients who cannot eat, enteral tube feedings may be given with standard formulas. Special formulations such as Hepatic-Aid may be reserved for the small minority of patients for whom encephalopathy remains a major problem after a fair trial of standard therapy. Patients should receive sufficient daily calories to provide basal energy expenditure (BEE) x 1.2 to 1.4 total kcal or 25 to 30 kcal/kg of ideal body weight. Thirty to thirty-five percent of total calories should be given as fat and the remainder as carbohydrate. Protein should not be restricted below 1 mg/kg unless encephalopathy necessitates further restriction.

In patients in whom enteral therapy is not possible, parenteral nutrition should be given promptly following guidelines similar to those outlined for enteral nutrition. The use of solutions rich in branched-chain amino acids such as hepatamine is controversial and is not necessary except in cases of hepatic encephalopathy and coma.

Alcohol withdrawal. Initially, symptoms of alcohol withdrawal may be present. Alcoholic seizures and delirium tremens should be prevented by strict attention to the patient’s metabolic status and by the careful administration of benzodiazepines. Because the metabolism of these drugs is altered in the presence of the «sick» liver and encephalopathy may easily be induced, reduced doses of diazepam or chlordiazepoxide should be used; oxazepam is preferable and may be used in regular doses.

Controversial therapies. Other therapies used in the treatment of alcoholic hepatitis are still controversial. They should be used only in carefully selected and controlled settings.

Corticosteroids – prednisone or prednisolone – given for 4 to 6 weeks at 40 mg have been shown in several studies to improve mortality in severely ill patients with alcoholic hepatitis and encephalopathy. No benefit has been reported for less seriously ill patients.

An equation has been developed to assess the severity of alcoholic hepatitis:

Discriminant function greater than 32 has been equated with severe disease. Using Discriminant function, several multicenter trials have confirmed the usefulness of prednisone in severely ill patients. Hepatic encephalopathy was noted to be a predictor of early mortality. Based on these studies, corticosteroid therapy for 28 days may reduce early mortality in severely ill patients with alcoholic hepatitis.

Polyenyl phosphotidylcholine, a 95% pure mixture of polyunsaturated phosphatidylcholines extracted from soybeans, prevents the transformation of its cells into collagen-producing transitional cells and also increases collagenase activity. It decreases oxidative stress, promotes collagen breakdown, and has been shown in baboons to prevent the development of fibrosis and cirrhosis. It is being tested in humans in clinical trials.

Silymarin, the active ingredient in milk thistle is thought to exert hepatoprotective actions through free-radical scavenging and immunomodulatory effects. In patients with alcoholic liver disease, improvement in liver chemistry tests and liver histology is thought to be the result of decreased lipid peroxidation and lymphocyte proliferation.

Anabolic steroids might benefit patients with alcohol-related liver disease because of their effects on protein and nucleic acid synthesis. A number of trials have been undertaken to assess the effects of these drugs. Currently, there is no consensus as to their value in any stage of alcoholic liver disease. Moreover, long-term use may promote peliosis hepatis and hepatocellular carcinoma. 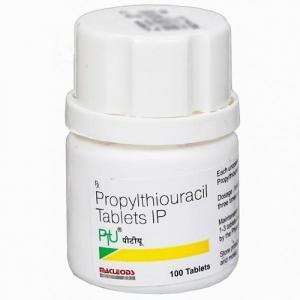 at doses of 300 mg per day for 45 days has been tried in patients with mild-to-moderate alcoholic hepatitis. Therapy with Propylthiouracil may reverse the relative tissue anoxia in the centrilobular zone of the liver by decreasing the rate of oxygen consumption. Patients receiving Propylthiouracil in several studies recovered more rapidly than controls. The effect of Propylthiouracil on severely ill patients is not known.

Colchicine has been advocated for therapeutic use in alcoholic liver disease because of its antiinflammatory, antimicrotubular, and antifibrotic actions; however, its effectiveness has not been established.

The suitability of patients with alcoholic liver disease as candidates for liver transplantation has been debated since the advent of transplantation programs. Clear guidelines are still lacking. Abstinence from alcohol is associated, in most patients, with improved liver function and prolonged survival. However, progressive liver failure develops in some patients despite abstinence. Because no effective therapy exists for decompensated alcoholic cirrhosis, patients with end-stage disease should be considered for liver transplantation. Unfortunately, the demand for donor livers exceeds the availability, and thus transplantation cannot, at present, supply each deserving patient. In patients referred for liver transplantation, it is important to rule out other alcohol-related medical problems, such as cardiomyopathy, pancreatitis, neuropathy, and malnutrition, which may worsen the overall prognosis. Posttransplant compliance with the medical regimen, continuation of strict abstinence from alcohol, and the availability of family or social support systems are important. When liver transplantation has been carried out, the outcomes have been good and do not differ substantially from those reported in patients with nonalcoholic liver disease.