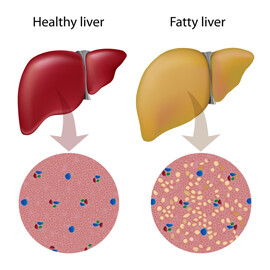 Hyperglycemia, insulin resistance, hyperinsulinemia, glucose intolerance, and type II diabetes mellitus have been described in 25% to 75% of adult patients with nonalcoholic steatohepatitis.

Hyperlipidemias including hypertriglyceridemia and hypercholesterolemia or both have been found to be present in 20% to 80% of patients with nonalcoholic steatohepatitis.

Most patients with nonalcoholic steatohepatitis seem to have multiple risk factors including obesity, type II diabetes mellitus, and hyperlipidemia.

Stainable iron may be present in 15% to 65% of patients. Pericellular, perisinusoidal, and periportal fibrosis have been described in 35% to 85% of patients with nonalcoholic steatohepatitis. The extent of fibrosis may vary considerably from patient to patient, ranging from mild fibrosis around small veins or groups of cells (chicken-wire fibrosis) to extensive, severe fibrosis with bridging of portal tracts and central veins and distortion of the hepatic architecture. Cirrhosis is found at initial liver biopsy in 7% to 16% of patients with nonalcoholic steatohepatitis and is indistinguishable from Laennec’s cirrhosis.

The pathophysiologic mechanisms involved in the progression from steatosis to steatohepatitis in Nonalcoholic fatty liver disease may be similar to those in alcoholic liver disease. Chronic oxidative stress has been implicated with formation of lipid hydroperoxides, induction of certain microsomal enzymes such as cytochrome P4502EI, mitochondrial damage with inhibition of mitochondrial electron transport chain activity, increased release of mitochondrial-derived reactive oxygen species (free radicals), and depletion of mitochondrial glutathione pools. Free-oxygen radicals induce lipid peroxidation of hepatocyte membranes, initiate an inflammatory response, and stimulate fibrosis. Hepatic steatosis is also thought to promote Kupffer’s cell dysfunction, impaired phagocytosis, and chronic low-grade endotoxemia. Endotoxin and endotoxin-induceable cytokines such as tumor necrosis factor-О± (tumor necrosis factor-О±), interleukin (IL)-6, and IL-8 are also implicated in pathogenesis of nonalcoholic steatohepatitis as in alcoholic hepatitis. Endotoxemia has been shown to stimulate hepatic production of tumor necrosis factor-О±, which induces the synthesis of other cytokines (e.g., IL-6 and IL-8), which promote neutrophil chemotaxis and an inflammatory response. In addition, leukocytes and Kupffer’s cells may stimulate the lipocytes to proliferate and activate and release fibrogenic cytokines that stimulate and sustain fibrosis. Hepatic iron may also contribute to the pathogenesis of nonalcoholic steatohepatitis by induction of lipid peroxidation of organelle membranes resulting in membrane disruption, impaired mitochondrial oxidative metabolism, and hepatocyte injury and death. Iron also activates lipocytes and stimulates collagen type I gene activation and fibrosis.

In summary, although the specific mechanisms involved in the pathogenesis of nonalcoholic steatohepatitis are unknown, it is thought that nonalcoholic steatohepatitis develops as a consequence of a two-hit process. The first hit is steatosis and the second hit involves oxidative stress, lipid peroxidation, inflammation, and fibrosis. These may be mediated by several factors including P4502EI induction, bacterial endotoxin, cytokines (i.e., tumor necrosis factor-О±), Kupffer’s cell dysfunction, and altered adenosine diphosphate [ATP] homoeostasis).