As stated above, the risk of overt gastrointestinal hemorrhage and subsequent death due to stress-related erosive syndrome are closely related to the underlying disease. Therapy must therefore be directed at treating the cause of physiologic stress. Hypovolemia and shock should be corrected with adequate and aggressive volume resuscitation. Sepsis must be treated aggressively with appropriate antimicrobial therapy, metabolic abnormalities corrected, ventilatory support optimized, and adequate nutrition instituted. Specific medical therapy emphasizes pharmacologic prophylaxis rather than treatment of active bleeding. Interventional therapy encompasses endoscopic, angiographic, and surgical approaches to control overt and clinically significant stress-related erosive syndrome-related hemorrhage.

Although prophylactic therapy has dramatically reduced the incidence of bleeding in stress-related erosive syndrome, a reduction in mortality due to bleeding has not been demonstrated. The inhibition of gastric acid secretion with H2 receptor antagonists (H2RAS) or proton pump inhibitors is the method used most extensively. The rationale for this approach stems from in vitro studies where an increase of intragastric pH to 3.5 to 4.0 is associated with decreased conversion of pepsinogen to pepsin and reduced proteolytic activity in the stomach. Moreover, when intragastric pH approaches 7.0, pepsinogen is irreversibly denatured and clotting factors become operable, enabling activation of the coagulation cascade. Finally, platelet aggregation, which occurs only at a pH > 5.9, also contributes to successful hemostasis and prevention of bleeding due to stress-related erosive syndrome. Although it has been postulated that optimal prophylaxis would require maintenance of intragastric pH at 7.0 or higher, most studies have demonstrated that an intragastric pH > 3.5 to 4.0 is associated with a reduction of gastroduodenal hemorrhage.

Other approaches used to prevent gastrointestinal bleeding due to stress-related erosive syndrome include the neutralization of gastric acid with antacids, the use of mucosal protective agents such as sucralfate or prostaglandins, and nonpharmacologic measures, such as the administration of enteral nutrition.

Antacids effectively neutralize intraluminal gastric acid and inhibit pepsin activity by increasing gastric pH. Antacids significantly reduce the frequency of overt and clinically significant gastrointestinal bleeding from stress-related erosive syndrome by 15 to 20%. The goal of acid neutralization therapy is to increase the intragastric pH to a 4 to inhibit the conversion of pepsinogen to active pepsin and thereby reduce proteolytic activity.

The administration of antacids in the intensive care unit requires close monitoring of intragastric pH and individual titration to maintain the pH > 4. Gastric residual should also be assessed to avoid the possibility of distention and subsequent tracheopulmonary aspiration. Antacids may also impair the systemic absorption of drugs, including antibiotics. Other shortcomings of antacids include the increased incidence of diarrhea caused by the high magnesium concentration found in many antacid preparations, the need for frequent administration (every 1 to 2 hours) usually via nasogastric tube, increased nursing time, and elevated cost. Aluminum-based antacids may cause hypophosphatemia, constipation, and metabolic alkalosis, as well as potentially toxic plasma aluminum levels in patients with renal insufficiency Because antacids are cumbersome to administer and the dose required to maintain intragastric pH near 4.0 is significant, these agents are no longer the drug of choice for SERS prophylaxis. 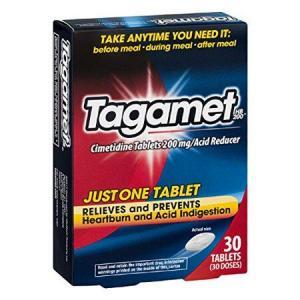 Only cimetidine (Tagamet) administered as a continuous intravenous (IV) infusion has Food and Drug Administration (FDA) approved labeling for the prevention of bleeding in critically ill patients. Other H2RAS given in equipotent doses appear to provide equivalent prophylactic efficacy. Cimetidine is typically administered intravenously by continuous infusion at doses of 37.5 to 100 mg/h, while ranitidine (Zantac) is dosed at 6.25 to 12.5 mg/h and famotidine (Pepcid) at 1.7 to 2.1 mg/h; all can be administered with or without a loading dose. Although no randomized controlled trials of adequate sample size have compared dosing regimens (intermittent versus continuous IV infusion) or routes (oral versus IV) using clinically significant bleeding as study endpoint, continuous H2RA infusion appears to provide more stable acid suppression than intermittent therapy. Continuous infusion administration of H2RAS for more than 48 hours has been associated with tolerance and intragastric pH variability, likely due in part to enhanced gastrin-induced histamine production and competition with H2RAS at the H2 receptor. A randomized controlled study of 1,200 patients requiring mechanical ventilation compared IV ranitidine with sucralfate in the prevention of upper gastrointestinal bleeding. The rate of clinically significant bleeding in the ranitidine group was 1.7% compared with 3.8% for the sucralfate group; the difference was statistically significant (p = 0.02).

Although H2RAS are considered to be very safe agents, they do possess both class specific and individual side effect profiles. The most prominent class specific effect is central nervous system toxicity, which appears to be idiosyncratic rather than dose-related and occurs more frequently in elderly patients and usually within the first 2 weeks of therapy. Dose adjustments are necessary in individuals with impaired renal function. In addition, cimetidine and ranitidine, unlike famotidine and nizatidine, inhibit the clearance of drugs by the cytochrome P450 system and thereby interfere with the clearance of a wide variety of drugs.

Because of their efficacy, excellent safety profile, and ease of administration, H2RAS are generally preferred over antacids and proton pump inhibitors in the prevention of stress-related erosive syndrome-related gastrointestinal hemorrhage.

Proton pump inhibitors are substituted benzimidazoles that work by irreversibly blocking hydrogen/potassium-ATPase (H+/K+-ATPase), the enzyme mediating the final common pathway involved in the secretion of acid. The following proton pump inhibitors are currently available: (1) omeprazole (Prilosec), (2) lanso-prazole (Prevacid), (3) rabeprazole (Aciphex), (4) panto-prazole (Protonix), and (5) esomeprazole (Nexium). All proton pump inhibitors are available as oral agents, and pantoprazole (Protonix) as an IV preparation. Proton pump inhibitors are prodrugs, which are normally activated after systemic absorption in the highly acidic milieu of the secretory canaliculus of activated parietal cells. Activation occurs principally after a meal, and because patients at risk for the development of stress-related erosive syndrome are generally fasting, these drugs would be significantly less effective unless administered in a manner that maintains a plasma level exceeding that generally achieved by oral dosing (ie, IV).

The use of proton pump inhibitors in stress-related erosive syndrome prophylaxis is controversial. Although a few small studies have suggested a beneficial effect, no large randomized trials have been performed to date to evaluate the benefit of these agents in the prophylaxis of stress-related erosive syndrome-associated gastrointestinal bleeding. Difficulties in the oral administration of omeprazole and lansoprazole to mechanically ventilated intensive care unit patients have not been resolved despite the recent development of suspensions that are somewhat effective in keeping gastric pH > 4. Two studies in mechanically ventilated intensive care unit patients suggested that a simplified omeprazole suspension might not only prevent clinically significant stress-related erosive syndrome-related hemorrhage, but is also safe and cost effective. However, the studies were small, open label, and nonrandomized. Omeprazole and lansoprazole are acid labile prodrugs that have been formulated as granules with an enteric coating designed to dissolve at pH 5.5. Thus, with the bicarbonate suspension the protective enteric coating is dissolved.

Although the drug is purportedly protected from the acidic environment in the gastric lumen by the bicarbonate, many other factors may influence acid exposure, including the amount of bicarbonate, as well as the pH and volume of the solution used to flush the suspension through a nasogastric tube. It is thus possible that the PPI released from the granules undergoes acid-catalyzed conversion to the reactive species, a thiophilic sulfenamide, with inactivation of the drug before arrival at its intended target site.

Although IV pantoprazole (Protonix) is currently approved by the FDA only for patients with gastroesophageal reflux disease who are unable to receive oral proton pump inhibitors, this agent has shown to be beneficial in the prevention of recurrent hemorrhage due to ulcers, and is quite likely to be useful for other indications, including stress-related erosive syndrome prophylaxis. Studies comparing the ability of IV administrations of EfeRAs and proton pump inhibitors to raise and maintain intragastric pH suggest that, although both can raise the pH to > 4, proton pump inhibitors are much more likely to maintain this pH. Unlike H2RAS, proton pump inhibitors can elevate and maintain the intragastric pH at > 6, and unlike EfeRAs, tolerance does not develop with IV preparations. Preliminary findings from clinical trials conducted within an intensive care unit setting have shown that intermittent administration of IV pantoprazole is as effective in raising intragastric pH on the first day as a continuous infusion of an H2RA. These data suggest that intermittent or continuous infusion with an IV PPI may he an alternative to high dose continuous infusions of an H2RA. If continuous IV infusion is used, the recommended dose of pantoprazole is an 80 mg loading dose, followed by an infusion of 8 mg/h.