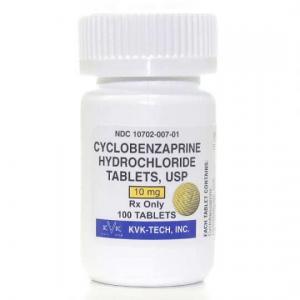 Note. The following terms have been used as ‘street names’ or slang names for various forms of cyclobenzaprine hydrochloride: Cyclo; Cyclone.

The United States Pharmacopeia 31, 2008, and Supplements 1 and 2 (Cyclobenzaprine Hydrochloride). A white to off-white, odourless, crystalline powder. Freely soluble in water, in alcohol, and in methyl alcohol; sparingly soluble in isopropyl alcohol; slightly soluble in chloroform and in dichloromethane; insoluble in hydrocarbons.

Cyclobenzaprine is structurally related to the tricyclic antidepressants and shares their adverse effects and precautions (see Amitriptyline). Cyclobenzaprine should be used with caution in the elderly and patients with hepatic impairment; use in moderate to severe hepatic impairment is not recommended. It may cause drowsiness; patients affected should not drive or operate machinery.

The elderly. Symptoms of toxicity (hallucinations, insomnia, and restlessness) were seen in a 76-year-old patient taking cyclobenzaprine at therapeutic doses. US licensed product information states that the elderly may be more likely to experience adverse effects such as hallucinations and confusion. In another study the mean elimination half-life of cyclobenzaprine in the elderly was longer than in younger subjects and clearance was reduced. It was suggested that it should be used in a reduced dose or frequency in the elderly.

Overdosage. Treatment of cyclobenzaprine overdose is mainly symptomatic and supportive. A large retrospective study found that cyclobenzaprine hydrochloride overdoses of up to 1 g rarely present with the serious cardiovascular and neurological effects seen with tricyclic antidepressant overdoses. There were no reports of seizures, life-threatening arrhythmias, orfatalities. However, 150 patients required treatment in the intensive care unit, 13 patients needed assisted ventilation, and 8 were unresponsive to stimuli. It was noted that observation may be sufficient for overdoses of under 50 mg in children.

Cyclobenzaprine is structurally related to the tricyclic antidepressants and may be subject to similar interactions (see Amitriptyline). The CNS effects of cyclobenzaprine may be enhanced by alcohol or other CNS depressants.

Antidepressants. A patient who already had QT prolongation associated with use of cyclobenzaprine and fluoxetine. developed torsade de pointes, progressing into ventricular fibrillation, when given droperidol as premedication prior to surgery. QT abnormalities resolved on stopping cyclobenzaprine.

Antipsychotics. For a report of an interaction between cyclobenzaprine and droperidol, see Antidepressants above.

Cyclobenzaprine hydrochloride is readily and almost completely absorbed from the gastrointestinal tract, although plasma concentrations vary considerably among individuals given the same dose. About 93% is bound to plasma proteins and has a reported effective half-life of 8 to 37 hours. It is extensively metabolised, principally to glucuronide conjugates, and excreted in the urine. Cytochrome P450 isoenzymes CYP3A4, CYP1A2, and to a lesser extent CYP2D6 mediate its demethylation. Some unchanged drug appears in the bile and is excreted in the faeces.

Cyclobenzaprine hydrochloride is a centrally acting skeletal muscle relaxant, related to the tricyclic antidepressants. It acts mainly at the brain stem to decrease tonic somatic motor activity influencing both alpha and gamma motor systems. Additional activity at spinal cord sites may be involved. Effects begin within 1 hour of a dose by mouth; the effects of a single dose have been reported to last as long as 12 to 24 hours.

It is used as an adjunct in the symptomatic treatment of painful muscle spasm associated with musculoskeletal conditions. The usual dose is 5 mg three times daily given by mouth, increased if necessary to 10 mg three times daily. Treatment for more than 2 or 3 weeks is not recommended. A starting dose of 5 mg with less frequent dosing is recommended for elderly patients. For doses in patients with hepatic impairment, see below. A modifled-release preparation of cyclobenzaprine hydrochloride is also available for once-daily dosing.

Back pain. A meta-analysis of 14 studies concluded that cyclobenzaprine hydrochloride, in the short term, improves low back pain. Doses given to patients were titrated and ranged from 10 to 60 mg daily with a median dose of 30 mg daily. Patients improved moderately in the first 4 days of treatment, with the effects of cyclobenzaprine hydrochloride gradually declining with time although there was some evidence of continued improvement at 2 weeks. Further studies are needed to determine the optimal length of use in the management of acute back pain. Adverse effects were common, occurring in at least 53% of patients.

Fibromyalgia. Studies of the efficacy of cyclobenzaprine in the management of fibromyalgia, a painful musculoskeletal disorder which usually responds poorly to analgesics (see Soft-tissue Rheumatism), have produced conflicting results but a meta-analysis of 5 such studies suggested that cyclobenzaprine had some modest benefit in the condition. Patients were more likely to report overall improvement and moderate reductions in individual symptoms, particularly sleep, while taking the drug

The United States Pharmacopeia 31, 2008, and Supplements 1 and 2: Cyclobenzaprine Hydrochloride Tablets.

United States of America (US and USA): Amrix; Fexmid; Flexeril.