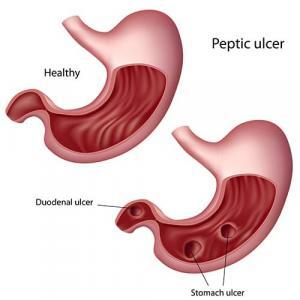 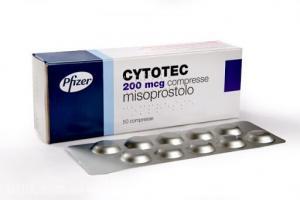 Prostaglandin analogs, (e.g., misoprostol (Cytotec)) have been used to treat peptic conditions in clinical trials and appear to be as effective as H2 antagonists in healing ulcers when administered in doses that inhibit acid secretion. However, there is little evidence that synthetic prostaglandins are clinically effective when given in the lower, purely cytoprotective doses that have no effect on acid secretion. Whether the synthetic prostaglandins offer any practical advantages over current therapy is debatable, although one analog that is commercially available, misoprostol, appears to be useful in the prevention and treatment of nonsteroidal antiinflammatory drug-induced gastric ulcers or erosions. Side effects of prostaglandins are diarrhea, and abdominal cramping related to the stimulatory effects of prostaglandins on intestinal smooth muscle and secretion. The contractile effect of prostaglandins on uterine smooth muscle could lead to abortion in pregnant women. For this reason, prostaglandins are not recommended for pregnant women or women of childbearing age who are not using a method of contraception. 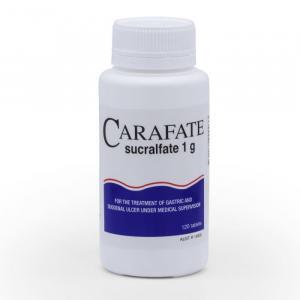 Choice of drugs. A wide variety of antiulcer drugs are available to the practitioner. There is little difference in efficacy among treatment regimens using an antacid, an H2 antagonist, a prostaglandin, or sucralfate.

However, proton-pump inhibitors offer advantages in terms of acceleration of healing and is preferred in the treatment of esophageal, gastric and duodenal ulcers as well as refractory peptic ulcer disease and gastric hypersecretory syndromes (e.g., Zollinger-Ellison syndrome). All of the drugs are remarkably safe, and the choice of a drug regimen depends largely on patient or physician preference, cost, and ease of administration. All patients with peptic ulcer disease should be tested for H. pylori either by serologic testing or by endoscopic biopsy techniques and treated for the cure of H. pylori infection.

Long-term treatment. Peptic ulcer disease in most patients is a chronic relapsing condition. Numerous studies have shown that maintenance therapy with a dose of medication that is lower than the dose used to treat acute disease markedly reduces the risk of ulcer recurrence. For example, treatment of patients who have a healed duodenal ulcer with either cimetidine 400 mg at bedtime, ranitidine 150 mg at bedtime, famotidine 20 mg at bedtime, or sucralfate 1 g b.i.d. for 1 year reduces the ulcer recurrence rate to about 25% compared to a 75% recurrence rate in placebo-treated patients.

This experience raises some issues. On one hand, one must consider the costs and risks of the drugs over the long-term; on the other hand, one must also consider the cost and morbidity of ulcer recurrence. In some patients, because of frequent symptoms or complications such as recurrent ulcer bleeding, it is clear that a long-term treatment program is indicated. Other patients have symptoms at predictable times and benefit from therapy that is limited to several weeks to months. Still other patients have such infrequent or mild symptoms that short, intermittent courses of anti-ulcer drugs are sufficient.

In patients who have H. pylori infection and peptic ulceration, eradication of H. pylori has been shown to reduce the recurrence rate of duodenal and gastric ulcers. In patients with recurrent ulcers, H. pylori eradication may result in permanent cure.

Treatment of H. pylori can be accomplished by various regimens including bismuth based or proton-pump inhibitor regimens that include two antibiotics. Since effective treatment requires patient compliance, the simpler regimens are preferred. These oral regimens included a proton-pump inhibitor b.i.d., clarithromycin 500 mg b.i.d., and amoxicillin 1 g b.i.d. or metronidazole 500 mg b.i.d. for 10 to 14 days.