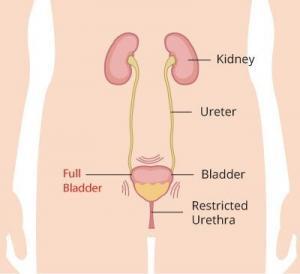 Until recently, there was little data about risk factors for acute urinary retention (AUR). Men with enlarged prostates seem to get it more, but that’s about all that was certain about this problem. Now, a new study published in the “Journal of Urology” sheds light on who’s most at risk for this painful condition.

Over 6,000 men from a long-term health study completed questionnaires about AUR and lower urinary tract symptoms. These men also filled out general health questionnaires every other year.

Overall, four to five men per 1,000 had acute urinary retention episodes each year during this two-year study. Chances of AUR increased with age, severity of urinary symptoms, and diagnosis of benign prostatic hyperplasia (BPH). Men with BPH who also had high symptom scores were nine times more likely to have an AUR episode than men without severe symptoms or benign prostatic hyperplasia.

About two-thirds of the men with AUR episodes had either high symptom scores or BPH, but about 20 percent of episodes occurred in “low-risk” men with no urinary problems or benign prostatic hyperplasia.

The urinary tract symptoms that made up the scale are:

Sensation of incomplete bladder emptying,
Having to void again after less than two hours,
Stopping and starting several times during voiding,
Difficulty postponing voiding,
Weak urinary stream,
Having to push or strain to begin voiding, and
Typically got up three times/night or more to void during the past month.

Having one of these symptoms more than 25 percent of the time doubled or tripled the risk for acute urinary retention, as did worsening of symptoms over a two-year period. Symptoms of urinary irritation or obstruction (incomplete emptying, urinary frequency, weak urine stream) particularly increased risk for AUR. Men taking calcium blockers, beta-blockers, or antiarrhythmic drugs were also at increased risk.

This research confirms that lower urinary tract symptoms are an important risk factor for AUR, whether measured by severity or increased frequency — a fact that has been inconclusively studied in the past. The study also confirms that acute urinary retention risk increases with age and presence of benign prostatic hyperplasia.