This article deals with the evidence for the best management of Helicobacter pylori infection.

• Indications for Helicobacter pylori eradication treatment are active peptic ulcer disease or a history of it and proven infection, bleeding peptic ulcers and low-grade non-Hodgkin’s lymphomas. 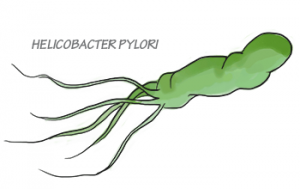 • As yet the role of Helicobacter pylori eradication is unclear in patients with advanced and worsening forms of gastritis such as intestinal metaplasia, glandular atrophy and erosive and hypertrophic forms of gastritis, and after resection for early gastric cancer. Long-term follow-up studies are needed to show the effect of successful eradication on development of premalignant mucosal abnormalities and the development of gastric malignancies.

• The urea breath test has been suggested by the European consensus to be a reliable diagnostic test. Its sensitivity is 90-95%. Enzyme-linked immunosorbent assay (ELISA) serological testing may be appropriate, but only if the test is validated locally. Desktop serological tests have sensitivities ranging from 63-97%.

• Patients under the age of 45 years without alarm symptoms may be managed in primary care. Continuing symptoms after eradication suggest another disease process (such as reflux). Such patients should then be referred to a specialist, their Helicobacter pylori status assessed with gastric antrum and corpus biopsies. If persistent infection is found, the resistance pattern of the Helicobacter pylori should guide further treatment.

• Several studies have shown that dual therapy (omeprazole and amoxy-cillin) cannot be recommended because the eradication rates are too low compared with triple or quadruple therapy. The most recent development is the use of omeprazole and two antibiotics, usually clarithromycin and amoxycillin or metronidazole, with eradication rates of 90%. Compliance (often a problem) should be at least as good as the other regimens, because of twice daily dosing and fewer side effects.

• As Helicobacter pylori recurrence is rare after successful eradication, no ulcer relapse is to be expected. The authors therefore recommend stopping acid suppression therapy after eradication therapy in uncomplicated ulcer disease, if the patient is asymptomatic.

In this multicentre trial, about 300 patients infected with Helicobacter pylori and suffering from dyspepsia were given omeprazole, amoxycillin and clarithromycin or placebo for 7 days. Follow-up was for 12 months.

• At 12 months, Helicobacter pylori was eradicated in 85% of the treatment group and 4% of the placebo group. Changes in symptom scores and quality of life did not differ significantly between the groups.

The authors conclude that the eradication of Helicobacter pylori does not relieve non-ulcer functional dyspepsia.