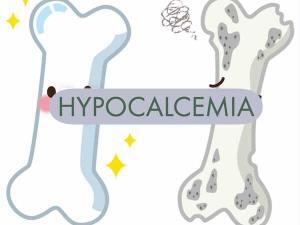 Calcium Complexation: Many agents can induce hypocalcemia by causing complexes to form between the medication and serum calcium.This complexation of calcium is so rapid and massive that maximal PTH secretion is inadequate to compensate for the sudden drop in serum calcium. A classic example of this phenomenon is foscarnet, an antiviral agent often used in immunocompromised patients. Foscarnet chelates with calcium, resulting in a reduction in both total and ionized calcium serum levels. Ethylene glycol has also been identified with this complexation phenomenon.

Altered Gastric Acidity: Medications that alter gastric acidity may also impact the absorption of calcium from the diet. Drugs that increase gastric pH can also decrease the breakdown of fat necessary to complex with calcium, thus reducing gut absorption.H2-antagonists such as cimetidine have been implicated in this phenomenon. While not yet reported in the literature, other agents known to increase gastric pH can also inhibit gastric absorption of calcium salts through similar mechanisms. Such agents include the proton pump inhibitors omeprazole and lansoprazole.

In addition to its presence in antacid preparations, aluminum is found as a contaminant in several of the additives in total parenteral nutrition (TPN) solutions. Originally linked with protein hydralysates, total parenteral nutrition-induced metabolic bone disease still occurs in patients receiving chronic TPN. It is thought that calcium gluconate and potassium phosphate salts contain sufficient aluminum to impair bone formation or mineralization. Therefore, it has been suggested that the use of calcium acetate salts and sodium phosphate salts may reduce these risks.

Osteoporosis Drugs: Agents typically used to treat osteoporosis can themselves induce metabolic bone disease if used too aggressively. Calcitonin and bisphosphonates can cause chelation and end organ inhibition, resulting in an overall reduction in osteoclast bone resorption.Sodium fluoride, an agent often used to treat drug-induced osteoporosis, can also cause hypocalcemia by inducing excessive rates of skeletal mineralization. This can create calcium-chloride complexes.

Osteomalacia may also result from a deficiency or impaired utilization and/or excretion of inorganic phosphate. The result is hypophosphatemia. Patients with peptic ulcer disease who chronically use aluminum-containing antacids may be at risk of developing hypophosphatemia. This is due to complexation of the aluminum with the ionorganic phosphates residing in the intestine. As a result, an insoluable salt is formed.

Blood Transfusions/plasmapheresis: Other therapies — such as blood transfusions or plasmapheresis — may predispose patients to hypocalcemia due to the presence of the anti-clotting agents in the blood products. For example, calcium citrate salts present in blood products can induce hypocalcemia by chelating with serum calcium. Similarly, patients undergoing radiologic procedures with contrast dyes containing EDTA (ethylene diamine tetracetic acid) may also have an increased propensity to develop hypocalcemia as a result of chelation of calcium with EDTA. Fortunately, however, the resulting hypocalcemia in these cases appears to be mild.

Excessive alcohol use and smoking have been associated with osteoporosis.

Smoking: Tobacco smoking appears to have an antiestrogen effect. Estrogen prevents bone breakdown through several possible mechanisms, including blocking bone resorption by shortening the lifespan of osteoclasts. Osteoclasts are responsible for bone breakdown. In addition to undergoing the pharmacologic effects of tobacco, smokers tend to be less physically active and more prone to poor nutrition, thus increasing their risk for osteoporosis.Smokers should be encouraged to quit so as to reduce further tobacco-related bone loss.

Osteoporosis and related bone disorders easily come to mind when one pictures an elderly, postmenopausal female. However, it is important for pharmacists and other healthcare providers to recognize the potential for bone damage in a wider patient population, due to drug therapy. A number of drugs have been documented to directly interfere with the absorption and/or activities of calcium or vitamin D — agents critical to the proper maintenance of healthy bone. Other drugs may have a more indirect action on bone structure, such as agents that reduce magnesium stores. The net effect of lowered magnesium levels is reduced serum calcium levels, to the detriment of healthy bone. Pharmacists should be familiar with drugs that can alter calcium or vitamin D levels in patients. Patients at risk for bone disorders due to medications should be counseled about this risk and advised of steps they can take to prevent or minimize bone damage.