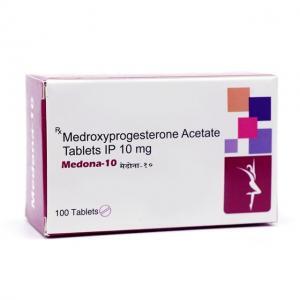 Pharmacopoeias. In China, Europe, International, and US.

The United States Pharmacopeia 31, 2008 (Medroxyprogesterone Acetate). A white to off-white, odourless, crystalline powder. Insoluble in water sparingly soluble in alcohol and in methyl alcohol soluble in acetone and in dioxan freely soluble in chloroform slightly soluble in ether. Store in airtight containers at a temperature of 25°, excursions permitted between 15° and 30°. Protect from light.

As for progestogens in general (see Progesterone). See also under Hormonal Contraceptives. Medroxyprogesterone acetate may have glucocorticoid effects when given long term at high doses.

Breast feeding. Medroxyprogesterone is reported to be distributed into breast milk when given as a depot progestogen-only contraceptive. No adverse effects have been seen in breast-fed infants of mothers given medroxyprogesterone, and the American Academy of Pediatrics considers that it is therefore usually compatible with breast feeding. Progestogen-only parenteral contraceptives should not be used until 6 weeks after birth if the woman is breast feeding (see Breast Feeding under Hormonal Contraceptives).

Carcinogenicity. The risk of various cancers associated with the use of depot medroxyprogesterone acetate as a contraceptive has been evaluated by WHO. Overall, there was no increase in risk of breast cancer, although there is some evidence that current or recent use may be associated with a slight increase in risk. There was no significant increased risk of cervical cancer, and a protective effect against endometrial cancer. In contrast to combined oral contraceptives, there was no evidence of a protective effect against ovarian cancer.

Glucocorticoid effects. There have been reports of Cushing’s syndrome induced by medroxyprogesterone acetate in patients receiving long-term therapy with high doses for the treatment of malignant neoplasms or paraphilia. Cushingoid symptoms regressed when treatment was stopped. Medroxyprogesterone possesses glucocorticoid activity and there is a risk of adrenal insufficiency during periods of stress or after sudden withdrawal of treatment. Some consider that patients should be monitored for glucose intolerance and adrenal insufficiency during treatment.

Medroxyprogesterone is absorbed from the gastrointestinal tract. In the blood, it is highly protein bound, principally to albumin. It is metabolised in the liver and excreted mainly as glucuronide conjugates in the urine and faeces. It has a half-life of about 16 to 30 hours after oral doses the half-life may be as long as 50 days after intramuscular injection. Medroxyprogesterone is reported to be distributed into breast milk.

Medroxyprogesterone acetate is a progestogen structurally related to progesterone, with actions and uses similar to those of the progestogens in general (see Progesterone). It is given orally or, for prolonged action, as an aqueous suspension by intramuscular or subcutaneous injection, depending on the product. It is used for the treatment of menorrhagia and secondary amenorrhoea in oral doses of 2.5 to 10 mg daily for 5 to 10 days starting on the assumed or calculated 16th to 21st day of the menstrual cycle, although treatment may begin on any day in secondary amenorrhoea.

In the treatment of mild to moderate endometriosis usual oral doses are 10 mg three times daily for 90 consecutive days, or 50 mg weekly or 100 mg every 2 weeks by intramuscular injection for at least 6 months. An alternative formulation used for the treatment of pain associated with endometriosis is given in a dose of 104 mg in 0.65 mL by subcutaneous injection once every 12 to 14 weeks.

Medroxyprogesterone acetate may also be used in the palliative treatment of some hormone-dependent malignant neoplasms. In breast carcinoma (see below) oral doses of 0.4 to 1.5 g daily may be given, although doses up to 2 g daily have been used in the past. Intramuscular medroxyprogesterone acetate has been given in initial doses of 500 mg daily for 4 weeks, then in maintenance doses twice weekly. In endometrial (below) and renal carcinoma oral doses have ranged from 200 to 600 mg daily. Initial doses of 0.6 to 1.2 g weekly have been given by intramuscular injection, reducing to a maintenance schedule of as little as 450 mg monthly. In prostatic carcinoma oral doses have been 100 to 600 mg daily 500 mg has also been given by intramuscular injection, initially twice weekly for 3 months then once weekly for maintenance.

Cachexia. Medroxyprogesterone may improve appetite and food intake, and prevent loss of body-weight in cachexia associated with severe chronic disorders, although information is limited.

Male hypersexuality. The anti-androgenic action of medroxyprogesterone has been used for suppression of libido in the control of men with deviant or disinhibited sexual behaviour (see Disturbed Behaviour). Most have received intramuscular medroxyprogesterone acetate doses of about 300 mg weekly have been used, but ranged from 100 mg each month to 500 mg each week in one report of 5 cases, and up to 750 mg each week in another case. Oral treatment with 30 mg daily was also successful in 1 case.

Malignant neoplasms. BREAST. Progestogens are used as second- or third-choice drugs in the hormonal therapy of advanced breast cancer. Some references to the use of medroxyprogesterone acetate in advanced breast cancer are cited below. Comparative studies have shown that patients respond equally well to medroxyprogesterone and either mepitiostane, aminoglutethimide, or oophorectomy.

ENDOMETRIUM. Progestogens are used in the treatment of advanced endometrial carcinoma but there are doubts about their value in the earlier stages of disease. Medroxyprogesterone acetate was effective in a rare case of low-grade endometrial stromal sarcoma. It has also been used in a few patients as adjuvant therapy after surgery and for the treatment of metastatic disease.

Respiratory disorders. Reviews of the use of medroxyprogesterone acetate in obstructive sleep apnoea have concluded that it has a limited role.

Progesterone and, more commonly, medroxyprogesterone acetate are used in the treatment of pulmonary lymphangioleiomyomatosis, a rare disease affecting only women. Anecdotal evidence suggests some patients improve or stabilise on treatment, possibly those with chylous effusions or chylous ascites. However, a more rapid decline in lung function has also been observed with progestogen therapy in some groups. Medroxyprogesterone acetate was reported to be effective in treating congenital central hypoventilation syndrome in 2 children. It has also been used in adults with central hypoventilation resulting from brainstem stroke and other causes. Medroxyprogesterone has also been investigated for its effects on respiration in chronic obstructive pulmonary disease, sometimes with acetazolamide.

Sickle-cell disease. The frequency of painful crises has been reduced in women with homozygous sickle-cell disease given intramuscular depot medroxyprogesterone acetate, and it is now considered to be a suitable contraceptive for this group (see also Sickle-cell Disease, under Precautions of Hormonal Contraceptives.