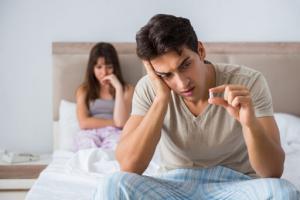 Pharmacists can have a significant impact on the quality of life of men who suffer from erectile dysfunction. To impact the care of these patients one must first recognize that there is a potential problem and then develop sensitive communication skills to stimulate discussion with the patient and/or his significant other. This approach can help the patient understand the various treatment options that can be utilized to overcome impotence. Since pharmacists see patients more than any other health-care provider and are respected and trusted by patients, pharmacists can impact the patient’s life in a very positive way. With the baby-boomer generation reaching their middle years, erectile dysfunction (ED) will be a major concern for a high percentage of the U.S. population.

The history of treating erectile dysfunction is fascinating. At one time impotence was considered a result of witchcraft or evil-doers’ handiwork. Some church groups considered sexual problems as externally imposed disturbances of the individual. In the 19th century the medical profession began to regard sexual functioning as potentially a medical problem, but it has only been in recent decades that this subject has been confronted in a scientific manner and treatment options developed. Determining the actual frequency of erectile dysfunction is difficult, though studies have suggested a prevalence of 7%–8% of the male population. Conservative estimates are that at least 20 million American men may be unable to achieve or maintain a penile erection. The prevalence of impotence in men with diabetes is particularly high and is estimated to range from 35%–50%.

Impotence occurs in various degrees, and may range from an erection not rigid enough for sexual intercourse to an erection that cannot be sustained or the complete inability to achieve an erection. More recent studies estimate that between 20 and 30 million American men are affected by some degree of impotence, constituting a major health problem. Impotency is largely due to organic causes but in some cases may be psychological.Diabetes, hypertension, multiple sclerosis, and medications are but a few causes of erectile dysfunction. From progress in this field over the past decade, pharmacologic treatment has emerged as a highly successful alternative to a surgically implanted penile prosthesis or vacuum device. Depression, anger, and lack of self-esteem and self-confidence are often seen in men with erectile dysfunction. Few treatments can so greatly improve quality of life for both men with erectile dysfunction and their partners as the treatment of impotence.

A pair of long tubular-shaped structures called the corpus cavernosa originate in the body cavity and extend the length of the penis. The cavernosa is composed of thousands of tiny sacs, much like miniature balloons, each surrounded by smooth muscle. When the penis is flaccid, the tone of the muscles around these sacs is increased and keeps the sacs collapsed. With stimulation, either physical or from the brain, these muscles are signaled to relax, allowing blood to fill the tiny sacs. Encircling the cavernosa is the tunica, a tough and rather inelastic membrane just under the skin of the penis. Veins beneath the tunica normally drain blood away from the penis. As the cavernosa fill and expand against the rigid tunica, these veins are squeezed shut, keeping the sacs filled with blood and resulting in an erection. Adequate blood supply, nerve function, and hormones work in harmony to produce an erection. Disruption in one or more of these factors can cause impotence.