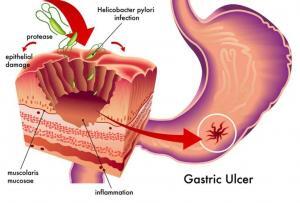 The attitudes of primary care physicians to the treatment of Helicobacter pylori infection have been examined in several studies. In one study conducted in a family practice in 1995, Penston and Mistry studied 154 patients treated for H. pylori infection. Eighty percent were treated for duodenal ulcer and the remainder for non-ulcer dyspepsia or reflux disease. They found that H. pylori infection was documented in only a third of patients prior to the initiation of therapy. The vast majority of these patients were, therefore, receiving empirical therapy in the absence of documented infection. Furthermore, when they examined the regimens being prescribed, they found that 56 different treatment regimens had been prescribed, and the most frequently prescribed regimen was omeprazole and amoxicillin, a poor regimen for the eradication of H. pylori. The management of patients with complicated ulcer disease was particularly poor and did not assure against future hemorrhage or perforation. In a more recent study, Breuer et al. reported a survey of 486 family practitioners who filled out a questionnaire. Eighty-nine percent of them reported that they treated patients for Helicobacter pylori infection at first presentation with ulcer disease. Sixty-five percent treated all H. pylori-infected patients regardless of the clinical circumstances, and 72 percent treated patients with non-ulcer dyspepsia. These data were significantly different from gastroenterologists, 98 percent of whom treated patients with ulcer disease while only 43 percent treated non-ulcer dyspepsia and 24 percent treated all H. pylori-positive cases regardless of clinical circumstances. 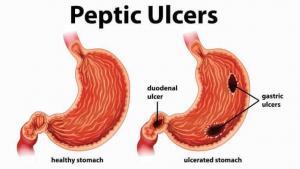 Dyspepsia is defined as a persistent or recurrent abdominal pain centered in the upper abdomen. Dyspepsia is a common finding in clinical practice, but symptoms have a poor predictive value for the underlying diagnosis. Approximately half of the patients presenting to primary care doctors with dyspepsia have a functional disorder, and only 15 percent of them have peptic ulcer disease. Unfortunately, this is not as well appreciated in primary care as it should be. In a recent survey of primary care physicians, we found that 48 percent of them believed that symptoms of ulcer disease were strongly correlated with the endoscopic diagnosis. A number of studies on H. pylori eradication in non-ulcer dyspepsia have been published, and all have been criticized for their methodology. At the present time, it appears that only a minority of patients with non-ulcer dyspepsia will benefit from therapy directed at Helicobacter pylori infection.

In 1985, the American College of Physicians published a guideline on dyspepsia which suggested that patients should be given an empirical trial of H2 receptor antagonists and undergo further testing only if symptoms relapsed or if they persisted despite therapy. These guidelines have been widely used by managed care organizations to determine which patients should undergo endoscopy but were never systematically analyzed until 1996. Bytzer et al. randomized patients to treatment with H2 receptor antagonists, as recommended by the American College of Physicians, or early endoscopy and followed the patients for a year thereafter. Patients were cared for by primary care physicians who determined if endoscopy or further interventions should be performed. At the end of one year, patient satisfaction was poorer, drug costs were higher and the time lost from work was higher in the group of patients randomized to initial H2 receptor antagonist therapy. A large percentage of the patients initially randomized to H2 receptor antagonist therapy eventually had endoscopy for recurrent or unresolved symptoms. This study and the discovery of Helicobacter pylori infection have rendered these guidelines obsolete. It is not surprising, given the poor results with this guideline that it has had a limited impact on routine clinical practice.

In 1996, the European H. pylori study group issued guidelines on the management of dyspeptic patients and suggested that patients 45 years or younger should be tested and treated for H. pylori using a non-invasive test. It was suggested that older patients or patients with so-called alarm symptoms (bleeding, weight loss, early satiety) should undergo investigation because of the small but increased risk of missing a gastric malignancy in these subjects. These guidelines are consensus based and cannot claim to have met the criteria for an evidence-based approach. Economic models suggest that serologic testing and treatment become cost-effective as an initial strategy when as few as 15 percent of patients are cured of their symptoms. Preliminary data from our group suggest that complete cure of all symptoms that is sustained for one year may be possible in a substantial number of infected patients, supporting the position of these consensus statements.