Development and Mechanism of Action 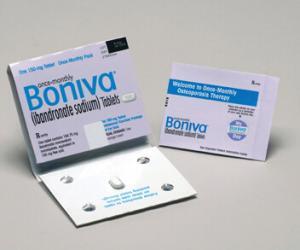 Osteoporosis affects over 10 million Americans, and it is estimated that an additional 15 to 20 million people are at risk for developing the disease. The majority (80%) of those afflicted with osteoporosis are female. The onset of osteoporosis occurs as early as age 40 and it is responsible for bone fractures in nearly half of all women over age 50. It is estimated that nearly 80% of women 80 and older have full-blown disease, and almost 20% of men over 80 suffer hip fractures, presumably from osteoporosis. Nearly half of all women and men with hip fractures never return to prefracture function, and many require chronic medical care. Osteoporosis occurs when bone resorption outpaces bone formation. Bone is constantly undergoing cycles of resorption and formation (remodeling) to maintain tissue integrity and the concentration of calcium and phosphate in the extracellular fluid. When the serum calcium drops below a certain level, parathyroid hormone (PTH) secretion increases, resulting in stimulation of bone resorption by osteoclasts to restore calcium levels to normal. Low calcium also slows renal calcium excretion and acts via vitamin D3 to increase intestinal calcium absorption. With aging, vitamin D3 levels drop, resulting in calcium malabsorption that, in turn, stimulates bone resorption. Estrogen deficiency of menopause exacerbates this problem by increasing the sensitivity of bone to resorbing hormones and agents.

The primary approaches for the prevention or treatment of osteoporosis include 1) supplementation with calcium and/or vitamin D, 2) anabolic agents that increase bone formation (PTH or PTH derivatives), and 3) antiresorptive drug therapy with estrogen, selective estrogen receptor modulators (eg, raloxifene), calcitonin, or the bisphosphonates. The bisphosphonates available include etidronate (Didronel), alendronate (Fosamax), pamidronate (Aredia), tiludronate (Skelid), risedronate (Actonel), zoledronate (Zometa), and now ibandronate. These drugs have proven effective in the management of a variety of disorders related to abnormal bone and calcium metabolism. Depending primarily on clinical development efforts, they currently are indicated for one or more bone pathologies including osteoporosis in postmenopausal women, Paget’s disease, heterotopic ossific ation associated hip replacement, osteolytic bone metastases of breast cancer, osteolytic lesions of multiple myeloma, or hypercalcemia of malignancy. Although the precise mechanism of action is not completely understood, these agents bind with high affinity for hydroxyapatite, the mineral matrix element of bone, and this results in potent inhibition of osteoclast-mediated bone resorption. The bisphosphonates also produce decreases in the biochemical markers of bone turnover including urinary C-terminal telopeptide of type I collagen and serum osteocalcin. As the bone remodeling cycle is slowed, formation and resorption are decreased, although resorption is inhibited more than formation. This process leads to a modest increase in bone mineral density (BMD). The osteogenic action of bisphosphonates and their relative lack of activity outside the skeleton have led to the increased use of these agents in treating osteoporosis.

Ibandronate displays very low oral bioavailability (0.6%) and absorption is significantly reduced in the presence of food, beverages other than water, or any medication or supplements including calcium, antacid, or vitamin D product. The time to maximum plasma concentrations ranges from 0.5 to 2 hours with standard oral doses. Absorbed ibandronate either rapidly binds to bone or is excreted renally. The apparent terminal volume of distribution is at least 90 L and the amount of the absorbed dose bound to bone is estimated to be 40% to 50%. Ibandronate is 85% to 99% bound by plasma proteins, depending on plasma concentration. Similar to other bisphosphonates, ibandronate does not undergo metabolism. The fraction of the absorbed ibandronate not bound to bone is eliminated renally as the parent drug. Unabsorbed drug is eliminated in the feces. The terminal half-life of ibandronate is 10 to 60 hours. Based on its clearance profile, no dose adjustment is required in patients with hepatic impairment or mild to moderate renal impairment (CrCl > 30 mL/min). However, ibandronate is not recommended for patients with severe renal impairment (CrCl < 30 mL/min).

Ibandronate is indicated for treatment and prevention of osteoporosis in postmenopausal women. The approval of ibandronate for treatment was based on results obtained from a three-year, controlled, multinational pivotal phase III trial that included 2,946 postmenopausal women with osteoporosis between ages 55 and 80. Trial subjects were treated with either placebo or one of two oral ibandronate dosing regimens: daily (2.5 mg) or intermittent (20 mg) taken every other day for 24 days followed by a between-dose interval of more than two months. All participants received daily oral calcium (500 mg) and vitamin D (400 IU) supplementation. The main outcome measure was the occurrence of new radiographically diagnosed fractures of the vertebrae after three years of treatment. In this study 2.5 mg daily of ibandronate reduced the risk of new vertebral fractures by 62% compared with placebo; the intermittent dose (20 mg) of ibandronate reduced the risk of new vertebral fractures by 50% compared with placebo. The cumulative incidence of vertebral fractures in the placebo group was 9.6% over three years, versus 4.7% in the 2.5-mg daily group and 4.9% in the 20-mg intermittent group. The approval of ibandronate for the prevention of osteoporosis was based on a randomized, controlled two-year trial involving 653 postmenopausal women without osteoporosis, ages 41 to 82. Study subjects were given 0.5 mg, 1.0 mg, or 2.5 mg of ibandronate or placebo and all subjects were given 500 mg of supplemental calcium daily. In this study treatment with 2.5 mg daily of ibandronate resulted in a mean increase in lumbar spine bone mineral density of 3.1% compared with placebo after two years of treatment. Treatment with ibandronate at this dose level also resulted in an increase in BMD of the hip by 1.8%, of the femoral neck by 2.0%, and of the trochanter by 2.1%.

In clinical trials to date ibandronate has demonstrated a favorable tolerability profile; the most commonly reported adverse events were upper respiratory tract infection (35%), back pain (14%), arthralgia (8%), dyspepsia (12%), and bronchitis (10%). The percentage of subjects who withdrew from the study due to adverse events was approximately 18% in each of the clinical trial groups; the primary reason for drug discontinuation was GI tract adverse effects. There have been reports of ocular inflammation associated with bisphosphonates, but none were reported in ibandronate trials.

Ibandronate is supplied as 2.5-mg white, oblong, film-coated tablets. The recommended dose for the treatment and prevention of postmenopausal osteoporosis is one 2.5-mg tablet per day. To optimize absorption and minimize adverse reactions, ibandronate tablets should be taken at least one hour before the first food or drink (other than water) of the day, or any medication or supplements including calcium, antacid, or vitamin D products. The tablets should be swallowed whole with a full glass (6 to 8 ounces) of plain water while sitting upright or standing. Plain water is recommended since some mineral water products contain a higher concentration of calcium. Patients should remain upright for one hour after taking ibandronate tablets. No dose adjustment is required in patients with hepatic impairment or mild to moderate renal impairment (CrCl > 30 mL/min). Ibandronate is not recommended for patients with severe renal impairment (CrCl < 30 mL/min).