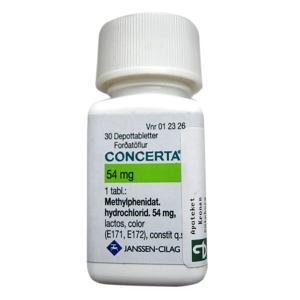 For several years the drug Ritalin (methylphenidate) has benefited children with attention deficit hyperactivity disorder (ADHD), which is estimated to afflict some 3-5% of American school-age children. But the drug needs to be taken 2-3 times a day, often necessitating a trip by the child to the nurse’s office at lunchtime to take the midday dose.

Now a new formulation of methylphenidate has been approved by the FDA which only requires once-daily dosing. Called Concerta and manufactured by ALZA Corporation, the drug is taken in the morning, freeing the child to go about his or her daily activities without the inconvenience or potential embarrassment of having to take another dose at school. Concerta, which is produced in 18 mg and 36 mg tablets, is expected to be available by prescription before the start of the 2000-2001 school year.

Concerta is a central nervous system stimulant. The mode of therapeutic action in ADHD is not known. Concerta is thought to block the reuptake of norepinephrine and dopamine into the presynaptic neuron and increase the release of these monoamines into the extraneuronal space.

The efficacy of Concerta was evaluated in three double-blind, active- and placebo-controlled studies of 416 children ages 6-12 (ref. 1). The product was evaluated in multiple settings — including community schools, laboratory schools (specialized schools used to monitor children with ADHD for treatment evaluation purposes), and at home.

Concerta once daily (18, 36, or 54 mg) was compared to methylphenidate given three times daily (15, 30, or 45 mg total daily dose) over 12 hours and placebo in three double-blind trials. In these three studies, teachers and parents consistently reported a statistically significant improvement in attention and reduction in overactivity throughout the day among children taking once-daily Concerta versus placebo.

Concerta should be taken in the morning, with or without breakfast. Concerta tablets must be swallowed whole with the aid of liquid and must not be chewed, divided, or crushed.

Concerta should not be taken by patients who have significant anxiety, tension, or agitation, since Concerta may make these conditions worse; those who are allergic to methylphenidate or any of the other ingredients in Concerta; patients with glaucoma; those who have tics or Tourette’s syndrome, or a family history of Tourette’s syndrome; or patients who are taking a prescription monoamine oxidase inhibitor.

Concerta should be given cautiously to patients with a history of drug dependence or alcoholism. Chronic abusive use can lead to marked tolerance and psychological dependence.