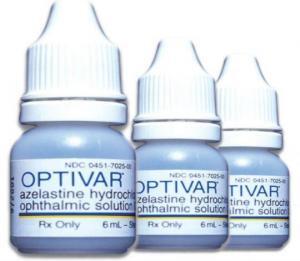 There’s a new prescription eyedrop available for the millions of Americans who suffer from itchy eyes during hayfever season: Optivar (azelastine hydrochloride ophthalmic solution). The FDA approved the drug — which is manufactured by ASTA Medica — on May 22, 2000. The recommended dosage of the drug is one drop in each affected eye twice daily. Optivar has a rapid onset (within 3 minutes) and a duration of effect of approximately 8 hours for the prevention of itching.

Azelastine is an antihistamine that is also available in nasal spray form, marketed under the brand name Astelin by Wallace Laboratories for the treatment of allergic rhinitis.

Optivar is a relatively selective histamine H1 antagonist and an inhibitor of the release of histamine and other mediators from cells involved in the allergic response, including mast cells. Based on in vitro studies using human cell lines, inhibition of other mediators involved in allergic reactions (such as leukotrienes and PAF) has been demonstrated with Optivar. Decreased chemotaxis and activation of eosinophils has also been demonstrated. 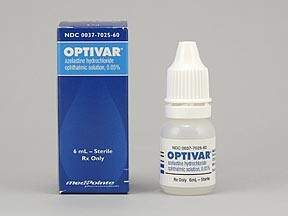 Clinical trials have established the efficacy of Optivar (azelastine hydrochloride) for treating allergic conjunctivitis in both adult and pediatric patients. In one randomized, multicenter study, Optivar was compared with placebo and levocabastine eye drops during a 14-day treatment period in 113 children (aged 4 to 12 years) suffering from seasonal allergic conjunctivitis or rhinoconjunctivitis. The primary variable was the response rate, defined as the number of patients showing an improvement after 3 days of treatment in at least 3 score points (from a minimum baseline score of 6) in the main ocular symptoms of itching, conjunctival redness, and lacrimation (each assessed on a 4-point scale). The mean response rate in the Optivar group (74%) was significantly higher than that in the placebo group (39%) and was comparable with that in the levocabastine group. Significant differences for Optivar compared with placebo were observed on days 3 and 14 in the mean sum scores for the three main symptoms and for a total of eight eye symptoms.

Another study assessed the efficacy of 0.025% and 0.05% Optivar in patients with seasonal allergic conjunctivitis of at least a year’s duration. A total of 151 patients received 0.025% or 0.05% Optivar or placebo twice daily for 14 days according to a double-blind, randomized, placebo-controlled, parallel-dosing design; 129 patients completed the study as planned. The three target symptoms, scored on 4-point scales, were itching, lacrimation, and redness of the eyes; responders were patients whose symptom sum score decreased by 3 or more points from a baseline score of at least 6 by day 3. Responder rates were 73% for 0.025% Optivar, 82% for 0.05% Optivar, and 56% for placebo. The time courses of the mean (investigators’ and patients’) scores for the three main symptoms reflected the dose-dependent effect of azelastine eye-drops.

A third double-blind, randomized, placebo-controlled study was performed to assess the efficacy and safety of 0.025% and 0.05% Optivar administered twice daily for 14 days to patients with seasonal allergic conjunctivitis or rhinoconjunctivitis. A total of 278 patients were recruited, and 226 patients were evaluable for analysis. The response rates for itching (improvement of at least one score point within the first three days) according to patient assessment were 43% for placebo, 52% for 0.025% Optivar, and 56% for 0.05% Optivar. However, a more objective assessment of the three main eye symptoms by physicians showed a concentration-dependent improvement in response rate compared with placebo (a decrease of at least 3 points from a baseline total score of at least 6), which reached statistical significance for 0.05% Optivar on day 7. In the evaluable patient population, the scores of the three main eye symptoms as well as of all eight recorded eye symptoms, as assessed by the physician, were significantly lower in the 0.05% Optivar group compared to the placebo group at day 7.

The most common adverse events reported by patients using Optivar were transient eye burning/stinging, headaches, and bitter taste, all of which were generally mild.

To prevent contaminating the dropper tip and solution, care should be taken not to touch any surface, the eyelids, or surrounding areas with the dropper tip of the bottle.