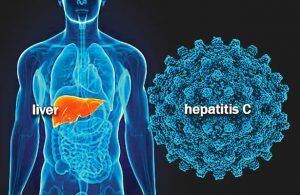 Hepatitis C virus, identified in 1988, is an RNA virus that appears to be responsible for most instances of parenterally transmitted non-A, non-B hepatitis. The virus seems to mutate frequently and appear in many subtypes. Table 49-6 summarizes the differential diagnosis of elevated liver tests suggesting non-A, non-B hepatitis other than hepatitis C. Hepatitis C virus is associated with transfusions of contaminated blood and blood products such as plasma, factor VIII, factor IX, fibrinogen, cryoprecipitate, and immune globulin.

Health-care workers exposed to a patient or the blood of a patient infected with Hepatitis C virus may acquire hepatitis C either from an accidental needle stick or without such an incident; however, the risk in such cases seems to be less than 10%. This occurrence has been documented in dialysis and oncology units and in plasmapheresis centers. Sporadic instances of hepatitis C occur and may account for 6% to 36% of the sporadic cases of hepatitis seen in urban areas. There may be unnoted percutaneous exposure among such patients. However, hepatitis C may also be transmitted by nonpercutaneous mechanisms. The epidemiology of hepatitis C has not been completely defined. 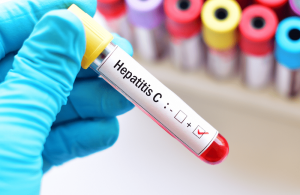 The acute illness associated with hepatitis C usually cannot be distinguished from hepatitis caused by other heterotropic viruses. However, it tends to be less severe. Usually patients complain of flulike symptoms, easy fatigability, malaise, and anorexia with occasional nausea and vomiting; fever, arthralgia, and skin rash are rare.

Transient agranulocytosis and aplastic anemia have been observed in patients with hepatitis C.

A clinical feature characteristic of hepatitis C is its episodic, fluctuating pattern of serum transaminase (alanine aminotransferase, aspartate aminotransferase) activity. Periods of elevation of these enzyme levels are interrupted by months of normal or near-normal levels of liver enzyme activity. 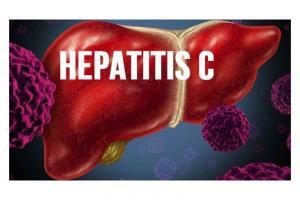 Long-term follow-up studies in patients with hepatitis C have revealed that at least 90% of patients infected with Hepatitis C virus have chronic disease. The disease may continue to appear to resolve both biochemically and histologically, followed by intermittent or constant elevation of serum transaminases. Persistent viremia can prevail in the presence or absence of elevated alanine aminotransferase activity. In fact, spontaneous total resolution of the disease may occur in only a small proportion of infected individuals.

The progression to chronic hepatitis cannot be predicted from the clinical or biochemical severity of the acute illness. Anicteric as well as icteric disease may become chronic.

Genotyping of Hepatitis C virus has been possible and has revealed few major genotypes: I (A and B), II, III, intravenous. Genotypes intravenous and I are most prevalent in the United States, comprising about 70% of infections. Genotypes V and I are also more resistant to the treatment modalities currently available.

Treatment of interferon monotherapy. Antiviral therapy for chronic non-A, non-B hepatitis preceded the identification of Hepatitis C virus as the causative agent for this disease. Several large multicenter trials using interferon-О±-2b (3 million units) three times per week for 24 weeks revealed that approximately 50% of the patients responded to therapy as measured by biochemical tests. However, relapse was common among the responders within 6 to 12 months after discontinuation of therapy. Sustained biochemical remissions have been seen in less than one fourth of the treated patients. However, when virologic criteria determination by polymerase chain reaction (quantitative Hepatitis C virus-RNA) is considered, the relapse rate is nearly 90%. Therefore, the likelihood of a sustained response to a 6-month course of interferon-О± (3 million units given three times a week SC) is approximately 10%. When such therapy is continued for 12 months, the sustained response rate goes up to 20%. Higher doses of interferon-О±(5-10 million units) may also reduce relapse rates but are associated with increased side effects and noncompliance. In interferon therapy, those patients who have positive Hepatitis C virus RNA by polymerase chain reaction assay at 3 months into therapy are unlikely to respond thereafter. Some authorities recommend discontinuation of therapy at this point. Other authorities concur that all patients be treated for 12 months. Interestingly, histologic improvement has been observed not only in patients who respond to therapy, but also in those patients whose biochemical and virologic improvement falls short of criteria for a successful response. The value of maintenance of interferon therapy is still debated, and trials are in progress.

Trials to improve the cure rates using initial high induction doses, cotreatment with ursodeoxycholic acid, nonsteroidal antiinflammatory drugs, ot rhymocin use of other interferons such as recombinant-О±-26 and -2a, leukocyte-derived, consensus interferon-О±, and interferon-ОІ preparations have not shown any meaningful advantage of any one preparation over the others.

There is no vaccine for hepatitis C at this time. Prophylaxis with serum immunoglobulin is not effective.