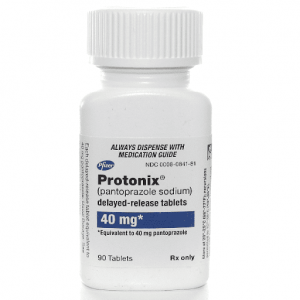 Nearly 60 million Americans experience symptoms of gastroesophageal reflux disease (GERD), a chronic condition in which stomach acids bubble up into the esophagus, causing the feeling more commonly known as heartburn. If left uncontrolled, GERD can progress to more serious complications, including bleeding, precancer, and esophageal cancer. A class of drugs called “proton pump inhibitors,” introduced in the late 1980s, has vastly improved the treatment of gastroesophageal reflux disease (GERD).

Protonix (pantoprazole sodium), the proton pump inhibitor, was approved by the FDA in February 2000. Manufactured by American Home Products Corporation, Protonix is used to promote healing and relieve symptoms in patients with erosive esophagitis, one of the most serious forms of gastroesophageal reflux disease (GERD), when taken for up to 16 weeks. Like many other drugs in its class, Protonix is easy to take: just one delayed-release tablet once a day.

Protonix works by interfering with a key enzyme system involved in the production of acid in the stomach. Clinical studies showed that Protonix was significantly more effective than placebo and nizatidine (a similar drug) for promoting healing and relieving gastroesophageal reflux disease (GERD) symptoms (daytime and nighttime heartburn and regurgitation) in patients with erosive esophagitis. The latest clinical trials also show that Protonix is effective for patients with ulcer of the upper part of the small intestine (so-called duodenal ulcers).

What You Should Know

The most common side effects reported by patients taking Protonix were headache, diarrhea, and feeling gassy – effects that are similar to those of other drugs in its class.